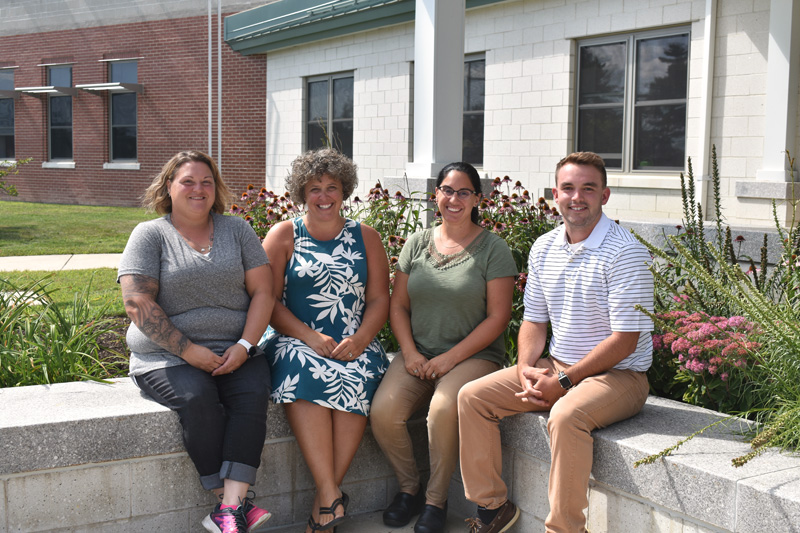 A group of new teachers at Jefferson Village School is looking forward to the start of the academic year.

The four new teachers have worked with their colleagues to prepare for classes to begin. They attended workshop days Monday and Tuesday, Aug. 26 and 27, before the first day of school, Wednesday, Aug. 28.

All four have strong connections to Jefferson. Flagg, Grady, and Pinkham live there, while Groth, of Thomaston, was married in Jefferson.

The week started with a district-wide event for AOS 93 staff at Great Salt Bay Community School in Damariscotta the morning of Monday, Aug. 26, and a teacher workshop day at JVS on Tuesday, Aug. 27.

The school hosted an ice cream social for students and parents the evening of Monday, Aug. 26.

“It’s a chance for kids and their families to see their classrooms and eat ice cream,” Flagg said.

This school year marks the first at JVS for Groth, who previously worked for RSU 13 and the Maine Virtual Academy; and Pinkham, a 2019 graduate of St. Joseph’s College. Flagg and Grady have worked at the school for several years as educational technicians.

“Amanda and I have worked here a while, but we are looking forward to putting our own spin on things,” Grady said.

Pinkham is looking forward to working as a teacher. He got into education because of his interest in athletics and coaching.

“Growing up I’ve always liked athletics and coaching. I figured if I was going to have a big boy job, I might as well have a fun one,” Pinkham said.

The group of new teachers talked about the challenges and highlights of the year ahead.

Grady described the school’s staff as well-educated and fun to work with, a statement echoed by Flagg.

“We have an awesome group of people. They are fun and really intelligent. They know what they’re doing. It’s a fun group. I’m excited to be with them,” Flagg said.

Talking about potential challenges in the year ahead, Groth said the early days of school will set the tone for the rest of the year.

“I’d like to get everything set up and running smoothly, get into a flow, and hope it lasts through the end of the year,” Groth said.

Flagg said one of the challenges for staff is keeping up with changes that come down from the Maine Department of Education on an annual basis.

“Watching all the changes in kids, it’s amazing,” Groth said.

“The schedule is pretty sweet too. When you have kids of your own, it is nice to work school hours and have vacations off the same time of year as your kids,” Flagg said.

Grady views herself as a kid at heart.

“I think I might still be a kid myself and I enjoy being around them, learning with them, and doing experiments with them,” she said.

Grady appreciates children’s perspective when an experiment does not work, and their willingness to always try again.

“They’re not let down. They want to try it again,” she said.