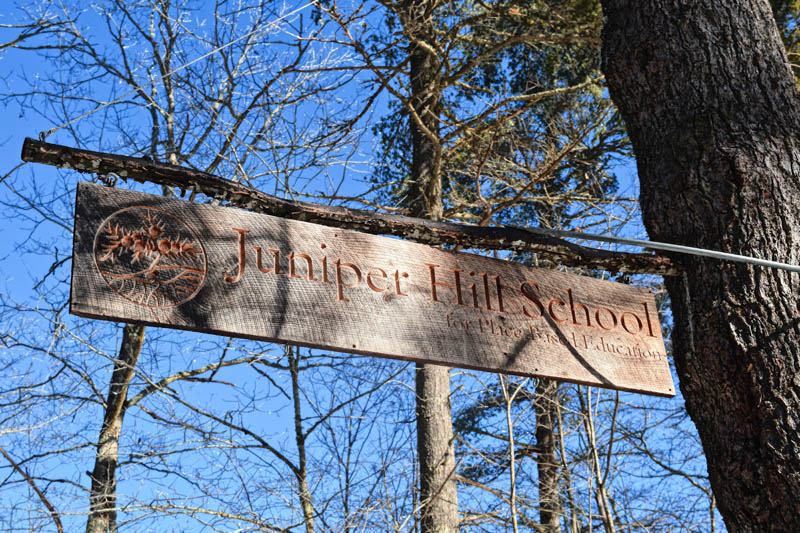 The sign at the entrance to the Juniper Hill School for Place-based Education, at 180 Golden Ridge Road in Alna. (Hailey Bryant photo)

The Juniper Hill School for Place-based Education in Alna closed in January after multiple health and safety violations and has yet to reopen.

In a typical school year, Juniper Hill had a 60-40 split between indoor and outdoor learning, but the school transitioned to a 100% outdoor program at the beginning of the current school year. It worked for the first few months, but issues arose as the weather grew colder.

“Below the surface, things hadn’t been quite right since the start of the year,” said Robin Huntley, one of the school’s co-directors and teachers until the board laid her and most of the staff off last month.

She said the school often exceeded its annual budget, but at the start of the 2020-2021 school year, the board of directors told Huntley and her co-director, Adrienne Hoffmann, that they needed to stay within a tight budget.

Huntley and Hoffmann tried to make it work, but the board soon created a new position — director of development, outreach, and advocacy — for Anne Stires, the school’s founder and former director.

The board told Huntley and Hoffmann that the position would fund itself by bringing in donations.

The cost of another position left teachers strapped for funds. “I felt like I couldn’t make any good decisions for my students,” Huntley said. She and other teachers were unable to buy new learning materials, like books, for the kids. The school teaches prekindergarten through fifth grade.

In November 2020, the co-directors told the board the situation was not working. The weather was getting colder and the school did not have adequate indoor space for physical distancing.

The school had received a donated wood stove to heat an outdoor hut, but could not afford to hire someone to install it. Many of the yurts that served as classrooms had leaks, and mold was starting to grow — on rainy days, Huntley had to move furniture and put towels on the floor to soak up the water.

Huntley said board members were “shocked” to hear about the issues and said they would work on fixing them, but the school didn’t see any changes.

A month later, Huntley and Hoffmann decided to close school for one day in December. The temperature was too low, they thought, for kids to be outside.

“Parents were really upset and confused, and so was the board,” Huntley said. Everyone seemed surprised to hear about the lack of infrastructure to keep the kids safe and warm.

The teachers came up with a plan outlining what weather conditions would require them to close school, and they “limped along” after that, Huntley said.

The next week, parents received a letter from the board saying the school would be “taking a pause,” according to Brazwell, with Jan. 22 as the final day. On Feb. 2, the board told parents that the school might reopen March 1.

The bathroom was, as described by Huntley and Brazwell, a bucket with a lid on it. Teachers had to empty the bucket nearby.

McKenzie replied Feb. 5. He said he had spoken to the board of directors via Zoom and the board told him it had a plan in the works to have an alternative toilet designed. He did not conduct a site visit, because he believed any evidence would have been washed away by rain and snow.

“The dump site has been in use for years. I highly doubt that a few weeks of weather has washed it away,” said Brazwell, who filed the DEP complaint, in an email to Crowley on Feb. 11. “I also highly doubt that it has been dealt with. Once the snow melts away I believe a site visit is warranted.” 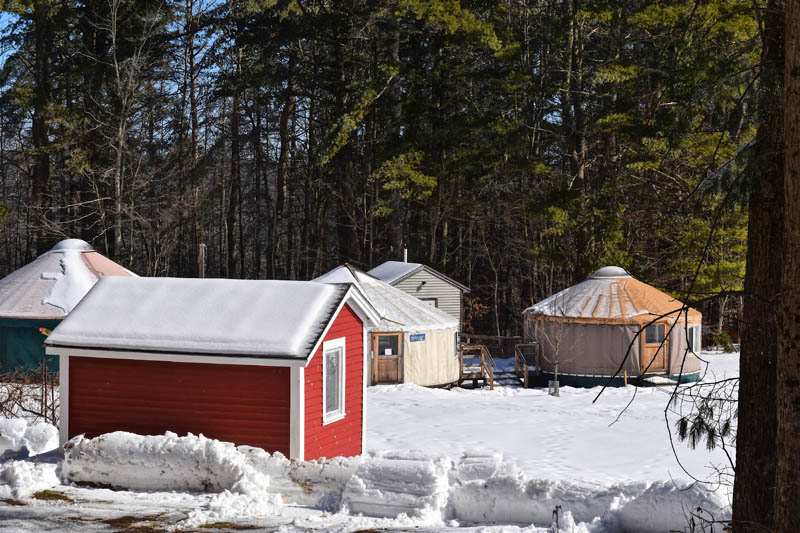 A series of yurts serve as classrooms at the Juniper Hill School for Place-based Education in Alna. (Hailey Bryant photo)

On the last day of school, Jan. 22, parents received an email saying that the school’s latest water test showed the presence of lead. Brazwell contacted DHHS and found it was not the first time — but it was the first time parents had been notified, at least since Brazwell’s kids started at Juniper Hill in 2015.

Brazwell told Pushard that, based on her school directory from the 2016-2017 school year, there were at least 40 people, including both students and staff, at the school. The student count was 25, not including part-time prekindergarten students.

The number of students reported to the Maine Department of Education in May 2016 was 10, Pushard said.

“Given the information that you have provided, I also question the honesty of the school,” he wrote in a Feb. 3 email to Brazwell. “To be honest with you, I have never been involved with a scenario as this one where a system may have misrepresented their population count to us.”

Pushard forwarded the issue to the Maine Attorney General’s Office.

According to Huntley, the school was operating in violation of its state license as well.

The annual school approval report for private schools from the Department of Education requires that schools meet standards for hygiene, health, and safety; that the school’s facilities are in compliance with health, fire, and safety codes; and that the school has written policies for administering medication and managing life-threatening allergies.

Huntley and Brazwell both said that Juniper Hill does not have any policies. There is no staff handbook for teachers and no policy to follow if a student gets injured. In an outdoor education setting, students climb trees freely and stand near open flames. Opportunity for injury is everywhere for young kids, and if a student had gotten hurt, Juniper Hill had no clear way to handle it.

The school approval report also requires that schools either be accredited by the New England Association of Schools and Colleges, which Juniper Hill is not, or provide an elementary curriculum in accordance with state law.

The school website states that its “integrated curriculum supports academic rigor. Our expectations are high of each student.” The curriculum section of the website details the school’s approach to literacy, social studies, mathematics, and more. However, according to Brazwell and Huntley, the school has never had a curriculum.

Some teachers, like Huntley, were skilled enough to educate students without the guidance of formal curriculum, and some students were natural learners who picked material up quickly. Other kids, though, had to leave the school because they were falling behind academically, Huntley said.

Huntley loved a lot about her two years at Juniper Hill. She said the school is a magical place where the students were always happy, and the concept of letting kids learn outdoors has merit. But too many things were going wrong.

If the school reopens in March, Brazwell and Huntley estimate that about five students will return, and no teachers. According to Huntley, the remaining staff members include office manager Betsy Brown, Anne Stires, and Anne Stires’ mother, Susan Stires, whom the school website lists as providing literacy support.

There were seven teachers on staff when the school closed, down from about 16 last year, and the board laid everyone off Jan. 22, Huntley said.

Neither Huntley nor Brazwell believe the school has addressed its issues in order to reopen in March.

Brown referred a Feb. 15 email inquiry about the closure to board President Warren Miskell. Board member Jamie Banks called The Lincoln County News the same day and said the board was going to meet Feb. 16 and would contact the newspaper again to arrange an interview.

Nobody from the board contacted the newspaper again, however. Miskell did not respond to multiple phone calls and a voicemail after the date of the board meeting.

(Correction: An earlier version of this article online and on the front page of the Feb. 25 edition incorrectly reported that the Juniper Hill School for Place-based Education switched from a 60-40 split of outdoor-indoor time to 100% outdoor in March 2020. The school switched to distance learning in March 2020, then returned to in-person instruction with 100% of time outdoors at the beginning of the next school year. The Lincoln County News regrets the error.)