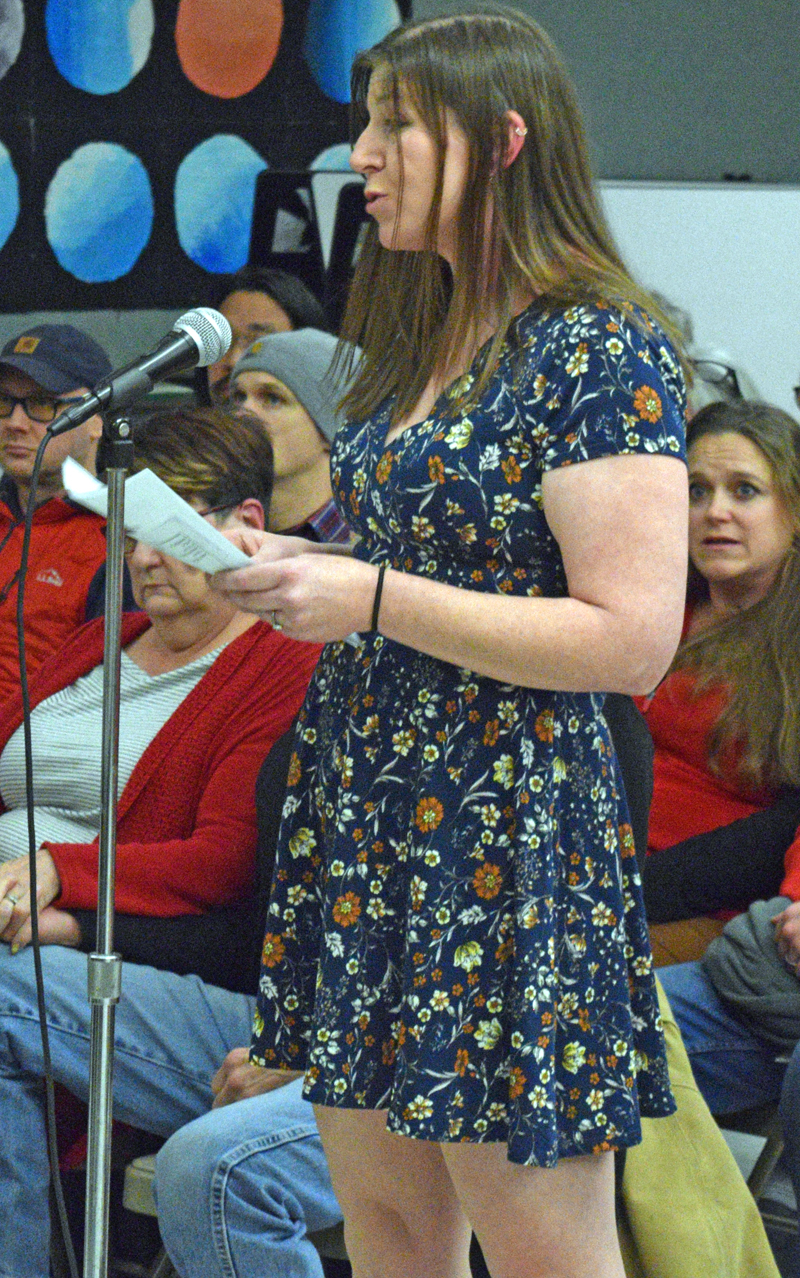 Amber Lavigne, a Newcastle parent of a student at Great Salt Bay Community School in Damariscotta, gives an emotional description of how she found a chest binder in her 13-year-old childs bedroom that she says was given to her by a school social worker. (Evan Houk photo)

The mother of a 13-year-old announced during a recent school committee meeting that she had withdrawn her child from Great Salt Bay Community School in Damariscotta after she learned a school social worker had given a chest binder to the student without the parents’ knowledge.

The mother’s statement, as well as a separate statement of support for the school’s transgender students policy, were both discussed during the public comment portion of the Great Salt Bay School Committee meeting on Wednesday, Dec. 14 meeting.

Amber Lavigne, of Newcastle, said the chest binder had been discovered in the student’s bedroom on Dec. 2. A chest binder, or a chest-compression garment, is used to bind and flatten breast tissue to minimize outward appearance, according to the Cleveland Clinic, a nonprofit multispecialty medical center.

In her statement at the Dec. 14 meeting, Lavigne did not name her child or the social worker.

Lavigne, who is the president and executive director of a local mental health group, said that under no circumstances should her child have received the chest binder without knowledge of the parents. She added that the chest binder was provided to the student without the parents’ permission, and school administration will not release the social worker’s notes from the meetings with the child.

According to state law, school counselors or social workers may not be required to release information gathered during a counseling relation with a client “or with the parent, guardian or a person or agency having legal custody of a minor client.” A counseling relation and the information resulting from it shall be kept confidential consistent with the professional obligations of the counselor or social worker.

Exceptions include if the client’s condition requires others to assume responsibility for the client, or if there is a clear and imminent danger to the client or to others, according to the law.

In her statement, Lavigne said the social worker asked the student to keep the chest binder a secret from the parents, which she said caused the student symptoms of “distress, anxiety, and depression.”

Messages left for the district administrator seeking comment on whether the social worker asked the student to keep the chest binder a secret were not answered.

During the public comment, Lavigne demanded that all employees of the district who had knowledge of the incident “be immediately terminated from their position.”

Prior to Lavigne’s statement, Great Salt Bay School Committee Chair Samuel Belknap laid out the guidelines for public comment, including the fact that the committee is not obligated to respond. The committee asked members of the public to sign up ahead of time if they wished to speak.

“Personnel matters or complaints concerning student or staff issues will not be considered in a public meeting but will be referred to established policies and procedures,” Belknap said.

Chris Coleman, a fourth grade teacher at GSB and president of the Damariscotta Area Teachers Association, also spoke during the public comment portion of the meeting, during which he showed support for the school’s transgender students policy, which can be found on the AOS 93 website at aos93.org.

The policy deals with how the needs of transgender students are addressed at Great Salt Bay Community School. In accordance with the policy, a student will be considered transgender if, at school, the student consistently asserts a gender identity or expression different from the gender assigned at birth.

“This involves more than a casual declaration of gender identity or expression, but does not necessarily require a medical diagnosis,” according to the policy.

Of the approximately 60 members of the public in attendance at the meeting, about half, including Coleman, were wearing red shirts in what Coleman called “red for education.” As president of the local teachers’ union, Coleman said the show of solidarity and support was organized ahead of the committee meeting after reading comments on social media regarding the school’s transgender students policy. 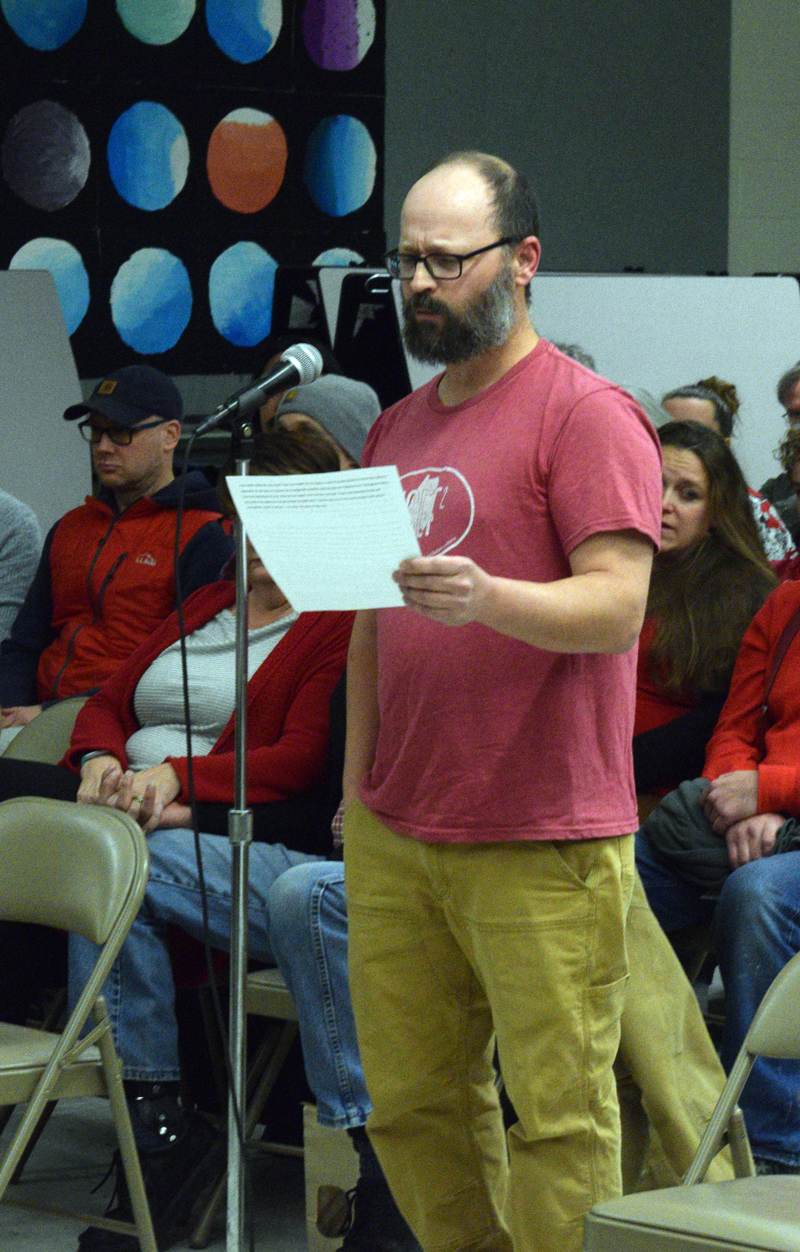 Chris Coleman, a fourth grade teacher at Great Salt Bay Community School and president of the Damariscotta Area Teachers Association, speaks about the schools transgender policy and its obligation to protect students at a meeting of the Great Salt Bay School Committee meeting on Wednesday, Dec. 14. Coleman and about 30 other people wore “red for education” in solidarity at the meeting. (Evan Houk photo)

“There was some thought that there would be a lot more people there about the transgender policy, so we wanted to make sure we showed support for the policy and our students,” Coleman said in a phone interview on Tuesday, Dec. 20. “Part of my public comment was in response to direct quotes from members of our community – not from away – about the ‘danger’ of having children in the bathrooms of their chosen identity.”

The policy includes guidance on specific issues, including how to deal with disclosures that the student is transgender, the school’s use of the name and pronouns consistently asserted at school, use of restrooms and locker rooms, and dress code. It also includes guidelines for the safety and support for transgender and transitioning students.

Coleman said some members of the community, and “perhaps some from afar, have decided that our transgender students do not deserve to feel safe at school.”

One other person spoke during the public comment period of the school committee meeting. Jennifer Oliver-Gutgsell, who described herself as a professional counselor living in Newcastle, said it has come to her attention that there is some opposition to “some of the staff at the school and their policies.”

“I would like to commend you on the policies to protect our transgender children and our questioning children,” Oliver-Gutgsell said. “Schools should be a safe place to come.”

Oliver-Gutgsell said children need reassurance and positivity and should not be discriminated against for any reason. She encouraged the community to continue to support the LGBTQ+ community and transgender children in the school.

“If they’re questioning or talking to a counselor or teacher, that they can have the support and the reassurance that they need to be healthy and safe,” Oliver-Gutgsell.

After the public comment portion of the meeting closed, the school committee dispatched with its other agenda items, including committee reports, the acceptance of a grant which will be used for the purchase of an outdoor pole barn structure, and voting to have remote learning on bad weather days.

The agenda also included two executive sessions – one for contract negotiations and the other for a personnel matter – which, by law, are closed to the public. AOS 93 Superintendent Lynsey Johnston said no action took place as a result of the executive sessions.

On Monday, Dec. 19, the school committee issued a statement to “address recent concerns that have been brought to the attention of the administration and board.”

“While the board is not able to discuss confidential student and staff information in public, the board’s first priority is always to provide a safe, welcoming, and inclusive educational environment for all students and staff,” according to the statement, which is signed by Belknap.

“When administrators receive concerns from parents and/or students about potential issues in school, the board has specific policies and procedures in place that must be followed when addressing those concerns,” according to the statement. “These policies comply with Maine law, which protects the right of all students and staff, regardless of gender/gender identity, to have equal access to education, the supports and services available in our public schools, and the student’s right to privacy regardless of age.”

When reached by phone on Monday, Dec. 19, Lavigne declined to comment, other than referring questions to her attorney, Brett Baber, and saying she plans on filing a complaint with the Maine Human Rights Commission. Baber could not be reached for comment before press time.

The next meeting of the Great Salt Bay School Committee will be held at 6 p.m. on Wednesday, Jan. 11.