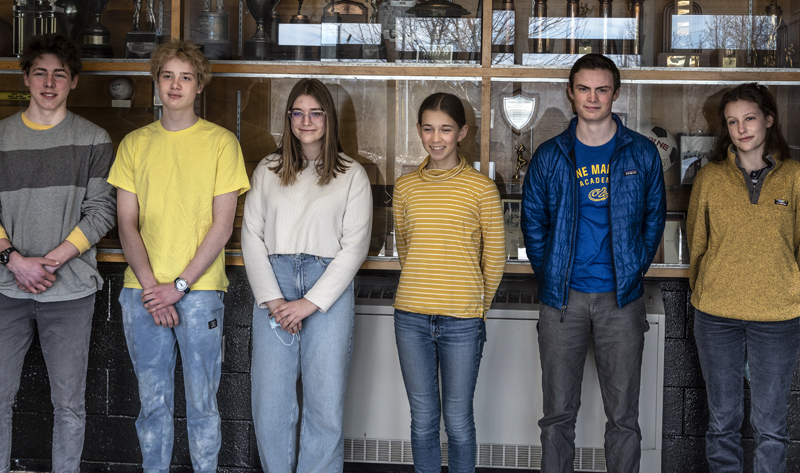 From left: Jonas Stepanauskas, Michal Maciejewicu, Flora Angyal, Audrey Hufnagel, Will Sherrill, and Marina McManus stand for a photo at Lincoln Academy in Newcastle on March 4. The six students helped focus attention on the plight of Ukraine by ringing the Lincoln Academy bell in recognition of those affected by the conflict and by sharing information on Ukraine during a school assembly. (Bisi Cameron Yee photo)

Flora Angyal, Audrey Hufnagel, Michal Maciejewicu, Marina McManus, Will Sherrill, and Jonas Stepanauskas, have a better than average grasp of the war in Ukraine.

Near the end of 2021 Russian President Vladimir Putin began to deploy military forces on Ukraine’s border for what he called military exercises. On Feb. 24 Russia invaded Ukraine.

The six Lincoln Academy students not only rang the school’s bell in a unified show of support for Ukraine on March 3, they shared their research on the conflict with fellow students during an assembly at the school the next day, the first assembly in nearly two years.

“These students are particularly well-informed and also very well-spoken,” said Jenny Mayher, the school’s director of communications. “(They) already had a base of knowledge so the presentation came together very smoothly.”

The students involved included members of the school’s Model United Nations, as well as several students with ties to Central and Eastern Europe.

Sherrill, who was a student attendee of the highly-respected Camden Conference, a nonprofit, non-partisan organization that exposes participants to the most current thinking on a variety of world issues, introduced the presentation.

He explained the geography of Eastern Europe, how Ukraine is a buffer between Russia and the west, how its long coastline along the Black Sea is of strategic importance, providing a warm water port for shipping and naval maneuvers, and how Ukraine’s Carpathian Mountains present a natural defensive boundary between east and west. 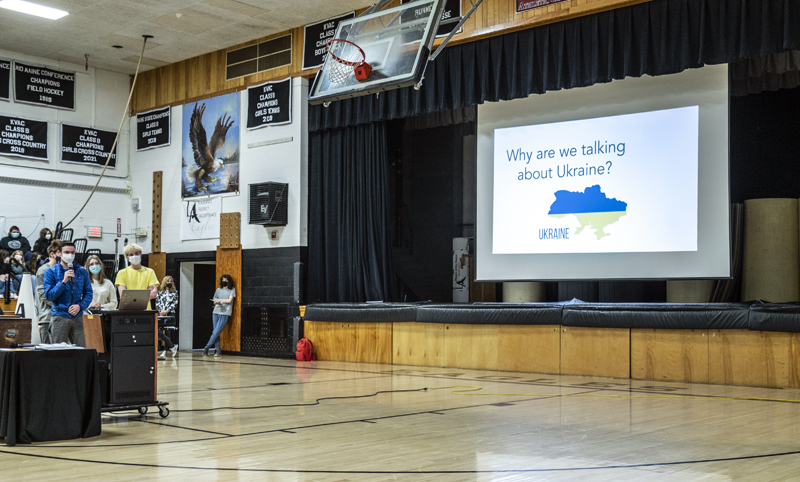 Six Lincoln Academy students present an overview of the war in Ukraine during a school assembly in Newcastle on March 4. “These guys deserve a lot of credit because they came to it with so much confidence,” said Director of Communications Jenny Mayher. “It’s a big deal. We’re talking about very serious global issues.” (Bisi Cameron Yee photo)

Then McManus spoke to the timeline of modern conflict between Russia and Ukraine, starting in 1991 when Ukraine declared its independence from the Soviet Union with 90% of its people in favor of the split. According to the presentation, Ukraine ceded its nuclear weapons in 1994 based on an agreement that its independence, sovereignty, and existing borders be respected.

McManus also provided background on the formation of NATO, the North Atlantic Treaty Organization, a political and military alliance formed after WWII specifically to oppose the Soviet Union.

There are 14 former Russian-allied nations that have joined NATO since 1999, according to the students’ research.

Hufnagel picked up the narrative, explaining how in 2014, Ukraine’s Russian-backed president was impeached by Ukraine’s parliament and how, in the same year, Russia invaded and annexed Crimea, territory that had been part of Ukraine.

She also touched on why the inclusion of Ukraine in NATO represents a potentially existential threat to Putin and why NATO’s reaffirmation in 2021 of Ukraine’s eventual membership spurred Putin to begin his military buildup.

Angyal and Maciejewicu, international students with roots in the region, covered events since the start of the year, culminating in the Feb. 24 invasion of Ukraine.

The pair reviewed the international response, how 141 nations condemned Russia’s aggression, how sanctions were deployed by governments around the world, how NATO nations supported Ukraine with military supplies, and how neighboring countries prepared for a massive influx of refugees.

According to Mayher, the presentation was designed to help students process what is happening in the world. 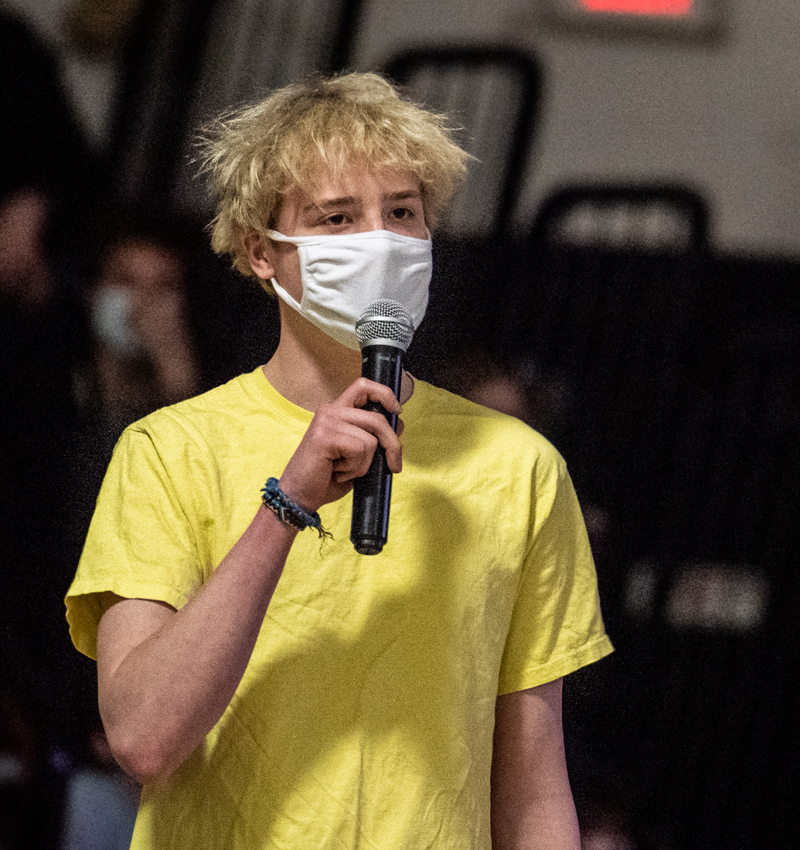 International student Michal Maciejewicu speaks to a student assembly about the war in Ukraine at Lincoln Academy in Newcastle on March 4. Maciejewicu’s mother is from Ukraine and he has family members there who are being directly affected by the Russian incursion into that country. (Bisi Cameron Yee photo)

“Our job is to help keep our students informed so they can engage with news as it unfolds,” she said. “We’ve lived a decade in a few weeks. And it’s not anywhere close to over.”

The students ended their presentation by sharing photos of Ukrainians seeking refuge in subway stations, of babies being born in makeshift clinics that offered some shelter from the Russian bombs. According to their report, 11 children were born in those improvised delivery rooms in that one week of war.

Following the presentation, the six gathered to share their individual thoughts on the crisis in Ukraine.

Stepanauskas didn’t grow up in Eastern Europe, but his father’s family is from Lithuania, less than 500 miles from the Ukrainian border. He hears about the conflict daily from relatives there, and their accounts moved him to become involved in the bell ringing and in helping to provide context around the war to his peers. Stepanauskas spent last summer in the region and usually visits Lithuania every other year.

“It’s a bit less personal because I didn’t grow up in Eastern Europe, but I can definitely understand, still, the pain and suffering,” he said.

Sherrill hopes the Ukrainians come out on top, but does not think the U.S. will contribute militarily to that victory.

“I surely hope it doesn’t (escalate),” he said. “… I think the international community has put forward that any aggression to any other country except Ukraine … will not stand. Hopefully Putin has that message.”

McManus pointed to the “overwhelmingly bipartisan support” for Ukraine and said, “I do think U.S. involvement as it currently is, which is selling arms to Ukrainian citizens, is an indicator that the U.S. is going to stay involved in the war at some  level.”

Hufnagel, along with Sherrill and McManus, is a member of the school’s Model UN team. “We can’t really know what Putin plans, what his motives are,” she said. ”Ukraine is a democracy being invaded by an authoritarian state … and I think that the Ukrainian people fighting back … that’s really important. That … sends a message to the world about the importance of democracy.” 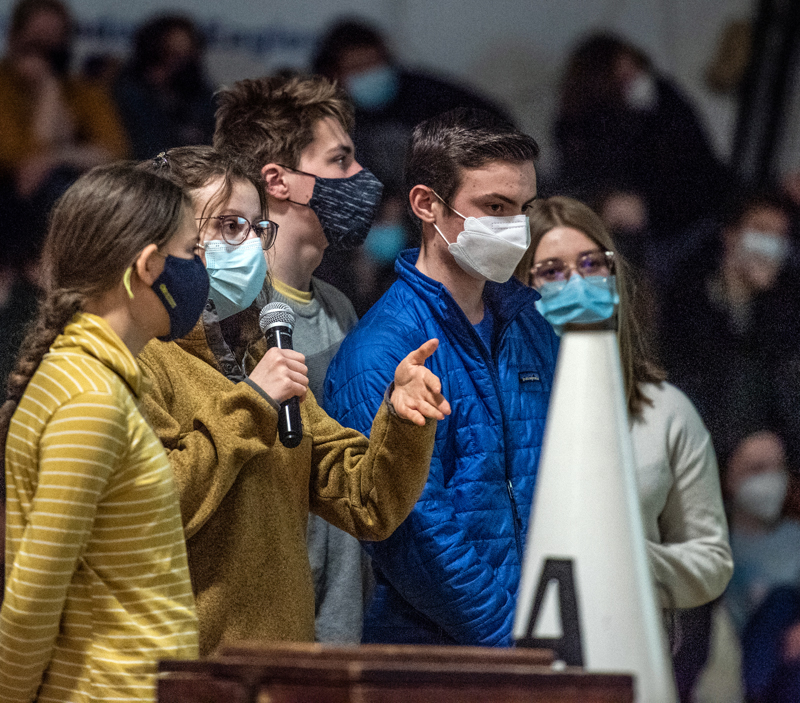 Marina McManus (with microphone) speaks to the crisis in Ukraine during a presentation by Lincoln Academy students to their peers in Newcastle on March 4. She is joined by Audrey Hufnagel to her left and Jonas Stepanauskas, Will Sherrill, and Flora Angyal to her right. The students worked together to review the contemporary roots of the Russian-Ukrainian conflict as well as the current situation in the region. (Bisi Cameron Yee photo)

Hufnagel noted that the NATO countries are very closely aligned. “Even countries like Switzerland, who have remained neutral in the past have joined with the rest of the world in these sanctions on Russia. I think that there’s actually a lot of unity in the global community around this,” she said.

Angyal is from Central Europe and she hopes the conflict remains between Russia and Ukraine. “That would be the best for everyone,” she said. “But we can never predict what’s going to happen.”

Maciejewicu has the most direct connection – his parents currently live in Poland and his mother is Ukrainian. Many members of his extended family live in the contested Donbas region, on the Russian border. He speaks passionately about the country that is such a significant part of his heritage.

While he, too, hopes the war is contained, he is more pessimistic than some of the other students.

“I do think it’s going to turn into a conflict between the Russian Federation and NATO, potentially ending up in the use of nukes,” he said.

Maciejewicu places the blame for the conflict squarely on Putin.

“All Putin’s decisions have been irrational,” he said, calling the Russian leader a man who “knows he’s going to lose … His army is suffering great consequences. The ruble is worth less than some video game currencies,” he said.

He has high praise, however, for Ukrainian President Volodymyr Zelensky.

“He is a great leader … he’s fighting on the front lines with his people. Yesterday he gave a press conference in a military T-shirt, unshaved and in (an) office reinforced with sandbags … He’s a leader that every country should have, in my opinion.”