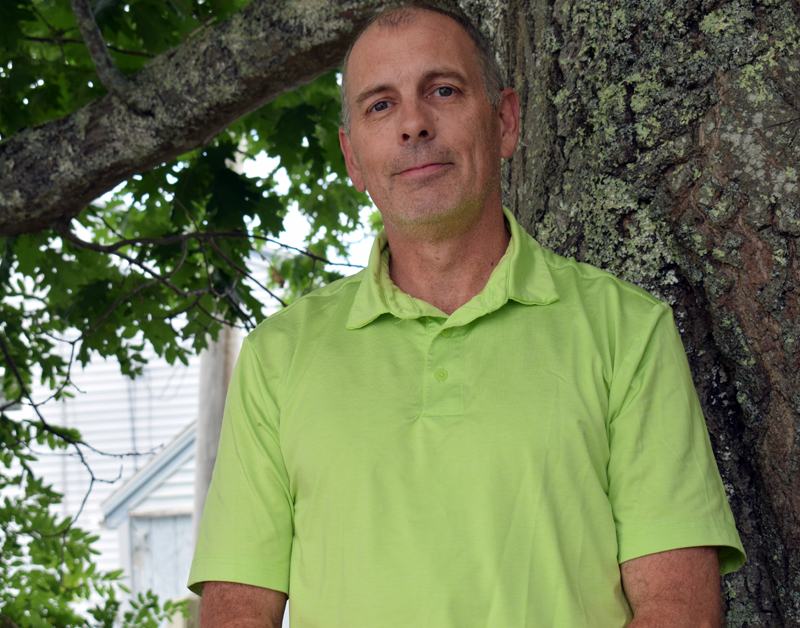 Scott White stands outside of the AOS 93 central office in Damariscotta on Tuesday, July 6. After 15 years as South Bristol School’s principal, White will now move closer to his home in Waldoboro and take a new position as principal at Union Elementary School. (Evan Houk photo)

After 15 years at South Bristol School, Principal Scott White has taken a new position as principal at RSU 40’s Union Elementary School, closer to his home in Waldoboro.

“It’s an opportunity for me to accept new challenges in my professional career and give me an opportunity to go back home where I started,” White said during an interview on Tuesday, July 6.

His last official day at SBS will be Wednesday, July 14, but White said he is getting a jump on his new position by meeting with some people at Union Elementary School on Wednesday, July 7.

White said he is anxious to get started, get to know the school and staff, and build trust in the first year.

“Really the only thing you do the first year that you’re in a school is change your socks,” White said.

After that, he looks to lead the school in whatever way fits Union Elementary School, always keeping the best interest and safety of the students at the forefront.

“A good leader is like a good coach in that you have to make adjustments based on the greater good,” White said.

Having grown up in Waldoboro, White always knew he wanted to be a teacher and coach athletics, following his father’s path into education. His father, Walter White, was a teacher at Lincoln Academy and used to enlist his son to help grading papers, starting when he was in the sixth grade.

“A lot of times I’ll see people and I’ll ask them when they went to school and I’ll say ‘I bet I graded your paper,’” Scott White said.

Andrea Powell, the longtime and recently retired kindergarten teacher at Bristol Consolidated School, has told him a story about when she was a student at LA, he said. Powell remembers him sitting in the back of Walter White’s class at LA one day when he was sick, coughing and sneezing and disrupting the class.

“It’s those kinds of stories that you only hear in Maine,” Scott White said.

Other members of White’s family have followed a path into education. His sister is also a principal in New Hampshire and his daughter is majoring in education at the University of Maine at Farmington.

Scott White started his career as a health teacher for seventh and eighth grades at what was then D.R. Gall Middle School in Union. He would go on to become assistant principal and athletic director at the school for seven years.

He then worked as principal of Warsaw Middle School in Pittsfield for a year but soon grew weary of the hour-and-a-half commute and found work at SBS.

One of the more challenging times in Scott White’s career at SBS came in the form of a cease-and-desist letter from a Washington D.C.-based organization called Americans United, which told the school they could no longer bless the boats built by the eighth grade class each year because it violated the First Amendment.

“Which was unfortunate in our little school and maritime location like South Bristol, it’s kind of a rite of passage and a tradition to bless the fleet for safety before it goes out,” Scott White said.

However, the school ended up finding some “creative ways” to still carry out the tradition, he said.

A professor teaching school law at the University of Maine at Orono, where Scott White commuted two days a week to take classes for his graduate degree, apparently disagreed with this separation of church and state in the form of a practical joke.

Scott White said the professor wore a big button the first day of class that said “There is prayer in schools,” confusing his students.

The professor told the students that the class would be the hardest they would ever take, “‘so you better pray that you’re going to do well,’” Scott White said with a laugh.

Some of the things he is most proud of during his tenure at SBS are a host of facility improvements, the implementation of a prekindergarten program this past year, traveling with the school’s jump rope team to compete across the state, the school’s Veterans Day program, and the high-achieving academic status of the school for more than a decade.

Another special moment from his time in South Bristol was when he chaperoned the annual field trip to Washington, D.C., where he was able to receive a tour of the U.S. Capitol from his son.

“It was sort of special because my son was working with Susan Collins at the time so he actually met us down there and we met Susan Collins in her office and he gave us a tour of the Capitol,” Scott White said.

Scott White said that what he enjoys most about the education field is watching students’ grow, learning their needs, and adapting to each student to give them an individualized and comfortable learning experience.

“You have to constantly be malleable in terms of figuring out what works for individual kids,” Scott White said.

He also said he has enjoyed his rapport with kids over the years and not acting like a typical principal — playing tag with students at recess or acting “goofy” from time to time.

“It’s kind of magical to watch that — when a kid shows up and might be sad one moment but you can turn it around and make it so they have a better day. It doesn’t get any better than that,” Scott White said.