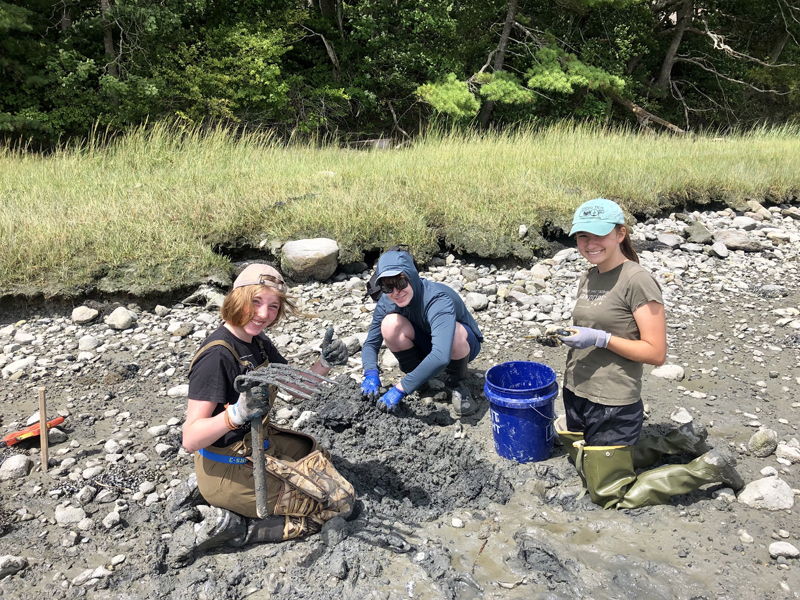 Sarah Risley, a University of Maine graduate student based at the Darling Marine Center, will lead a team of undergraduate and high school students to study the shellfish species living at several sites along the upper Damariscotta River and document local knowledge of the estuary held by fishermen and other local residents.

Together, this information will be used to help inform future management by the shellfish committee in coordination with the state’s Department of Marine Resources.

Now in its fourth season, the program will provide important information on the estuary’s ecology and the diversity of commercial and recreational activities in the river. Questions raised by shellfish harvesters and others active in the estuary are guiding the community science program.

“We are working as a team of local scientists, students, educators, harvesters and municipal leaders to collect information on shellfish and document how the estuary is changing,” Risley said.

Risley shared this summer’s field plans with the Damariscotta-Newcastle Joint Shellfish Committee when they met in January at the Damariscotta town office. Since then, she has graduated with dual masters degrees in Marine Biology and Marine Policy from the University of Maine and begun her Ph.D. work, also at UMaine.

“I’m really excited about how this project has developed over the last three years, and keen to continue working with this collaborative group, to support local shellfish and estuary management,” Risley said.

One of the primary goals for this summer is to assess the availability of shellfish larvae – also called spat – to seed populations in the estuary. To learn about the shellfish larvae in the Damariscotta, the type and number of each species will be counted by capturing them in wooden frames, called recruitment boxes. This spring recruitment boxes were placed at one site in the upper river and another in the lower river.

This community science project connects with multiple courses taught at Lincoln Academy, as well as university courses and research projects at the Darling Marine Center. This summer, students will be most involved in the green crab and shellfish ecological surveys, studying shellfish species, their habitats, and their predators. In the fall, students will collect the boxes to count the young clams and other organisms inside the boxes and later share the findings with the shellfish committee.

“We are excited about this opportunity for Lincoln Academy students to contribute to local stewardship and gain hands-on experience in marine science and civic engagement,” said Kelley Duffy, Lincoln Academy director of curriculum and key collaborator on the project.

The choice of monitoring sites was informed by a participatory mapping study that Risley and fellow UMaine graduate student Melissa Britsch conducted with harvesters, shellfish farmers, and other local experts in 2020 and 2021. Results of that mapping study are available online at tinyurl.com/DRE2021report and at the town office.

The team also will investigate the extent of wild oyster populations in the upper river and how they relate to the location of oyster farms.

“We’ve documented the importance of wild oysters to local harvesters over the last several years and are looking forward to bringing more shellfish farmers into the collaboration,” said Heather Leslie, director of the Darling Marine Center and member of the joint shellfish committee.

To learn more about this project, email Risley at sarahrisley1@maine.edu.

Founded in 1965, the Darling Marine Center’s mission is to connect people to the ocean. The center’s researchers, staff and students work alongside fishermen, aquaculture entrepreneurs, marine industry professionals and other members of the community in Maine and around the world. For more information, go to dmc.umaine.edu.

Lincoln Academy is an independent town academy in Newcastle that serves high school students from 16 towns in Midcoast Maine as well as domestic and international boarding students. For more information, go to lincolnacademy.org.