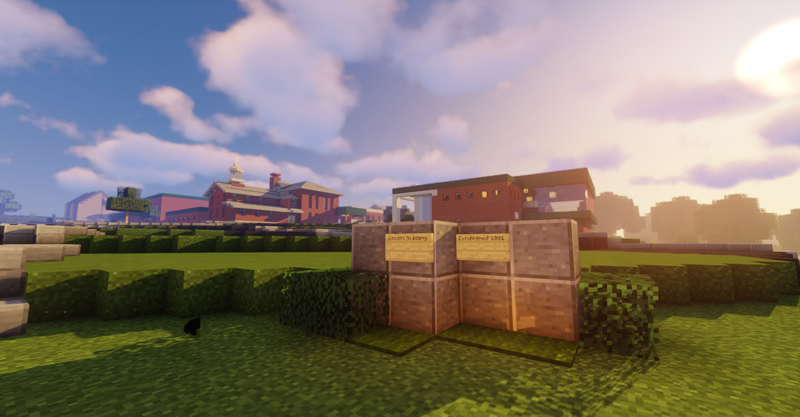 The Lincoln Academy campus in the virtual world of Minecraft reflects real-life details both exterior and interior.

As high schools and colleges around the world closed in March, many students returned to their campuses the only way that was safe: by rebuilding them in the virtual world of Minecraft. Minecraft, a sandbox video game with blocky graphics that allow users to create virtual worlds, is a wildly popular platform where millions of gamers turn to exercise their creative impulses. After Lincoln Academy closed on March 16, three LA seniors decided to tackle a Minecraft scale model of the Lincoln Academy campus.

“I heard about other schools doing it, and I thought, ‘We could do this’,” said student Benji Pugh. He pitched the idea to friends Quinn Straus and Adlai Nelson, who have shared Pugh’s love for Minecraft since middle school.

“Minecraft is such an open-ended platform and there are many resources already in place, so it makes it relatively easy to create something like this,” said Straus. “It’s also so popular that it’s easy to get other people involved. Lots of kids already have Minecraft accounts.”

The campus project is part of a larger initiative to build the entire earth within Minecraft.

“The entire topography of the world is already put into Minecraft, so you can access the basic structure or any particular place,” said Nelson. “A lot of advanced mapping is already done to make the modeling work, so things are not distorted.”

While the outlines are in place, building a campus still requires hours of work rebuilding architectural details into a place.

“The Minecraft terrain generator takes topography and mapping data, then generates trees and roads and some outlines of the land,” said Straus. “It’s not perfect, but it makes things a lot easier.”

Toggling between the Minecraft server and Google maps, Pugh, Straus, and Nelson built the three-dimensional LA campus brick by brick. Creating the basic exterior of the campus took about a week.

“We did it over April break, so we had more time,” said Straus. “Each of us spent a couple hours a day. It’s not a huge campus, but it does have a lot of details. We had to come up with different workarounds—it’s weird to build in Minecraft because everything is a one-meter block, and the world isn’t really like that. There was a lot of problem-solving around how we orient everything within that scale.”

“Most of the time when I play Minecraft, it is in ‘survival mode,’ which has constraints of time and resources to create a challenge,” said Nelson. This project was done in “creative mode,” which grants access to unlimited materials without having to collect them. “Here we were constrained by reality: how do you make it really look like campus using the tools we have and our own memories? It was a fun problem to solve.”

The experience has given the three seniors a chance to connect with their school while the campus is closed.

“It was an awesome experience,” said Pugh. “We had to think about all the details on campus that we don’t really think about most of the time. You can see the top-down view by looking at Google maps, but you have to think about all the different views to build a 3D model. One example was the courtyard of KB Hall. I have really only spent time there once, back when I played in the jazz band for a graduation party two years ago. I had to relive that memory—really picture it—in order to get the details right. It has been a fun way to go through my high school memories and put those into reality.”

“It has been a cool experience,” said Straus. “Even though I have been at LA for four years, you don’t always notice the little details of how everything fits together. This project helps you know the school better. It is nice to maintain a connection to the school while we are so isolated from it.”

Now that the campus model is in place, the three designers have transferred it to a public Minecraft server and opened it to any Minecraft user who wants to help finish the project. Around 20 people have already added details and helped the original designers finish the interior of the buildings.

“Some of the interiors have been built and look fantastic, especially advisor classrooms. The Dining Commons looks great, with all of the country flags up and everything,” added Pugh.

Now that the model is constructed, people can also hold events within the virtual world.

“A couple of us went into the band room during our [virtual] band meeting this morning,” said Pugh. “Eventually we could hold other events, like prom and graduation. They would have to be organized, but the server has plenty of space!”

Any Minecraft user who would like to visit the LA campus model can add the server lincolnacademy.apexmc.co in their Minecraft account.