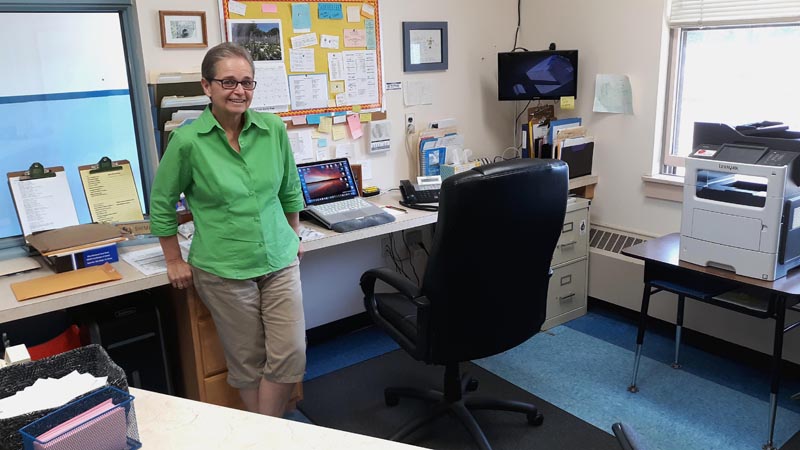 Sue Shiminski has been at the helm of the office of Bristol Consolidated School as the administrative assistant for 22 years. (Candy Congdon photo)

Bristol Consolidated School is losing one of its key personnel this year as Sue Shiminski retires from her role as administrative assistant for the school at the end of the current school year. Shiminski has completed 22 years of service to the school, serving under five different principals.

“She keeps things running so that the teachers have what they need and the parents can communicate with us,” said Principal Jennifer Ribeiro. “Sue is the public voice for the school, in some ways more than I am because of the number of people she talks to every day.”

Ribeiro appreciates that Shiminski directs callers, often vendors or community members, to just the right people at the school. Ribeiro noted that when the school has community events, Shiminski works to make sure they have programs for the event. “I think any program that goes out for some music event or whatever, she’s had some hand in it,” Ribeiro said of Shiminski. “She’s very good at it — that balance of pizazz as well as clarity.”

Ribeiro says Shiminski’s strengths are both organization and creativity, “like her decoration of the two posts out in front of the school with snowman designs this winter. Sue keeps the office seasonally decorated. She does the bulletin boards; she does the website. She ensures that there’s a welcoming space.”

The principal notes another of Shiminski’s strengths is managing the finances. Shiminski helps maintain the school budget by keeping an eye on all requests. She monitors it, entering everything into the system. Shiminski works closely with Ribeiro to find ways to accommodate budget item requests whenever possible.

Shiminski comes from upstate New York. When asked what brought her to Maine, she said it was her husband. He had vacationed here for many years in Pemaquid, and his sister lived here. When they decided to move here, Shiminski’s husband had applied for and later was accepted for an apprenticeship at Bath Iron Works. Years later, after being a stay-at-home mother, Shiminski started her job at Bristol Consolidated School. She said the school had a lot more students at that time, in the late 1990s — about 300 — so it was a lot busier place than now. The school’s population is currently under 200.

Shiminski hesitated when asked if there were parts of her job she didn’t like. “Maybe budget time,” she said. “But it’s nothing to do with the people.”

When asked what she would miss most about her job, she said, “I’m going to miss the kids and the staff. That’s a given. But I think the routine of coming to work every day is going to be the hardest for me. I’m a very routine person.”

Shiminski’s plans for retirement include becoming a full-time quilter. She began getting into quilting about 10 years ago. She’ll also be doing some traveling, with three trips having been already planned with her sister for this fall and winter.

Looking back over 22 years, Shiminski says she has absolutely loved her job. “I don’t ever get up in the morning and think ‘I don’t want to go to work today,’” she said. “It’s a great staff. The kids are great. It’s the whole experience. I’m going out on a good note.”

“She’s organized, consistent and reliable,” Ribeiro said of Shiminski. Looking ahead to how Shiminski will be missed by everyone at Bristol Consolidated School, Ribeiro said that teachers in particular are going to be so sad when they realize, “Oh, wait. Sue used to help me with that!”