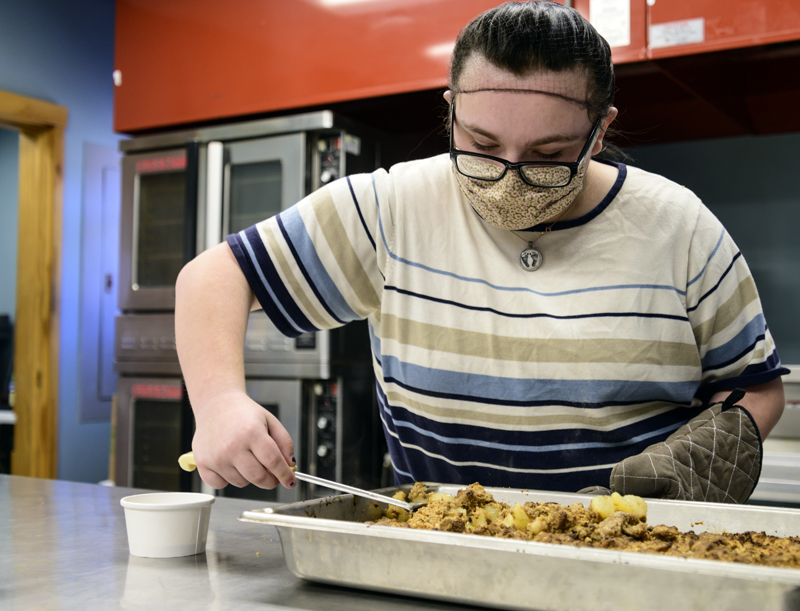 Kiara Luce scoops out a serving of apple crisp in Whitefield on Wednesday, April 14. The remainder of the tray was served to Luce’s class for breakfast the next day. (Bisi Cameron Yee photo)

The Cook-off is a statewide culinary competition in which two-person teams consisting of a student and a member of the school’s nutritional staff prepare meals that promote the use of local ingredients.

According to the Maine Department of Education, “the goal is to recognize school nutrition professionals and students for their culinary skills and creativity while producing high-quality meals that can be replicated in a school kitchen.”

Whitefield will represent RSU 12 against South Portland’s Kaler Elementary at the Child Nutrition Culinary Classroom in Augusta. Dill and Luce will be given matching, monogrammed chef coats and skullcaps to wear during the competition.

Luce and Dill will have to create breakfast and lunch for the judges. The meals must feature three local ingredients, including a specific ingredient for each: eggs for the breakfast entree and parsnips for the lunch entree.

The meals must maintain a focus on nutrition by including whole grains and fruits or vegetables. The team must also use at least one U.S. Department of Agriculture food.

According to the USDA, it “supports domestic nutrition programs and American agricultural producers through purchases of 100% American-grown and -produced foods for use by schools.” Some of the USDA commodities Luce and Dill will use include canned apples, rice, Maine blueberries, and Maine sea salt.

Mike Flynn, director of student nutrition services for RSU 12, signed the district up after receiving an invitation to participate in the statewide competition.

He tapped Dill to represent RSU 12 and Dill picked Luce after asking teachers to recommend a student who might have the interest and work ethic to make a good student partner.

Dill, who started cooking professionally at a roadside diner when she was in junior high, has worked in school kitchens for 25 years. This is her second year at Whitefield. Dill said she likes smaller country schools.

Dill enjoys working with Flynn, a proponent of more fruits and vegetables on school menus who encourages RSU 12’s cooks to try new items and to cook from scratch. “I feel I can help broaden the taste buds of some little ones,” Dill said.

Flynn devised Whitefield’s menu for the competition. Breakfast will be a breakfast burrito filled with eggs and peppers wrapped in a whole-grain tortilla and served with a blueberry smoothie made using local yogurt.

Lunch will be a play on fish and chips featuring baked haddock, fresh from the coast of Maine, with parsnip chips sliced into rounds and roasted. Dill and Luce discussed whether to cut the parsnips on a bias or cut them in rounds and, after testing, determined that rounds were the better choice.

Rice pilaf made with a stock from chicken bones and vegetable trimmings will also accompany the fish, and apple crisp will be offered for dessert. Dill said most of the recipes were sourced from USDA cookbooks.

On Wednesday, April 14, Luce and Dill completed the first test run of their menu. The rules state that the team will have one hour of kitchen time to cook their breakfast menu and prep their lunch components, and a half-hour after breakfast is judged to complete and present their lunch offering.

For their test run, Luce and Dill focused on recipes over speed, ensuring they knew the steps to create the individual components. Dill turned out the burrito while Luce practiced making the crisp.

During the next practice, they will run the clock. “We can talk or we can be quiet and focus,” Dill said. “I would like to get a dialogue going. I want it to be comfortable.” Dill hopes they will be able to practice two or three more times before the big day.

Luce said she used to think healthy foods were “gross,” but now she thinks “the way we’re doing it tastes really good. When you’re eating it, you don’t realize that it’s good for you.”

“I like cooking. It’s something I want to learn more about,” Luce said. “I thought this would be a good experience for me to learn.”

One new thing Luce learned was the “dry hand” method of breading fish, dipping the fillets in oil with one hand and then using her other hand as a “dry hand” to roll them in a combination of breadcrumbs, Parmesan cheese, and parsley from the school’s garden. This method prevents the dry coating from clumping up and ensures that more of it adheres to the fish.

Luce said she has been helping her parents more with dinner since she’s been involved with the program.

“I wish it was not so strict with COVID so I could have student workers,” Dill said. “This is a good introduction to food service. It would have been awesome to have Kiara here all year.”

Luce dons a pair of oven mitts and carefully pulls her apple crisp out of the oven. She scoops out a serving and takes a taste. “I did good,” she said.