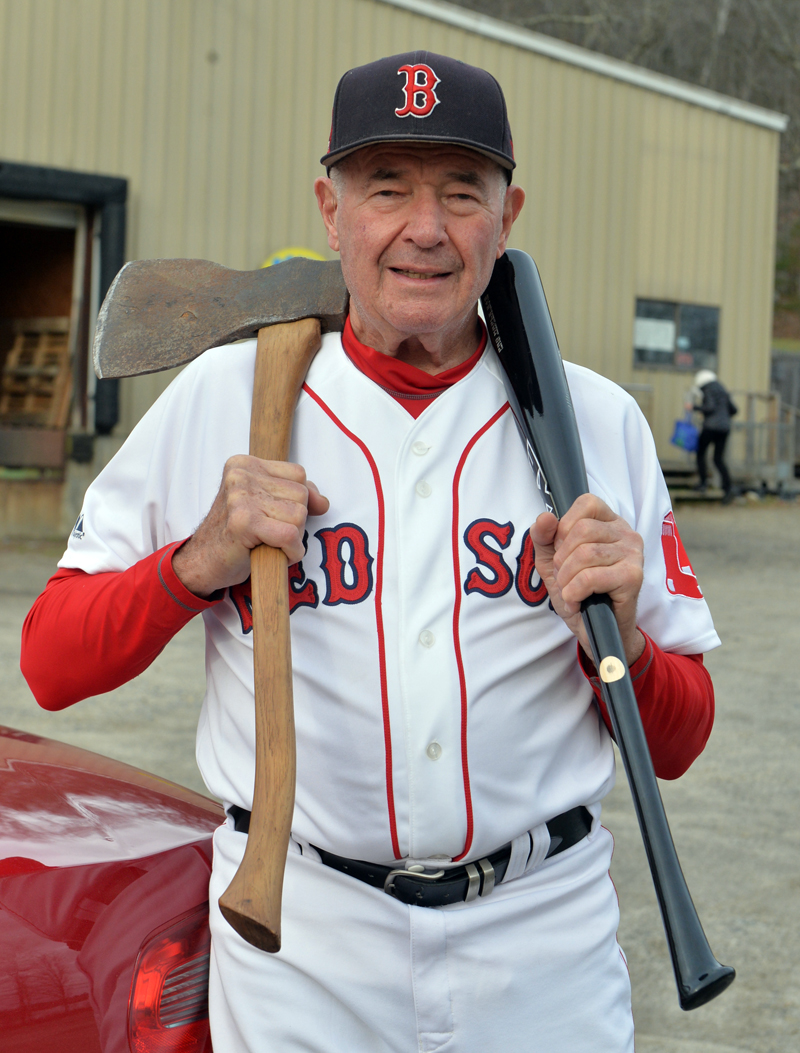 Bud Elwin, 83, of Walpole, holds an axe and an axe bat, similar to the one used by Ted Williams. (Paula Roberts photo)

Chemotherapy for bladder cancer a year and a half ago and the solitude of the COVID-19 pandemic left 83-year-old Walter “Bud” Elwin, of Walpole, rundown and out of shape.

His wife of 62 years, Janet, told him he was not standing straight and suggested he go for physical therapy. He took her advice and started going to LincolnHealth two days a week, which led to daily exercise at home. He knew he needed to get his body moving again, but he needed motivation.

His thoughts turned to baseball, which sparked him to get in shape to prepare for his fourth Red Sox Fantasy Baseball Camp. He attended the camp in 2010, 2011, and 2012. Elwin heads to Ft. Meyers, Fla., for his fourth camp Jan. 14-24 at the Jet Blue Park complex, the home of the Red Sox spring training. He will be the oldest person to ever attend the camp by five years.

After recovering from cancer, Elwin said he needed something out in the future to aim for.

“It gave me the incentive to exercise,” Elwin said. “I had to pace myself. I did not start running and throwing until about six weeks ago. My body is doing fine. It is not cracking and creaking.”

Eight weeks ago he started working out every Monday with coach Gerry Billings, who has worked with high school and college players for 30 years, at the Brunswick Rehabilitation Center. Billings works with Elwin on his throwing, hitting, pitching, playing first base, and fielding.

Elwin also works out at the CLC YMCA on different strength exercises with Becky Drum, and he also continues his daily exercise routine at home, including squeezing rubber balls to develop his forearm muscles for hitting.

He plays catch with himself using a new throwing sleeve that fits over his arm. He can throw or pitch the ball and it stays right in the sleeve.

“I am probably in better shape than I was 30 years ago,” Elwin said. 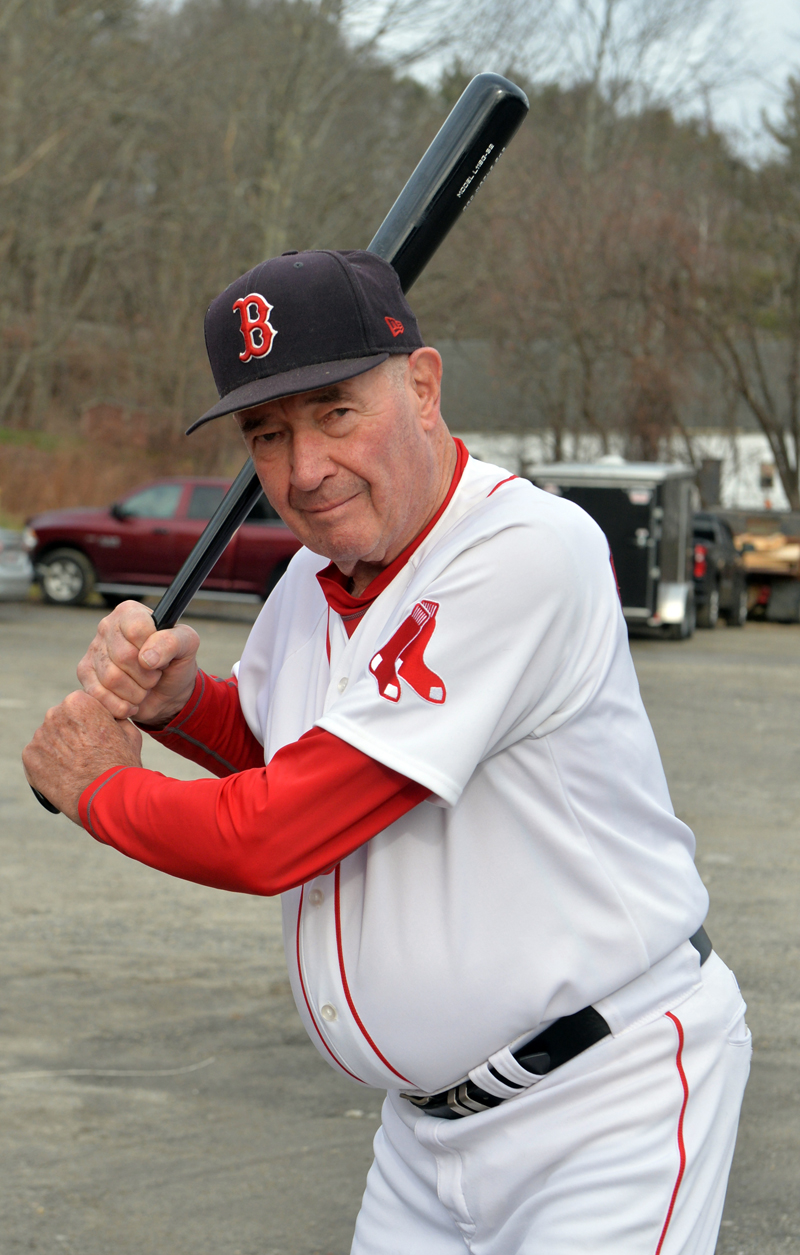 Bud Elwin is ready to take his bats at his fourth Red Sox Fantasy Camp in Florida next month. (Paula Roberts photo)

Elwin said his fourth time at the Red Sox Fantasy Camp is more special, as people his age typically are not going away to play baseball for one week.

“I am really excited, I have learned so much on YouTube about hitting, throwing, and fielding,” he said. “I am bringing a new Bud to the camp.”

One hundred and nineteen other baseball enthusiasts will attend the camp. The men will be divided into 10 teams, managed by former Red Sox players. Elwin expects about 25 former players to be running the camp.

“You have to be 30 and your check doesn’t bounce,” Elwin said of the requirements to attend the fantasy camp.

He will be trying out for first base and pitching. Each team will play two seven-inning games a day for eight straight days. On the final Saturday, campers will take on the former Red Sox players.

In August, camp participants are invited to play a game at Fenway Park, which Elwin described as “very special.”

Players have a free agent signing and receive a contract at fantasy camp before being assigned to their managers. When Elwin attended the camp in 2010, Frank Viola and Mike Easler were his managers on a team called The Hitmen. At his most recent trip in 2012, Bill Lee was his manager on a team called Lee’s Lefties.

During that same camp, Elwin was presented with the Mr. Hustle Award and received a crystal trophy. He gave the trophy to his grandson with the condition he runs to his position. If he fails to run, Elwin will take the trophy back.

“It is amazing,” Elwin said. “We get our own lockers and uniforms.”

Uniforms are cleaned every day and hung neatly in their locker. Elwin wears uniform No. 9, in honor of Ted Williams, his hero.

Elwin fell in love with baseball and the Red Sox while growing up in Somerville, Mass. in the late 1940s. He can remember going to the field at 9 a.m. to purchase a 50 cent bleacher ticket. He watched the great players of the game, including Williams.

“There were no reservations in those days,” he said. “You could sit in any seat available. In double headers, there was only a half hour break between games.” 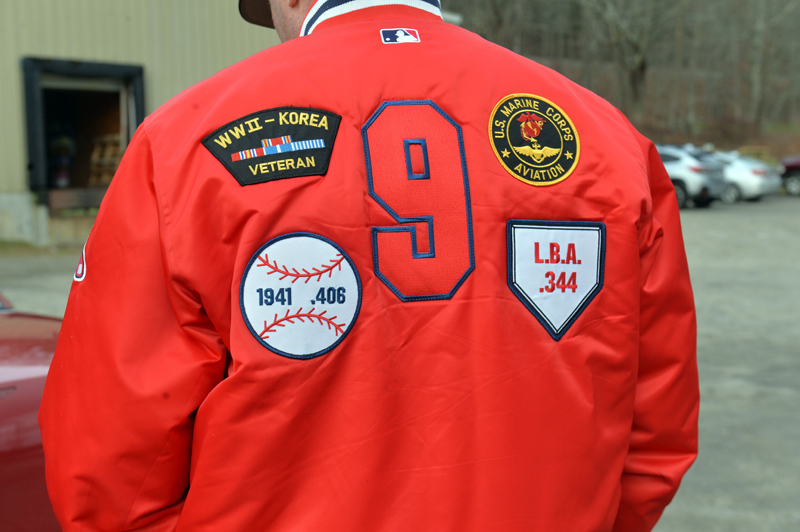 Bud Elwin had this jacket made to commemorate Ted Williams career, both in the military and as a Boston Red Sox player. It commemorates Williams’ career in the Navy during WWII and Korea, in the Marines as an aviator, his 1941 .406 batting average, and his lifetime batting average of .344. (Paula Roberts photo)

His mother, Florence, who was born in Canada in 1915, was a huge Red Sox fan. She had never seen her team win a World Series, until 2004. She was too nervous to watch it live, and watched a recording. The Red Sox were down three games to none against the Yankees, then won four straight to win the American League pennant. The Sox then took St. Louis Cardinals in four games to win the World Series. 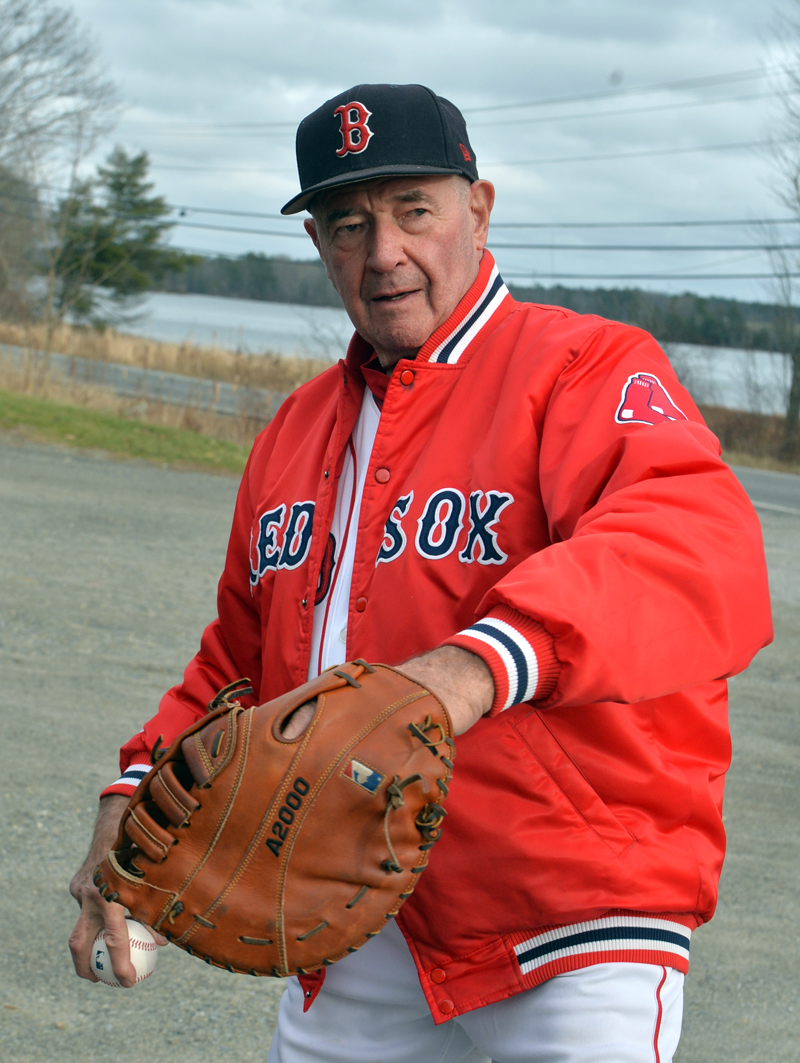 “All my prayers were answered that year. I can’t ask for anything else,” Elwin said. His favorite Red Sox hat is the one commemorating that 2004 World Series championship.

After his mother’s death, Elwin scattered her ashes in three places honoring baseball greats and the Red Sox, including the Baseball Hall of Fame in Cooperstown, N.Y. around a tree donated by Canada, at the Red Sox training camp in Florida, and along the first base line at Fenway Park in Boston, Mass.

A Williams fan all his life, Elwin started reading books about him in the 1970s. While shopping with his wife at the Christmas Tree Shop in Portland, he found the book “It’s Only Me,” by John Underwood. Inside was a 62-minute CD of Underwood’s interviews with Williams about his childhood, baseball, his experiences as a Navy pilot, and being a reservist in the Marine Corps where he was drafted in the Korean War.

Williams flew an F-9 that landed on an aircraft carrier; he was a wing man for John Glenn; and his plane burst into flames on one his 39 missions in Korea.

In addition to his induction into the National Baseball Hall of Fame and Museum in 1966, Williams was also inducted into two fishing halls of fame. Elwin visited Williams’ fishing camp in Canada. Williams’ former guide gave Elwin four different flies tied by Williams.

One of Elwin’s favorite past times is giving free talks about Williams from his birth to the 1999 All-Star game. Elwin has gone to nursing homes, civic organizations, and schools, bringing along uniforms and Red Sox memorabilia. He even dresses up the audience in Red Sox uniforms. His talks last 30 to 60 minutes. To arrange a talk, call him at 592-8131.

“I enjoy it,” Elwin said, of giving talks on Williams.

He also is a history buff for the New York Yankees.

Williams was a philanthropist. He got involved with the Jimmy Fund. Pictures of him adorn the walls of the second floor of the Dana Farber Institute in Boston. Like Williams, Elwin loves to give back to the community, especially when it comes to kids.

In 2011, Healthy Kids lost their funding, and Elwin went to bat to help. He purchased 25 Red Sox and Yankee uniforms and set up a table in downtown Damariscotta, where he sold raffle tickets on them. Once a week he pulled a name and gave away a shirt. At $5 a ticket, he raised $6,000.

During the Damariscotta Pumpkinfest, someone decorated a pumpkin like a baseball to draw attention to Elwin’s fundraising efforts. A Falmouth woman’s husband was a fan, and she sent a check for $12,000. Elwin helped organize a golf tournament in September that brought the total raised for Healthy Kids to $22,400.

“I just love kids and love to give back to community,” Elwin said. 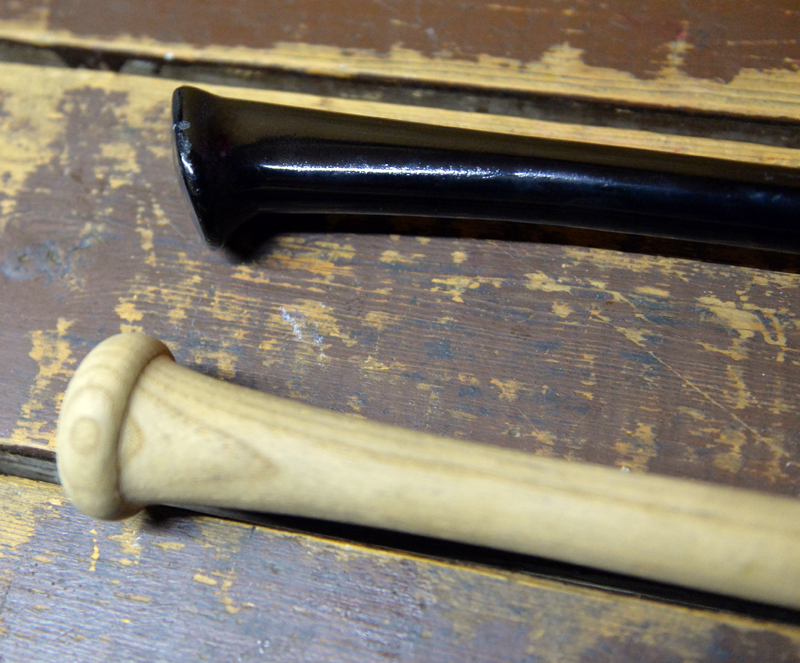 Elwin will be using an Axe Bat at fantasy camp, which is the style used by Williams. The bat has an axe handle at the end, instead of the typical knob. He has purchased several of them and gives them away to area schools. He even has an Instagram account at @budatbat.

“I have teamed up with people who make Axe Bats. They are interested in following me and are doing a blog on me,” Elwin said.

The fantasy baseball camp games are free and open to the public, as will be the game at Fenway Park in August. Elwin’s first year of camp, his family got a free tour of the park.

“My grandson had his diapers changed on the Red Sox bench,” Elwin said.

Anyone wishing to attend a game in Florida or Fenway can do so by calling Elwin. 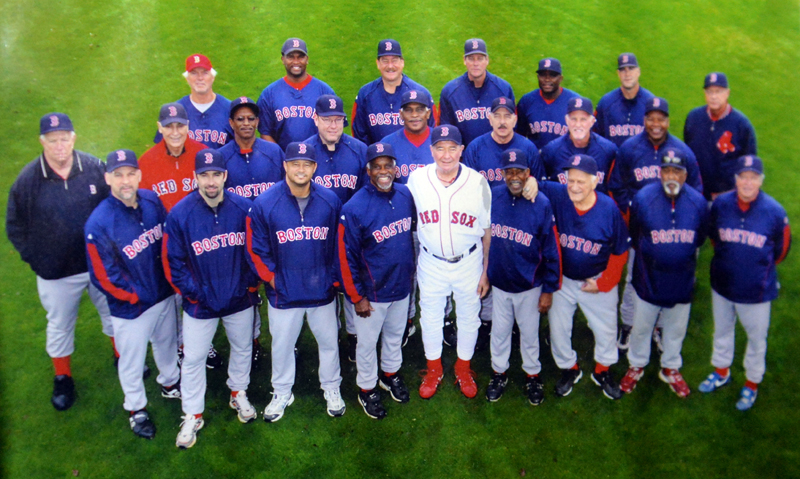 Bud Elwin (in white) poses for a picture with former Red Sox players at one of the three fantasy camps he has attended in Florida. (Paula Roberts photo)

Elwin’s batting average in three games at Fenway Park is .333.

“Every time I got on base, I scored. Someone said I was lucky that I got to touch all three bases and home plate,” Elwin said.

Elwin retired from Hewitt Packard after 33 years. He served in the Air Force for four years from 1957-61 working with flight surgeons during the Korean War.

“I want to be the best I am capable of being. I wanted to do the work to get there, bringing me back from going downhill after cancer and COVID,” Elwin said.

“Ted Williams’ family had him cryogenically frozen. I’m the defrosted version of him. It is never too late to turn things around in your life. All’s you have to remember is age is just a number,” Elwin said.