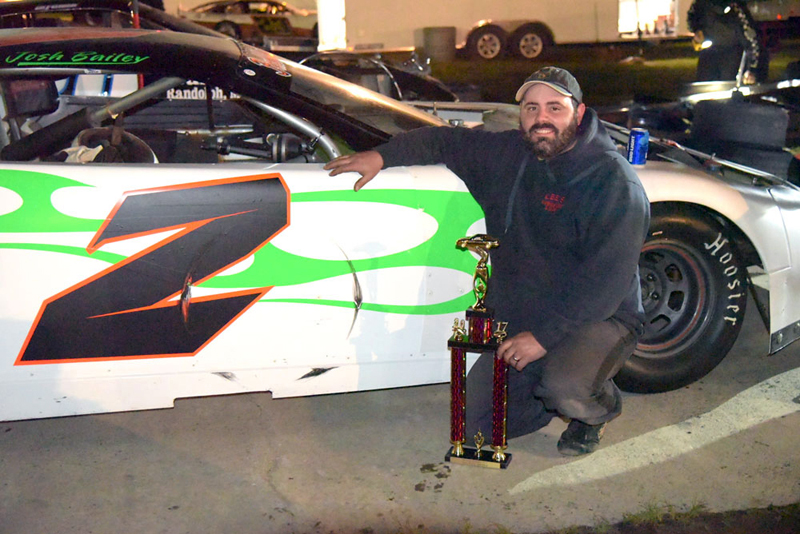 Josh Bailey was eventually was declared the third-place winner in the Super Streets on June 17 at Wiscasset Speedway after the first-place winner was disqualified. (Photo courtesy Mary & Peter Taylor petespicks.smugmug.com)

One probably won’t find many drivers that are having more fun on a race track these days than Thunder 4 Mini racer Logan Melcher. Who could blame the second-generation racer from Jay? He is, after all, undefeated to start the 2017 season. His most recent win, though, was a bit more challenging than the first two. The Thunder 4 Minis had the 35-lap spotlight feature Saturday night, June 17, at Wiscasset Speedway as Group 1 was in action on Maine’s fastest track. Melcher navigated his way through the pack only to roll into victory lane to claim the second-place trophy. But a disqualification in post-race inspection for the initial winner, followed by required engine inspection, finally produced his third win of the season. Other winners of the night included Spencer Wenners in the Go-karts, Mark Lucas in the Super Streets, Austin Teras in the 4-Cylinder Pros, and Daren Ripley in the ServPro of Biddeford-Saco Prostocks.

The program started with a special “Flex division” race with a 15-lap exhibition tilt for Go-karts. The large group of fans got to see a handful of young kids showing their talents on Wiscasset’s inner front stretch go-kart track. Wenners, of Edgecomb, picked his way up from the back of the pack to claim the lead just before halfway and then held off a late challenge from Noah Alexander, of Orrington, for top honors. Wenners had also won the first go-kart exhibition race the year before. Alexander was strong in his first race, finishing second. Wyatt Oakes, of Boothbay, wasn’t able to break free of traffic in time to challenge the lead pair and settled for third.

In the 35-lap spotlight feature for the Thunder 4 Minis, Travis Poulliot, of South China, looked like the man to beat as he pulled out to a commanding lead of a full straightaway. A handful of cautions gave the likes of #3 Jeff Minchin, #58 David Greenleaf, and #80 Donald Mooney a shot at Poulliot, while #41 Melcher and #26 Michael Golding made their way up from the back of the pack. By halfway, Melcher had raced his way into second but wasn’t able to reel in Poulliot. A pair of late race restarts gave a test to the pair, but Poulliot came out on top both times and ran under the checkers to claim the win. However, that result did not stick, as Poulliot’s car failed post-race inspection. Melcher was handed the win, his third of the season. But with the third win came a mandatory engine inspection, which Melcher passed, solidifying the victory. Goulding moved up the finish order to claim second and Greenleaf notched a career-best third place. Spencer Sweatt and Devan Robinson filled out the top five in the final order.

In support action, Thomaston’s Daren Ripley led the 40-lap feature for the ServPro of Biddeford-Saco Prostocks from wire to wire for his first victory since 2014. In an emotional victory-lane celebration, Ripley dedicated the win to his uncle Dick Ripley, who had passed away last year. The race had a couple of early cautions that thinned the starting field of 13 but then settled down into a long green flag run. Multitime champion Scott Chubbuck chased down Ripley to wage a mid-race challenge but faded back to finish second by a half second. Ajay Picard, of Palmyra, started 12th and ran a strong race to finish third. The top five was filled out by #29 Kevin Morse, of Woolwich, and #23 Brandon Sprague, of Edgecomb, each turning in a season-best finish.

The 25-lap feature for the Super Streets turned out the best battle of the night as #02 Jason Curtis, of Hollis, raced door to door over the final 10 laps with defending champ #5 Mark Lucas, of Harpswell. With Curtis on the inside lane and Lucas on the outside lane, and the fans yelling in excitement, the two charged out of turn four to the checkers with Curtis taking the checkered flag by just .005 of a second. Things took a turn once again, much to the dismay of Curtis, as his car failed post-race inspection, handing the victory over to Lucas, the second straight win for the reigning Driver of the Year. #11 Jason Oakes, of Boothbay, claimed the second-place trophy and former champ #2 Josh Bailey, of Wiscasset, was bumped up to third. #9 Sean Johnson and #85 Michael Harrison, of Durham, completed the top five.

Austin Teras jumped out of his usual Nelcar Legend ride and into a 4-Cylinder Pro for the first time. The mission was successful for the young man from Windham as he charged up from the back of the field to claim victory in the 25-lap feature. Once Teras took charge of the race, attention soon turned to the entertaining fight for second between #12 Max Rowe and three-time defending champ #98 Kamren Knowles, of West Gardiner. The pair traded the spot back and forth over three late-race restarts with the youngster Rowe notching the runner-up finish. Knowles, who is only running a partial campaign this season, settled for third. He was followed by #17 Ryan Hayes, of Jefferson, and #8 Craig Dunn, of Strong.

Wiscasset Speedway returns to action Saturday, June 24 at 6 p.m. with Group 2. The Norm’s Used Cars Strictly Streets will have the spotlight race with a 35-lapper, plus there will be Wood Pellet Warehouse Late Model Sportsman, Kennebec Equipment Rental Outlaw Minis, and Midcoast Region Napa Modifieds. The weekly Flex race will feature the return of the Amsoil Nelcar Legends. Pit gates will open at 2 p.m. Grandstand gates will open at 4 p.m. The green flag will fly on the racing action at 6 p.m. Kids are encouraged to get to the track early as the C&D Laundry Kids Club will put on the First Federal Savings Bank Penny Pounce at 5:30 p.m. For more information, go to wiscassetspeedway.com.