Brent Benner with a nearly finished hull he is building. (Paula Roberts photo) 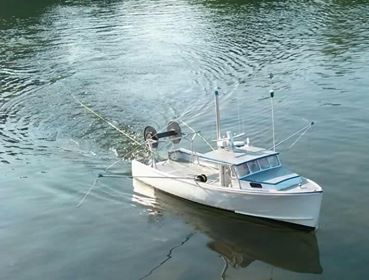 “I found a few guys that were interested,” Benner said. The first annual race drew 30 boats, owned by five different people. A sizable and energetic crowd watched the races held in New Harbor. Racers came from as far away as Canada and New York. “I did not have enough time to get it really organized this year,” Benner said.

He named the boat race after Jerry Farrin, the longtime organizer of the Merritt Brackett Lobster Boat Races. “He liked things really fast, so I thought that it would be perfect,” Benner said. Jerry’s son Gary Farrin and his grandson Zachary Farrin worked the radar gun for the speed races.

A 2004 graduate of Lincoln Academy, Benner has always had a passion for lobster boats and radio-controlled vehicles and boats. He is a sternman for Jeremy Westhaver out of South Bristol. His love for boats and adventure led him to his hobby of building model fiberglass boat hulls.

He looked online to find model boat hulls but could only find a few places that made them. He wanted a bigger hull than was available, so started making his own in February of this year.

Working at Farrin’s “definitely influenced me. Mine look a lot like them. I make them basically like the real thing. It is the same process,” only on a much smaller scale, Benner said. His finished boats weigh between 6-10 pounds.

“I always thought I would make the hulls for myself. I didn’t think anyone else would want one. I went on an internet site and found a lot of interest. There are only two lobster boat kits and one hull that are easy to get,” Benner said.

He made two molds and now makes 31- and 36-inch hulls. He gel-coats the mold, lets it set up for about eight hours, then lays lightweight fiberglass inside. The finished outside hull is white and smooth as glass.

Currently he makes only fiberglass hulls, but may branch out and make molded tops in the future if there is a demand for it. He likes to customize the tops of his own boats, so they all look a little bit different. He even made a model boat of a trawler and a cruiser.

Once someone purchases a bare hull, they need to finish the top and deck and install the radio control equipment.

He makes both static (sits on top of a mantle) and radio-controlled hulls. Benner will finish off the top of a boat, install the deck, or install radio-controlled equipment if a customer requests it. “I’m flexible, but it’s a lot more money,” Benner said.

Benner tests out and drives his model boats on the ice pond in South Bristol. The Jerry Farrin Model Lobster Boat Races was the first time he had raced them. He outfitted one of his boats for the races with a GoPro camera that he borrowed from a cousin. “I’m definitely going to have to buy one,” Benner said of the camera.

“I’m having a lot of fun. I make the hulls to pay for my hobby,” Benner said.

Benner has one friend who is pretty active with the radio-controlled boats, “but no one else local does it. I would like to change that with this race. I think it will be huge next year,” Benner said.

Jerry Farrin Model Lobster Boat Race results
The range of radio-controlled boats is 300 to 400 feet. During the heats, model boats raced out 100 feet, turned around a buoy in New Harbor, then returned to the finish line. When calculating the fastest speed, a radar gun was used and boats had 200 feet to get up to speed. Benner’s boat was the fastest at 26 mph. When not competing, Benner has had one of his boats reach speeds of 30 mph over a 300-foot distance.

The results of the first annual Jerry Farrin Model Lobster Boat Races are as follows:

All Brushed Motors: 1. Bill Dunn with Half Fast out of New York

30″ and under Brushless: 1. Erroll Rafuse with Speculation out of Prince Edward Island.

The best of show, voted on by the crowd, was won by Bill Dunn with Claws.

Keith Reilly, of New Harbor, won the 31″ model hull that was raffled off.