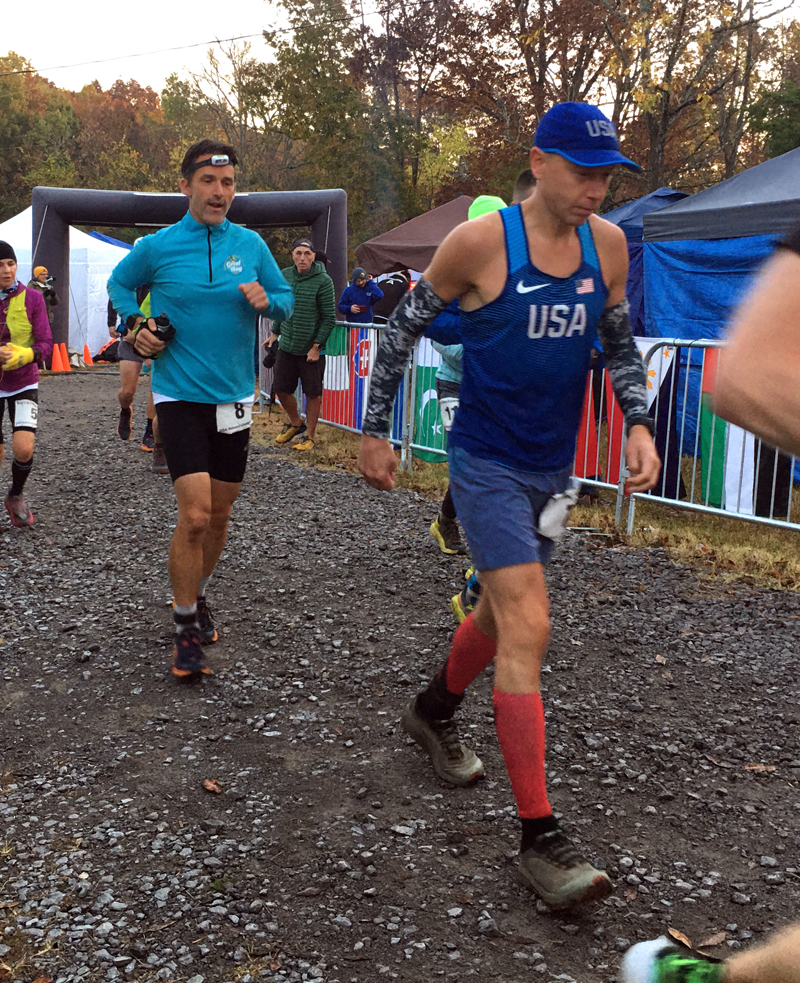 Each national team consisted of 15 runners. There were 38 countries worldwide that competed in the world championships, at the same time, in their own country. The race started at 7 a.m. Central Daylight Time on Saturday, Oct. 15, so all teams were competing in real time.

Belgium, the reigning world champion, is in second place with 776 laps, and Australia in third with 744. Belgium is the only country to still have runners on its course as of Wednesday morning.

With all the countries finished, except Belgium, Bigonia does not think they can catch the USA team. He said the runners would have to run another 100-plus loops to have a chance at catching the USA team, which he expects will be crowned world champions.

“I’ve put in a ton of effort into qualifying for this race and now training for it,” Bigonia said.

He has logged 2,300 miles this year, and competed in three ultramarathons to prepare for the world championship. He has run 15 ultramarathons and 10 backyard ultras in his lifetime, including running the Last Man Standing at Pinelands seven times, winning three of them.

He does not know if he will compete again on the national or world stage, but added he is definitely going back to the Last Man Standing, a race that he loves.

At the Big Dog’s Backyard Ultra World Championship, Bigonia ran 54 loops, for 225 miles. He was one of 13 U.S. teammates to run over 200 miles. The distance was his second-longest ever.

The country that completes the most cumulative yards wins the world championship. Each country will also crowns their own national champion.

Each runner has one hour to finish a 4.1666667-mile loop. If they are unable to accomplish this, they are out of the competition. A new loop (yard) starts every hour on the hour.

Bigonia was ready to quit after his 53rd loop, but his wife Erica Qualey edged him on. He finished his previous four loops in over 58 minutes, so he did not have time to rest between loops, and had to run for four straight hours. He ran up the hills that he had walked earlier in the race in order to make the one hour cutoff.

“It was not fun, but I made it. My last loop counted toward the team score. I got one more point for the U.S. team,” Bigonia said.

Bigonia’s quadriceps were cramping up and he had two blisters on his right big toe and pinky toe. He had only 19 seconds to spare on his 54th lap, so called it quits.

“My feet were mashed,” he said.

Although he felt more limber than at any other ultra race he has run, Bigonia said he is “still running around like a 70-year-old, but it is better than usual.”

Bigonia qualified for the Big Dog’s Backyard Ultra World Championship at the 2022 Capital Backyard Ultra last spring, by running the ninth furthest distance in the U.S. He ran his best ultra at the competition, completing 57 yards (237.5 miles).

Bigonia said the team competition was “very different” from the individual competition he ran in Tennessee last year.

“It was interesting. America was in fourth place at one point, so I was pretty motivated to stay on course,” Bigonia said.

Bigonia was joined by his support staff, including his wife and John Eddyblouin.

Slaby ran the second farthest for the Team USA at the world championships, completing 72 yards for 300 miles. He came four loops shy of winning the U.S. national championship. Biocr Chadovich, from Seattle, Wash., took first for the U.S. with 76 yards. The 300 miles was a personal best for Slaby.

Slaby said the world championship was one of the hardest races he had ever run. He qualified for the race in 2021 at the Capital Backyard Ultra, as an at-large runner. Both he and Bigonia qualified a year apart and both ran 237 miles to make the U.S. team.

Slaby finished his run on Oct. 18.

“I am in pain. My whole body is swollen, my ankles, and my face,” Slaby said. “It will take a few weeks to recover.”

After finishing the night run on pavement, Slaby changed his shoes and could hardly walk.

“I think my core body temperature had dropped. I tried some different things to get going, but just could not do it,” Slaby said. “My average loop the day before was 56 minutes. I knew I was going to be slower. There were two reasons (I stopped running). My body just stopped on me and I was not going to make the cut off.”

“It was definitely one of the hardest ones I have done,” Slaby said. “My  body feels the worst it ever has.”

Since then, he has run close to 50 ultramarathons, which are races longer than a marathon. Typically they are 50K (31 miles) or longer. He has won “three or four” of them.  He has also competed in three Last Man Standing races.

Although his body is saying it never wants to run ultra distances again, Slaby said he will do more races.

“It was worthwhile. It is a fun event that tests your abilities and strengths to keep pushing through it,” Slaby said.