Boothbay boys basketball team defeated Mt.Abram 59-54 in a South Class C quarter-final match-up on Feb. 17 at the Augusta Civic Center. The two teams were no strangers heading into the game, with the Seahawks capturing a three point win over the Roadrunners five games into their MVC season.

Boothbay took a 12 point lead in the first quarter, led by six points each from Ben Pearce and Hunter Crocker. Hunter Warren hit a foul shot for Mt.Abram to cut the lead to 11, 18-7 at the end of one. The Seahawks dominated the boards in first quarter action, 11-5, but the Roadrunners turned the tide in the second frame for a 10-5 advantage. Mt.Abram out scored Boothbay 23-13 in the second frame. The Roadrunners led briefly with 31 seconds to go, before Pearce settled two at the charity stripe to put Boothbay up 31-30 at the half.

Mt.Abram briefly tied the game, before Boothbay, lit it up from downtown on three 3-pointers from Crocker (2) and Sullivan Rice. Mt.Abram netted the final two baskets of the period to pull within one 41-40 at the end of three.

The Seahawks opened the final period with three straight hoops from Nick Morley (plus a foul shot), Crocker and Kaleb Ames to build an eight point lead. The Roadrunners rallied to pull within one on a Adam Luce basket with 23 seconds to go. Mt.Abram fouled Pearce and sent him to the line,  where he sank four of six shots in the final 18 seconds to secure the win. 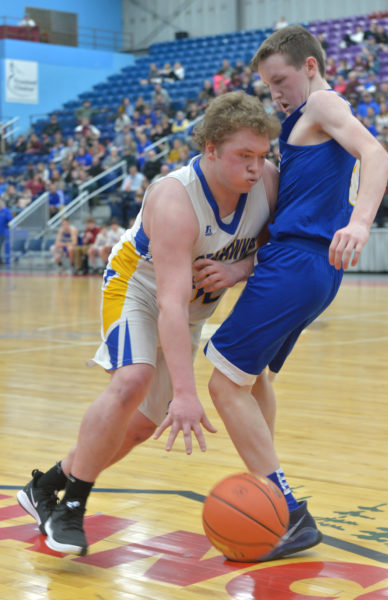