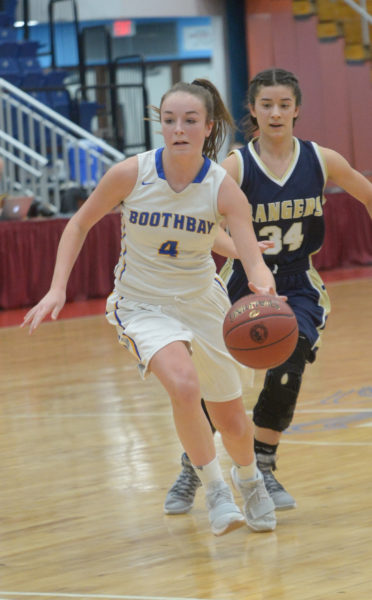 Sydney Meader brings the ball up the court for the Lady Seahawks. (Paula Roberts photo)

After a jittery start by both teams, the Rangers got on the boards with 4:45 to play in the first quarter. Boothbay took the lead for good 21 seconds later on a Sydney Meader 3-pointer. The Lady Seahawks rattled off 11 straight points to start an 18-2 run and close out the first period with an 18-4 lead.

Boothbay’s stifling defense forced 19 first half turnovers and the Seahawks reaped the benefit to lead 36-12 at the half, then coasted in the second half to victory. They take on fourth seed Madison (who they beat 62-43 during their MVC season) in the South C semi-finals on Thur., Feb. 22 at 4 p.m.