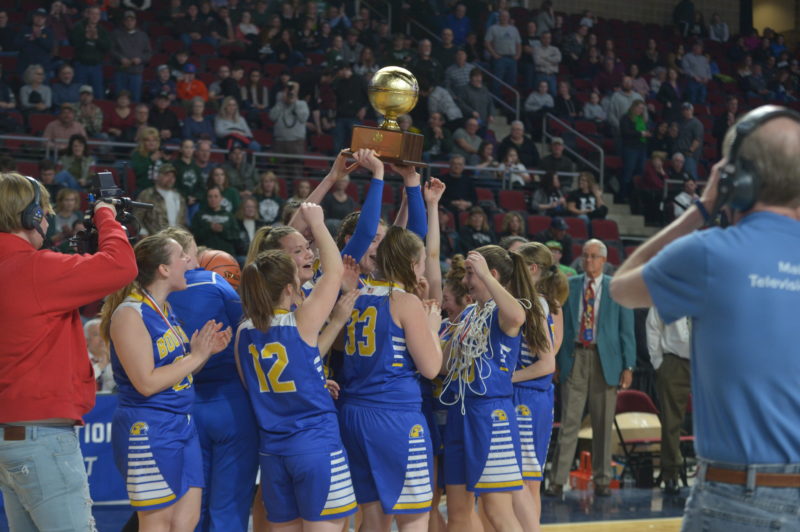 The last time Boothbay girls won a gold ball was 35 years ago in 1984. Three girls on the 2019 championship team are the daughters of two members of the 1984 team. Leslie (Carter) Blethen, mother of Faith and Glory Blethen; and Lauren (Webster) Brown, mother of Kylie Brown, played in 1984.

Boothbay got off to a slow start in the championship game. Emily St. Cyr opened scoring for Penobscot Valley. Faith Blethen crashed the glass for two and Glory Blethen scored on a pass from her sister to give the Lady Seahawks the lead.

The Howlers buckled down on defense and did not give up a basket from the floor for the rest of the period. They scored 11 straight points, led by three hoops from Alexis Ireland, to take a 13-4 lead. Faith Blethen closed out the half with a foul shot to make it 13-5 at the break.

Chloe Arsenault scored on a feed from Faith Blethen and Glory Blethen on a pass from Josey Smith to cut the lead to four. Ireland scored to boost the Howlers’ lead to six. That would be their only basket of the quarter, as Arsenault, “The Wall,” shut down Ireland defensively. Arsenault scored the final hoop of the half to make it a four-point game, 15-11, in favor of Penobscot Valley.

Ireland boosted the Howlers’ lead to six before Boothbay got its offense rolling in the the third period. The Blethen sisters scored back-to-back hoops. Glory Blethen settled one at the foul line and Ashley Abbott two to give Boothbay a one-point lead with 2:52 to play. Kylie Brown scored to put Boothbay up by three. Ireland cut the lead to one, but that was as close as PVHS would get. Arsenault bumped the lead back up to three. Ireland made a foul shot, then Faith Blethen made two. Ireland hit a buzzer-beater to make it a two-point game, 24-22, at the end of three.

Brown scored off a Glory Blethen pass to open the final period and Arsenault crashed the glass for two to put Boothbay up by six. The Cross Insurance Center roared to life as Boothbay Region fans came out of their seats in anticipation of a state title.

Boothbay spread the floor and forced the Howlers to foul. Glory Blethen made good on three of four foul shots down the stretch to seal the win.

Every Boothbay Region warmup jersey is engraved with one word – commitment.

“We have been wearing those warmups all season. It definitely embodies what it takes to be successful as a team: commitment to each other and commitment to a collective team success,” coach Brian Blethen said.

Of Chloe Arsenault’s defensive efforts on Ireland, coach Blethen had one word: “fantastic.” Arseanult’s nickname is “The Wall.”

“She has been the defensive go-to all year,” coach Blethen said. “She works hard and is very disciplined. We made some adjustments in the second quarter and put Chloe on Alexis Ireland, and that was a real key to our win.”

“We give credit to Penobscot Valley. They played tough defense. They are a gritty, hardworking team. They put pressure on us early that put us out of our rhythm. We made a couple of adjustments on the floor. I am very proud of how our girls kept their composure,” coach Blethen said.

Although Boothbay had a relatively easy regular season in the Mt. Valley Conference, going 18-0, the team scheduled tougher competition in the preseason and during the Christmas break. “That gave us just enough experience and confidence. It proved to be successful,” coach Blethen said.

Besides the defensive adjustment of putting Arsenault on Ireland, Boothbay moved 6-foot, 1-inch senior forward Faith Blethen to the top of the key on offense. That move got the offensive ball rolling for the Lady Seahawks, as she drew the defense out, which opened up the inside for her teammates.

“She can handle the ball, shoot from the perimeter, and post up. She can fill whatever role we need. She is not only a rebounder, but a team player. She does what the team needs her to do as a leader. She has a real appreciation for her teammates,” coach Blethen said of his daughter, Faith Blethen.

Every member of the Boothbay squad is valued, regardless of their ability on the floor.

“We value their commitment, even though they do not see a lot of playing time,” coach Blethen said of his Lady Seahawks, including two seniors, Maddy Barter and Alexis Davison, who “have been with the program for many years.”

Coach Blethen said that when Boothbay tied the game in the third period, the team “could feel the momentum shift.”

Of his daughters, Faith and Glory, joining their mother as members of a state championship team, coach Blethen said, “We have always acknowledged and the fed the passion to secure this goal. It is a happy moment for my family, for my wife and daughters to share the experience and also for Kylie (Brown) and her mother. It was a lot of fun.”

“We appreciate the community’s support. We are very thankful to have such a supportive community and school system,” coach Blethen added.