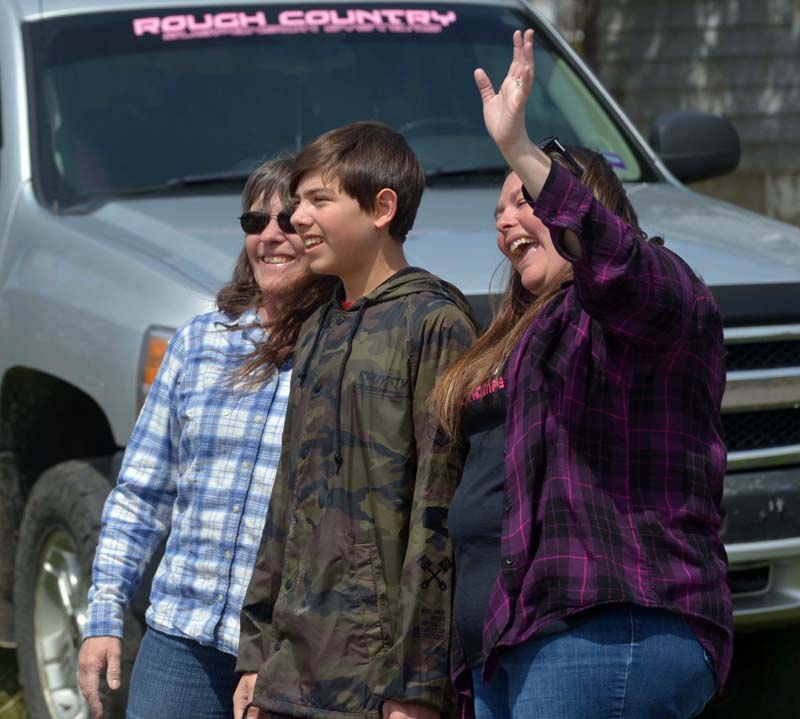 D.J. Thompson is all smiles on his 13th birthday as a parade of nearly 70 vehicles goes by his house in Jefferson to help him celebrate. He is flanked by his grandmother, Sarah Moran, left, and his mother, Laura Thompson. (Paula Roberts photo)

D.J. Thompson, of Jefferson, was turning 13 on Friday, April 24, and his mother, Laura, wanted to do something special to help him celebrate in the wake of the COVID-19 outbreak. His father, Dave, had passed away March 18 from complications from two strokes, so his mother knew this would be a particularly hard time for her son.

She reached out to friends on Facebook and asked for help from the community in the way of a drive-by birthday parade. Wiscasset Speedway’s track announcer and promoter, Ken Minott, saw her post and reached out to Dave’s extended track family.

The parade was not only a surprise birthday celebration for D.J., but for Laura as well, with nearly 70 vehicles parading by, including race cars, antique autos, and decorated cars. The parade was led by a Lincoln County Sheriff’s Office truck with lights and sirens going, followed by the Wiscasset Speedway pace car and pace truck.

“It was bigger than some Memorial Day parades. I was floored,” Laura Thompson said. “My husband was very involved with the racetrack. There were a lot of his school friends and people from the Jefferson community.

“I expected 35-40. I knew that people put the word out, but I did not know who was coming. That was a big surprise. We did not know about the police escort either.”

Many vehicles were decorated for D.J.’s special day. Some shot Silly String, water balloons, and brightly colored, sparkling confetti; his sister Kammie tossed him candy. Kids waved out of windows and sunroofs, and the beds of some trucks were loaded with well-wishers. Trucks towed trailers with race cars as a special birthday tribute to D.J., who, like his father, is well liked at Wiscasset Speedway.

Laura received another surprise when race fan Jeff Read stopped his car, got out, and presented her with a Christmas present in the form of an ornamental metal owl. Dave Thompson had ordered the owl, but it had not been completed in time for Christmas.

“We are beyond grateful for the support of the surrounding community. I could not ask for a better 13th birthday for my son, with everything we’ve been going through,” Laura Thompson said. “The support has been unreal.”

She expressed appreciation for “so many wonderful people” coming forward to help. “It is just remarkable. I am just so floored. It makes me feel so good inside,” she said.

After isolating for weeks, D.J. said his favorite part was “seeing all the people.”

“I’m a big race fan,” D.J. said. The 2020 season will mark his seventh at Wiscasset Speedway. “I hope to drive someday. I was supposed to test one out this year.”

D.J. has worked on pit crews for several drivers. “They call me the pit jumper at Wiscasset Speedway. You never know what pit crew I will be on,” he said.

“He is a pretty huge race fan – one of the biggest ones out there. He used to work on cars with Dad,” Kammie said.

D.J. loved that Derek Chapman did a burnout for him during the parade.

“That was cool. Ricky Sproul did a burnout for me after the parade. That was pretty cool. I liked seeing all the race cars. That was cool too,” D.J. said.

Many occupants of vehicles dropped off gifts and cards to make D.J.’s 13th birthday extra special.

D.J. helped his father work on his No. 24 car, which Dave Thompson drove at Wiscasset Speedway for the past two years.

“You could kid around and pick on him and he would have a grin on his face,” Ken Carey said of Dave Thompson before the parade. “He was just like one of my kids. He is missed by everyone.”

“He was an undescribable, awesome guy. He had a smile on his face all the time. He would do anything to help anyone. He was special,” race fan Stella Carey said of Dave Thompson and why they came out to support D.J. on his birthday.