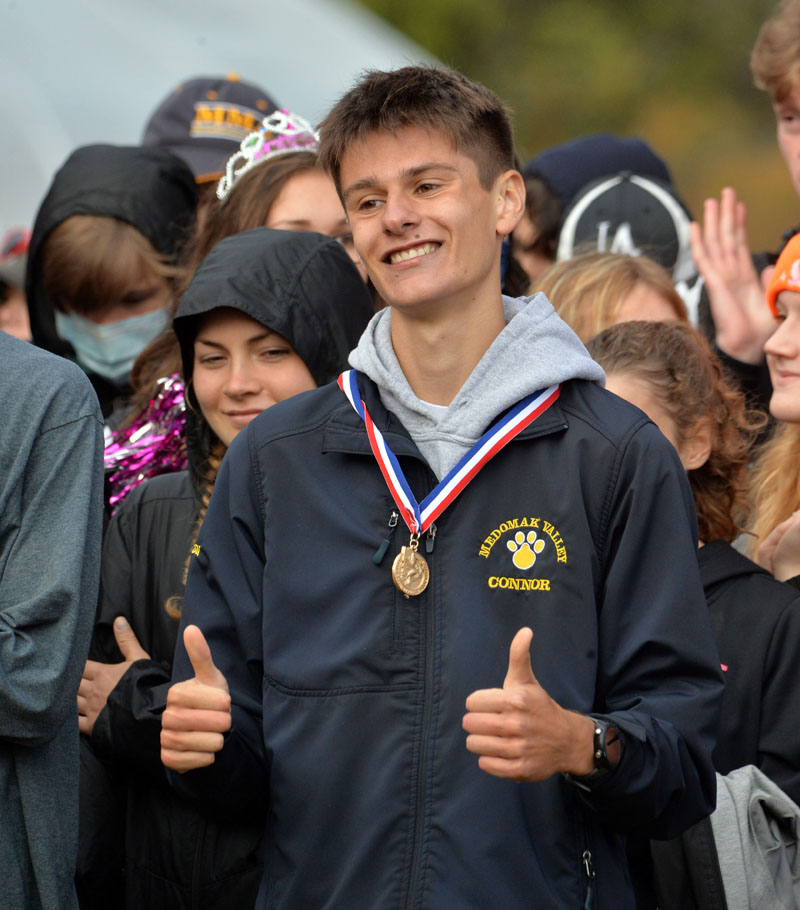 Daigle persevered, despite six falls in the race, as he slipped and slid his way to the second boys cross country state championship win in Medomak Valley’s history.

“I can’t really put into words how awful the course conditions were last weekend. I have heard and experienced way too many horror stories. It was a nightmare,” Daigle said.

Daigle said he felt pushed by Ouellette, after winning the Class B North Regional title with no one in sight. Daigle also won the Kennebec Valley Athletic Conference Class B championship and was named KVAC Class B Runner of the Year.

For most of his career at Medomak Valley, the Panthers did not have enough runners to score as a team. As Daigle crossed the finish line at states, he held out his jersey to proudly show off his school’s name.

He hopes his win will re-vitalize the boys cross country program at Medomak Valley by inspiring young runners to come out for the sport he has grown to love.

“Connor has worked extremely hard to reach this point in his running career. The only person responsible for Connor’s success is Connor himself. So many things can go wrong in a race at this level of competition. You never are sure until a runner crosses the finish line,” Coach George Gould said of Daigle’s state championship run.

“I got to see Connor at four spots on the trail, it was so hard to jog, let alone run. Connor ran an extremely smart race, run for the win by sacrificing a personal best time,” Gould said of the extremely muddy conditions.

“My goal coming into the race was to run under 15:40. But my plans quickly changed as I underestimated how horrid the course really was. To put things into perspective, I ran 43 seconds slower than I did last weekend (15:52).

“It just was not a fun day. I fell six times, but my teammate Noah Morris fell eight times. This kind of stuff doesn’t really get taken into account when you look at the results.

“I knew it would be a smart idea to shift my focus from running a fast time to just settle for a win after I fell down on two different corners before I even made it past the first mile marker. I wanted to try and just stay as safe as I could so I wouldn’t get injured,” Daigle said.

“I am just grateful I was able to finish the race relatively healthy. I did take a pretty bad fall mid-way through the second mile which still has my left shoulder hurting.”

“After having two girls state champions, it is certainly rewarding to add a boy to the list. I look forward to watching Connor’s future career,” Gould said.

“Bringing home a cross country state title for Medomak is something I have wanted to do for a very long time. Coach (Gould) had told me ever since I was a freshman that I could become his first male state champion and now I’m proud that I won’t be the last.”

While being interviewed after the race, Daigle pointed to his younger brother Colby Daigle, who ran for Medomak Middle School this year, and gave him as an example of the future of the Panther program.

“Winning the state title is cool and all, but for me my biggest win of the season was (not only) the opportunity I got this year to mentor and inspire both my younger teammates Noah Morris and Atticus Blue, but also the middle school cross country teams.

“I take a lot of pride that I am able to represent my school as its first cross country state champion, but I’m even prouder that I know I have left a positive impact on our younger distance runners. Being able to volunteer at most of the middle school cross country meets and occasionally coach our younger distance athletes was probably the most rewarding thing I’ve got from this season,” Daigle said.

Daigle truly believes Medomak will have its first boys state team championship in the coming years, and his younger brother Colby will be a part of it.

Daigle will reveal the college he plans to attend, and to continue his running career on Twitter on Wednesday, Nov. 3.

Panther teammate sophomore Noah Morris placed 53rd in the state championship meet in 19:05. The week before Morris qualified for the states, which Daigle said, “seeing him run his best race ever was the highlight of my day. I know when I am gone the program is in good hands.”

Medomak senior Kassi Soule qualified and competed in the girls race. Soule finished 74th in a time of 24:18.