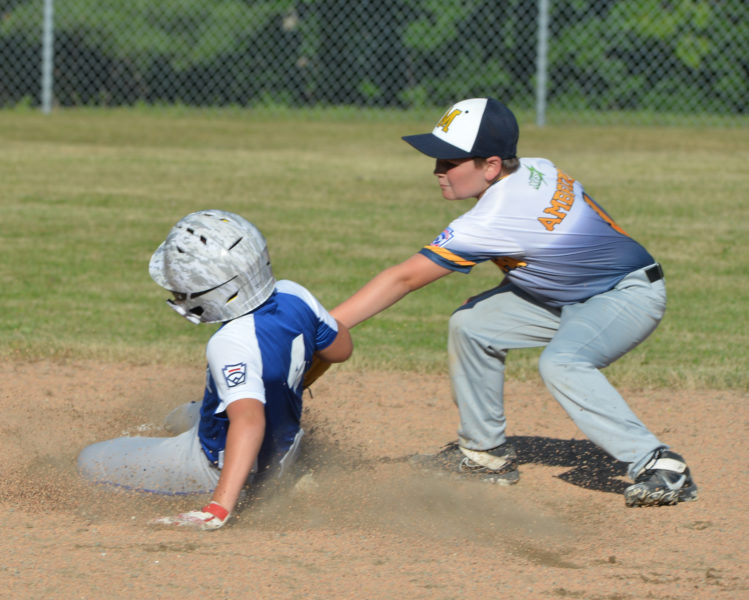 Lincoln all-star Lucas Grady is tagged out by Medomak’s Landyn Ambridge while trying to steal second base. (Paula Roberts photo)

Medomak Valley 11 & 12 Little League softball all-stars defeated Lincoln County 9-4 on July 6 to win the District 2 championships. Medomak advanced to the State Tournament with the win. They lost their first game at States, 13-2 to Acadia. Catcher Grace Townsend threw out three base runners. Paige Gerlack hit a RBI double scoring Elyse Court in the fourth inning. Kiki Ames was hit by a pitch in the third and circled the horn for Medomak’s first run. Townsend also had a hit for Medomak. 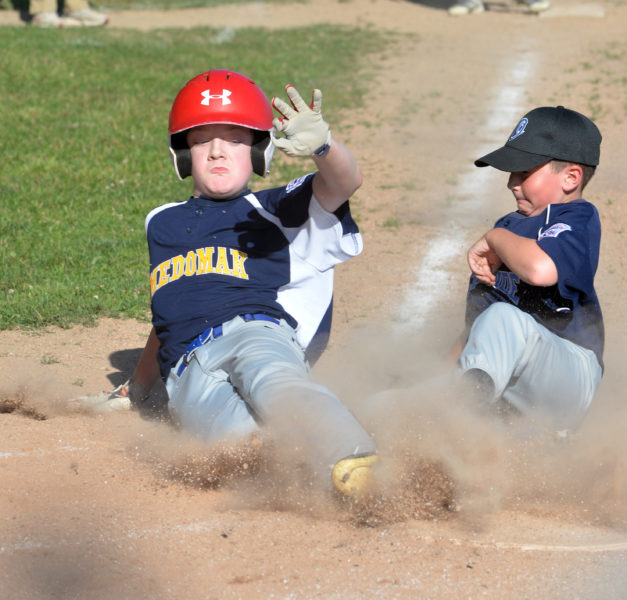 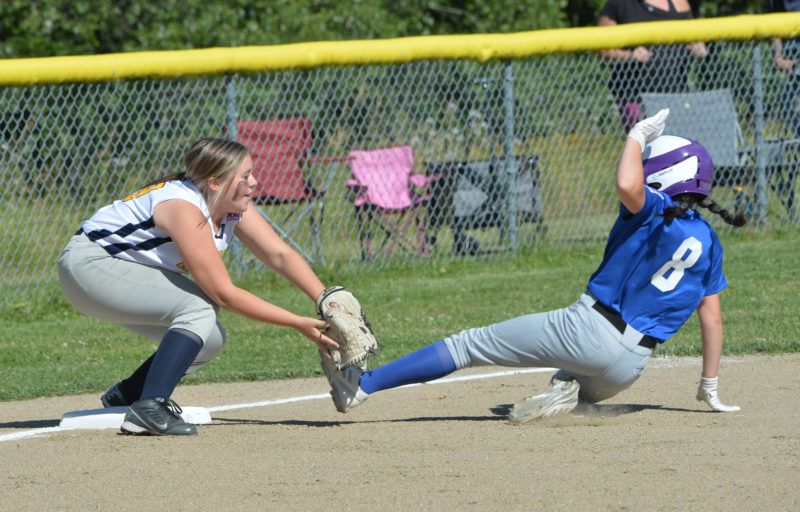 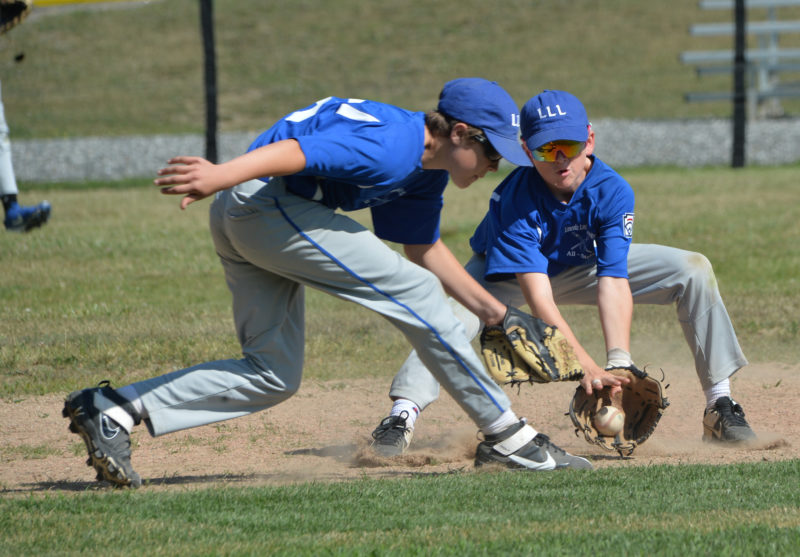 Lincoln Little League defeated Medomak Valley 11-6 on July 7 in the two team’s first game of the District 2 playoffs. On July 9, Medomak lost 24-23 to 5-Town in a nearly three hour marathon game, to be eliminated from the D2 tournament.

Lincoln lost 18-10 to Waldo County on July 9. Quinn collected the win. Hitting for Lincoln were Lucas Grady with three singles, ‘David Osier a double and single, Sterling McKernan two singles, Jason Jones a double, and Michael Pinkham, Sawyer Cheney and Brooks Savage a single each. Hitting for Waldo were Jed with three doubles and a single, Campbell a triple and two singles, Story two doubles and a single,  Quinn a double and two singles, Grainger three singles, and Bubba, Bradford, Jacoby and Colton a single each.

Lincoln Little League 11&12 all-stars defeated 5-Town 6-5 on July 9 at the CLC YMCA in Damariscotta. Sam Wissman started on Lincoln’s mound, and Andreas Eraklis collected the win. Lincoln scored the game winner in the fourth, when Wissman reached on an error, moved over on a Andrew Nichols single and scored on a passed ball. Hitting for Lincoln were Nichols with a double and single, Colin Mitchell a triple, Andreas Eraklis a double, and Kelly Manahan a single. Hitting for 5-Town were Perez with a double, and Campbell, and Lombardo a single each.

Lincoln Little League defeated Waldo 11-3 on July 11, to advance to the District 2 championship game, to be held July 17 at the CLC YMCA field in Damariscotta. Brody Day started, Wesley Poole pitched middle relief, and Colin Mitchell closed out the game.

Lincoln scored nine runs in the fourth inning, highlighted by a two run triple from Poole. Hitting for Lincoln were Poole with a triple, and Indiana Robinson, Day, Mitchell, Jacob Tomasello and Elijah Libby with a single each. Hitting for Waldo were Ivan Ingraham with a double and two singles, Brody Ingraham two singles, and Thatcher Otis a single.