Erskine Academy baseball defeated Lincoln Academy 15-0 by five inning mercy ruling on May 10 in Newcastle. Tristan Anderson collected the win (1H, 0B, 5K). Lincoln had just one hit, a fifth inning single to Lucas Houghton. Erskine was led at the plate by Blair with a triple and single and Rabideau a double and single. Barber drove in three runs and Rabideau three to lead Erskine.

On Sat., May 8, Oceanside defeated LA in nine innings. The score was tied 1-1 heading into the top of the ninth inning, when Oceanside plated three runs. Bowen Brann drew a walk, went to second on a perfectly executed hit and run from Alec Sirois. Lincoln intentionally walked Bartlett to load up the bases with no outs. Oakes-Nelsen laid down a bunt, but the throw to the plate was high, allowing Brann to score. With two outs, Finnegan Lynch reached on an infield error that saw two runs score. 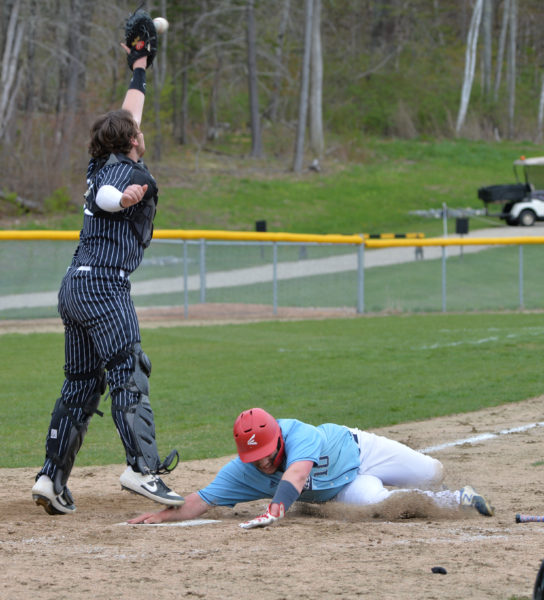 Bowen Brann dives home in the top of the ninth inning for Oceanside as Eagle catcher Nick Prior leaps for a high throw. (Paula Roberts photo)