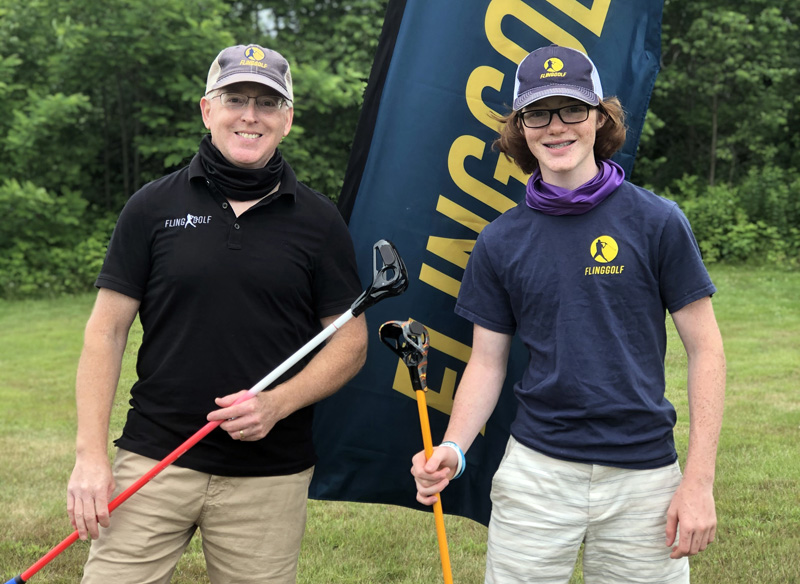 FlingGolf, a sport where almost anything goes, made its debut at Wawenock Golf Club in Walpole in mid-July. The sport, played with a golf ball on a golf course, uses a single club called a FlingStick. The ball is placed in the pocket of the stick and is thrown, tossed, pushed, or putted around the course.

FlingGolf is a brand-new game for a younger generation. It was invented by Alex Van Alen in 2012 in Woburn, Mass. Van Alen, who worked in land conservation and outdoor recreation for most of his career, has made it his mission to make “35,000 golf courses around the world more active and more fun for people,” his website states.

FlingGolf Vice President and General Manager Stevan Bloom and his son, Ari, gave a FlingGolf demonstration and clinic at Wawenock a couple of weeks ago. Two Wawenock employees, Alison York and Quincy Perry, attended the clinic and instantly fell in love with the sport.

Perry played golf and baseball at Lincoln Academy and called the sport a perfect combination of golf and lacrosse.

“I probably will not play baseball anymore. FlingGolf gives you the lacrosse/baseball feel back a little bit. You need more strength to play it than golf,” Perry said.

Perry said FlingGolf is the perfect sport for athletes who want an athletic feel to their activities. He said it is the sport for “people who played baseball or lacrosse, who still want to play, and for people who do not play golf and do not want to spend hundreds of dollars on clubs. It is great for those not into golf.”

The best part of the game is that it is easy to learn. “It is quicker to pick up than golf,” Perry said.

Wawenock rents FlingSticks for $15 to anyone who would like to try the sport. They have three different lengths available. They can be used on the driving range until a player gets used to throwing.

Perry said the longer the stick, the further one can throw.

The beauty of the sport is, players only need one stick to perform the drive (throw), chip, and putt. A foursome can share one stick and not have to carry a bag of clubs around.

“As long as you can throw a consistent shot, it is a lot easier than golf,” Perry said.

York said she had tried golf before but was not very good at it. York, a Lincoln Academy graduate, played softball and lacrosse. “I am better at throwing things,” she said.

Her initial reaction to FlingGolf was frustration, as she struggled throwing the golf ball with a lacrosse throw. She switched to launching the ball with a baseball swing and “literally picked it up in three minutes,” she said. “It took the family (participating in the clinic) no time at all.”

Once you learn the game, Bloom said, it only takes 45 minutes to complete nine holes. “It is so much quicker,” Perry said.

“The thing with this is, in golf there is only a certain way you can use a club, but with this there are so many different ways you can drive, chip, and putt,” Perry said.

Chipping can be done overhand, underhand, or sidearm. “Putting is a little more difficult than using a golf putter,” Perry said.

Although the FlingGolf website says the sport can be played alongside traditional golfers, Perry said it would be tough to play with mixed parties because a golfer can drive the ball 300 yards, where in FlingGolf the average throw is 100-125 yards, although really good players can throw closer to 250 yards. After just two weeks of practice, Perry can throw 150 yards.

Scoring in FlingGolf is the same as golf. The fewer the shots, the better the score. There is a one-shot penalty for going out of bounds, losing a  ball, or going into a water hazard or sand bunker.

While teeing off, a FlingGolfer can get a running start up to the tee marker and launch the ball. On the fairway, players can retreat five paces back from where their ball stopped and run up to the spot before throwing.

On the green, the ball can be putted with the flat side of the  FlingStick, pushed like a pool ball, pulled toward the hole, or tossed.