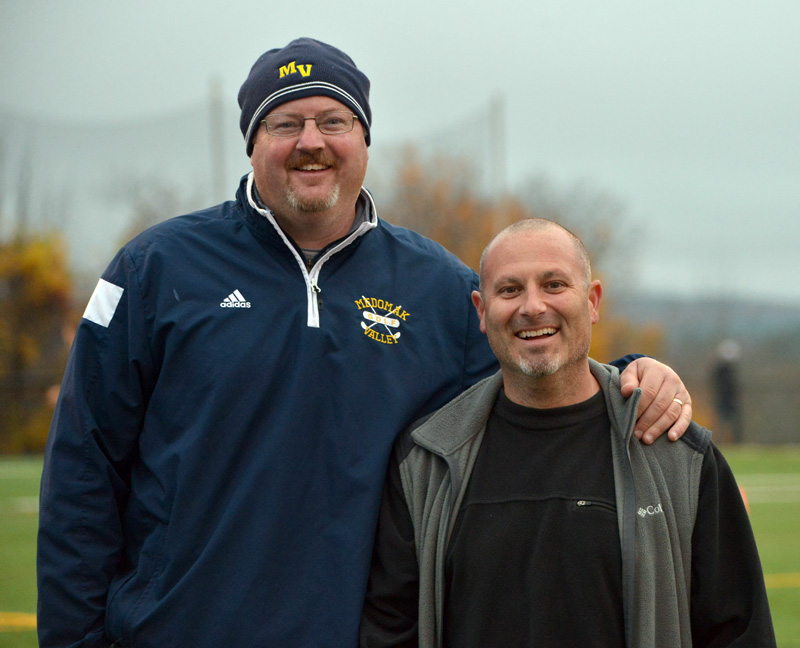 Although rivals in the playing arena, athletic directors Matt Lash (left), of Medomak Valley High School in Waldoboro, and K.J. Anastasio, of Lincoln Academy in Newcastle, are generous in sharing their facilities with each other for the betterment of both schools. (Paula Roberts photo)

On the playing surface, Medomak Valley and Lincoln Academy are fierce rivals, but when the chips are down, athletic directors from both schools have extended the olive branch and come to each other’s aid time and time again.

Medomak could have said no, but in the spirit of sportsmanship, Lash agreed to let Lincoln use the MVHS facility.

“They have been very accommodating,” Anastasio said.

When construction was underway on Lincoln Academy’s new baseball field, it was the town of Waldoboro that came to LA’s aid, by allowing the Eagles to practice and play on the town’s Babe Ruth field.

Lincoln baseball has played home playoff games on Medomak Valley’s field when Lincoln’s field has been too wet. Lash has been known to dig a hole in his infield and set up a sump pump to dry out the field.

Late last October, after a night of snow, Medomak Valley contacted Anastasio to see if Medomak girls soccer could play a North B playoff game on the Eagles’ turf field. Anastasio quickly said yes, and the two athletic directors and a four-man crew started shoveling off the field. When they were half done, they turned around and Mother Nature had cleared the rest of the field. The two athletic diretors still joke and share a laugh about it.

Last week, after several inches of rain had fallen in the Midcoast, Lincoln Academy once again came to Medomak’s aid. Lincoln hosted the Lady Panthers’ preliminary game against Leavitt on Oct. 26. On Oct. 30, the Eagle field was once again the Panthers’ home field for the boys soccer quarterfinal match with York.

Not only did Lincoln let Medomak use the field for games, it let Medomak practice in the Eagles’ nest as well. Anastasio, a former LA boys soccer coach, knows full well the importance of practice leading up to a big game. “It sets you back so much when you cannot practice,” he said.

“It truly is our pleasure to help them, as well as other teams. I know they would do the same thing for us anytime,” Anastasio said of Medomak Valley. Lincoln Academy also hosted Richmond and Camden Hills home playoff games last week.

“Our district and school are grateful to K.J. and LA for allowing us the opportunity to use their beautiful soccer facility for recent postseason games and practices. They graciously helped us last year as well. I am not sure where we would be without their cooperation,” Lash said.

“I have tremendous respect for K.J., his professionalism and friendship. Sometimes the profession of athletic administration can be difficult, but when you have people like K.J. to work with, it sure makes it much easier,” Lash said. “We all know the rivalry between the two schools, so if the two at the top can work together in situations like this and beyond, the hope is that all can.”

“We are glad to be able to continue the relationship of them using our track next spring, and our baseball field is always available to them when needed,” Lash added. “We will continue to do whatever we can to provide the best experience possible when they call upon us. I know K.J. feels the same way. It’s for the kids.”