Camden Hills boys basketball team defeated Medomak 50-41 for the Kno-Wal-Lin Tournament championship on March 11 in the Panthers den. The Windjammers netted the first 12 points of the ball game led by three 3-pointers from Jeremy Fraser. Medomak stayed within striking distance all game, but Camden led 12-5 at the quarter break, 30-25 at the half and 36-31 at the end of three.

Weston DeWaard gave Camden a seven point lead early in the fourth quarter. Back to back hoops from Trevor Brown cut the lead to three, but that would be as close as the Panthers would get. Camden went eight for eight from the charity stripe in the final 56 seconds to play to win by nine. Frasher went 6 for 6 and Messer 2 for 2 to seal the win. 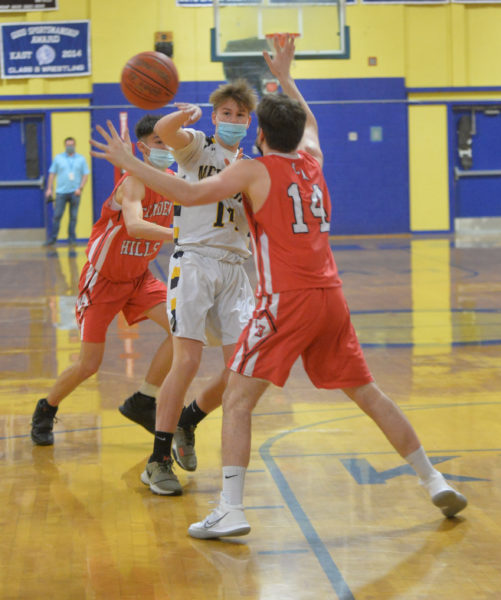 Garret Hutchins gets the pass off as Casey Messer defends for Camden. (Paula Roberts photo)