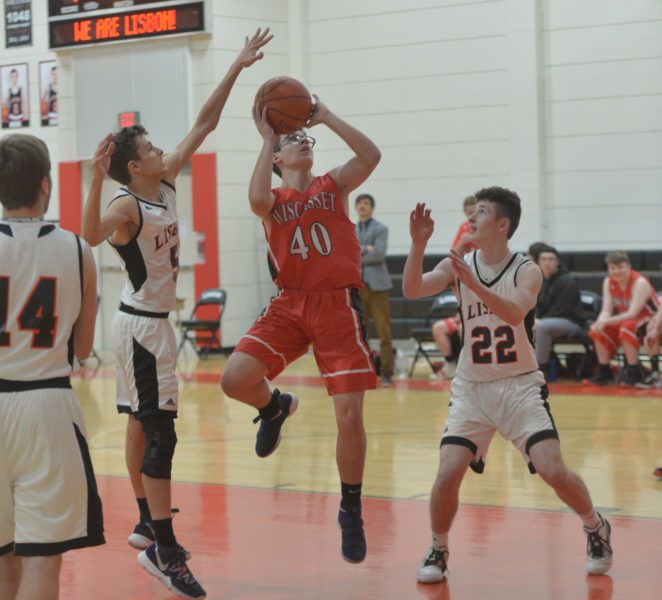 Johnny Spies takes a shot for the Wolverines. 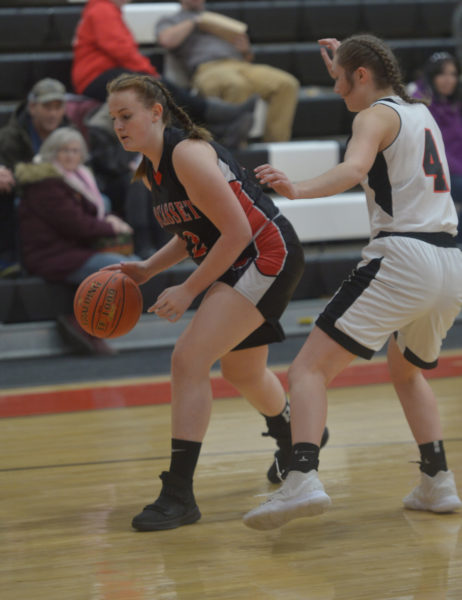 Madison Carrier dribbles toward the hoop in Lady Wolverine hoop action at Lisbon. on Dec. 20.

Medomak Valley boys basketball team defeated Lawrence 49-34 in the Panthers den on Dec. 20 in a defensive battle. Parker Morrison and Jake Bickmore held Lawrence’s two top players Dylan Hachey and Dylan Coombs to a combined seven points. The Panthers were led by Morrison with 16, Trevor Brown 13 and Patrick McKenney 9. Lawrence was led by Blaisdell with 13.

Medomak Valley girls basketball team stole a 54-51 win on the road at Lawrence on Dec. 20. The Lady Panthers rallied from behind in the fourth quarter, scoring 22 points in the frame to pull out the three point win. Medomak was led by Kayla Donlin with 13 points, Sadie Cohen 12 and Autumn Ripley 10. Lawrence was led by Poli with 14 and Curtis 13.

Oceanside girls basketball team robbed the Eagles nest for a 58-36 win on Dec. 20. The Mariners were led by Grace Woodman with 18 points, Audrey Mackie 12 and  Anna Kingsbury and Molly Gould with 9 each. Lincoln was led by Maddy York with 10 and Payson Kaler 8.

Oceanside boys basketball team out scored the Eagles 26-6 in the third quarter to pull out a 69-52 win in Rockland on Dec. 20. Oceanside led 9-8 at the quarter, and Lincoln Academy 29-26 at the half. Oceanside was led by Cameron Kingsbury with 25 points (14 in the third quarter), and Everett Allyn 8. The Eagles were led by Joe Giberson 11 and Jayden Dolloff 10.

Lisbon girls basketball team beat the Wolverines of Wiscasset 54-24 on Dec. 20 in Lisbon. The Greyhounds were led by Charlee Cox with 14 and Kiley Merritt and Giano Rusoo with 12 each. Wiscasset was led by Bri Colson-Orr with 6, Kateleen Trask 5 and Emily Richardson and Latisha Wright with 4 each.

Lisbon boys defended their home court for a 90-14 win over Wiscasset on Dec. 20.  The Greyhounds were led by DJ Douglass with 20, Ring Ring 11, Seth Leeman 10 and Corey Weirs and Hunter Travis 9 each. Wiscasset was led by Noah Haggett 7 and Matt Eckert 5.