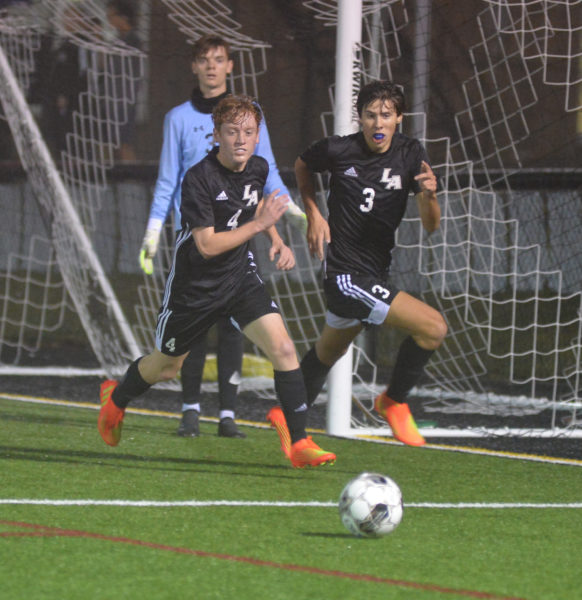 Mica Houghton and Isaac Thompson pursue the ball after making a defensive stop for the Eagles. (Paula Roberts photo) 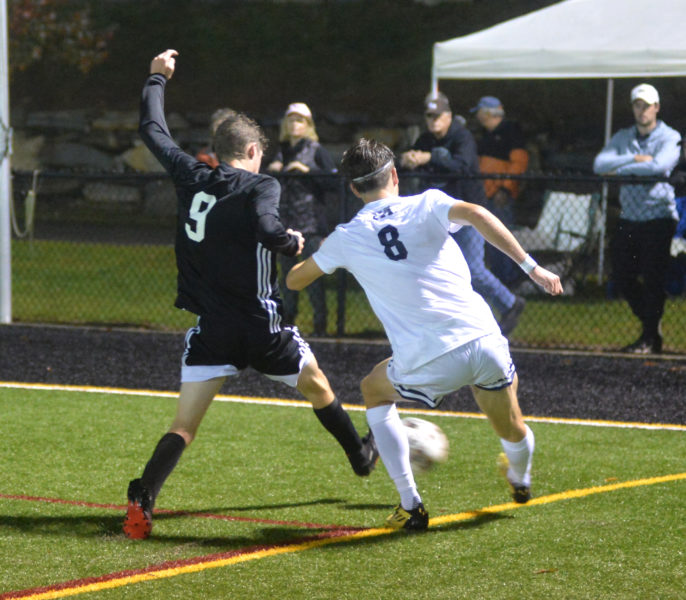 Seventh seed Fryeburg Academy (9-5) upset second ranked Lincoln Academy 2-1 in double overtime in a South Class B boys soccer semi-final match-up on October 26 in the Eagles nest. After a scoreless first half, the Eagles took the lead nine minutes into the second half on a long direct kick from Cody Cleaveland. Pablo Duran beat Fryeburg keeper Aidan Clement to the ball to head it home for a 1-0 LA lead.

Fryeburg knotted the score five and a half minutes before the half on a shot from Jacob Adams. Both teams had ample opportunity to score the game winner in regulation, but Cleaveland and Clement stood firm on their endlines.

Lincoln held a 6-2 advantage in shots in the first 15 minute overtime period. Cleaveland made a diving save in the Eagles defensive end. Fryeburg’s Geri Daui prevented an Eagle goal when he headed out a shot with Clement out of the net.

Both teams saw players leave the game with leg cramps, as both teams left it all on the field. The second overtime period saw Jack Duncan ring the cross bar a minute and a half into. A shot from Connor Cass was stopped by Clement and Nick Archer missed wide.  Cleaveland stopped a shot from Rafael Ajimura, before Matteo Sbuell scored the game winner on a textbook cross from Michael Kratz with five mintues left in the second OT.