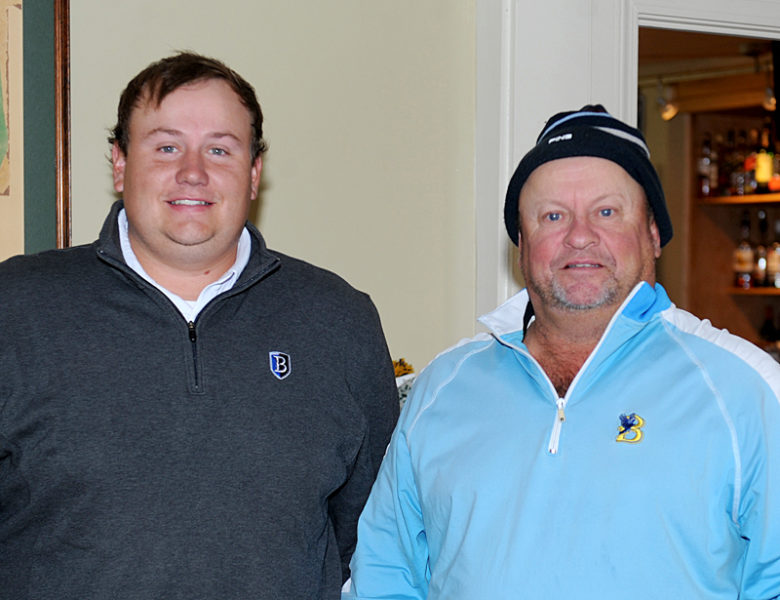 A few weeks after graduating from Bentley University, Malcolm Oliver turned pro, just like his father Leon before him. Leon turned pro at 21 and Malcolm at 22. Now father and son work side by side at Bath Golf Course as pro and assistant pro. Malcolm will be heading south this week to work as a caddy in Florida over the winter and continue to pursue his pro golf career.

Like father, like son, both got their start playing golf at a young age. Leon started playing at age 9 with a Little League buddy and played his first match at Meadow Hill in Farmingdale. He has been playing golf for 44 years.

Malcolm has had a golf club in his hands since he was 2 or 3 years old and tagged along with his father at Wawenock Golf Course in Walpole, where Leon was pro for many years. He won his first junior championship at age 7.

Although both are golf legends of their game, they are opposites in personality. Leon, always charismatic, lightens up every clubhouse he is in and every foursome he plays with. Malcolm, on the other hand, is much more reserved and soft-spoken.

The state golf tournament is run much differently today than in Leon’s day. Leon played in an era that had no class divisions. Leon made it to the finals one year and placed fifth. Malcolm won the 2011 State B championship in stroke play.

Malcolm is one of four state golf champions from Lincoln Academy. 2001 winner Kyle Feltis, and 2013, 2015, and 2016 winner Bailey Plourde are his cousins. Brandon Allen tied for first in 1988 in State Class A.

Malcolm is known in Maine Schoolboy play as one of the most honest golfers, after he hit the wrong ball on a fairway by mistake and then owned up to it. He took a penalty on the play at the state championships his senior year. He went on to win the state title. He received letters and phone calls congratulating him from fellow players and coaches across the state; was recognized by Bob Plourde, president of the Lincoln Academy Alumni Association, at a public event; and was recognized by Gov. Paul LePage.

“That’s the biggest thing I remember of that tournament. Winning is great, but when you have the integrity to call a rule on yourself,” a proud father said of his son. “I had a lot of coaches come up and say most kids would not have done that.”

Leon attended the University of Southern Maine for one year before moving to Florida to attend the PGA’s four-year program to become a pro.

Malcolm took a different route to turn pro. He graduated from Bentley University with a degree in economics and finance.

He is a legend in his own rights at Bentley. While there, he broke many Bentley golf records, including most wins in a season and career, lowest scoring average, career low score average, and most birdies.

“I pretty much have all of them,” Malcolm said of Bentley records. While at Bentley, Malcolm won six tournaments and was crowned New England Collegiate champion his junior and senior years.

Leon has made a name for himself on the Maine golf circuit. Although he only played in a couple of tournaments this season due to a hip injury, he placed fourth in 2015 in Points Chapter Player of the Year. “Three of the top four were in their 50s,” Leon said. He won back-to-back championships in 1999 and 2000.

Of his first year of pro play, Malcolm said, “I did pretty well.” Oliver won an event in Vermont with a 64, took 10th in the Maine Open with a 67-70, and won a Pro-Am at Falmouth a couple of weeks ago with a 68. He played in 18 tournaments over the summer and fall.

“He did better than I thought he would. It is not easy out there,” Leon said. “Especially playing all new courses and playing against the best college players,” Malcolm added.

Of what it is like living up to his father’s legend, Malcom said, “there has never been any pressure to live up to.”

Malcolm said he has no course records yet. His best score so far is a 63. “I haven’t caught the legend, not yet.”

The two have not played a tournament together this summer. Leon said it was “great working with Malcolm this summer. I get to hang out with him. It has been great having him around.”

Malcolm said the best part of working together is spending time together. “If I did not work here, I probably would not see him much” because he is working or playing golf, he said. “I’m not home much. I stay pretty busy.”

“It has been a blast following Malcolm,” Leon said. Leon keeps the live stream of tournaments Malcolm plays in on “speed dial.” He still keeps tabs on Bentley golf.

“You got to see me a few times in person,” Malcolm said of his college play, before the two of them rambled off the tournaments Leon watched in unison.

“It has been great to see his game grow since he was a little kid playing with his cousins and relatives at Wawencok, and pushing the cart that was bigger than him,” Leon said.

“I am looking forward to see what comes about at the next level. He seems to have adjusted at every level so far,” Leon added.

The bachelor Malcolm said he is hoping to have children in the future and looks forward to teaching them the game of golf someday, just like his father did for him.

“I hope it is in the next 10 years so I can at least beat someone in the family,” the always humorous Leon added.