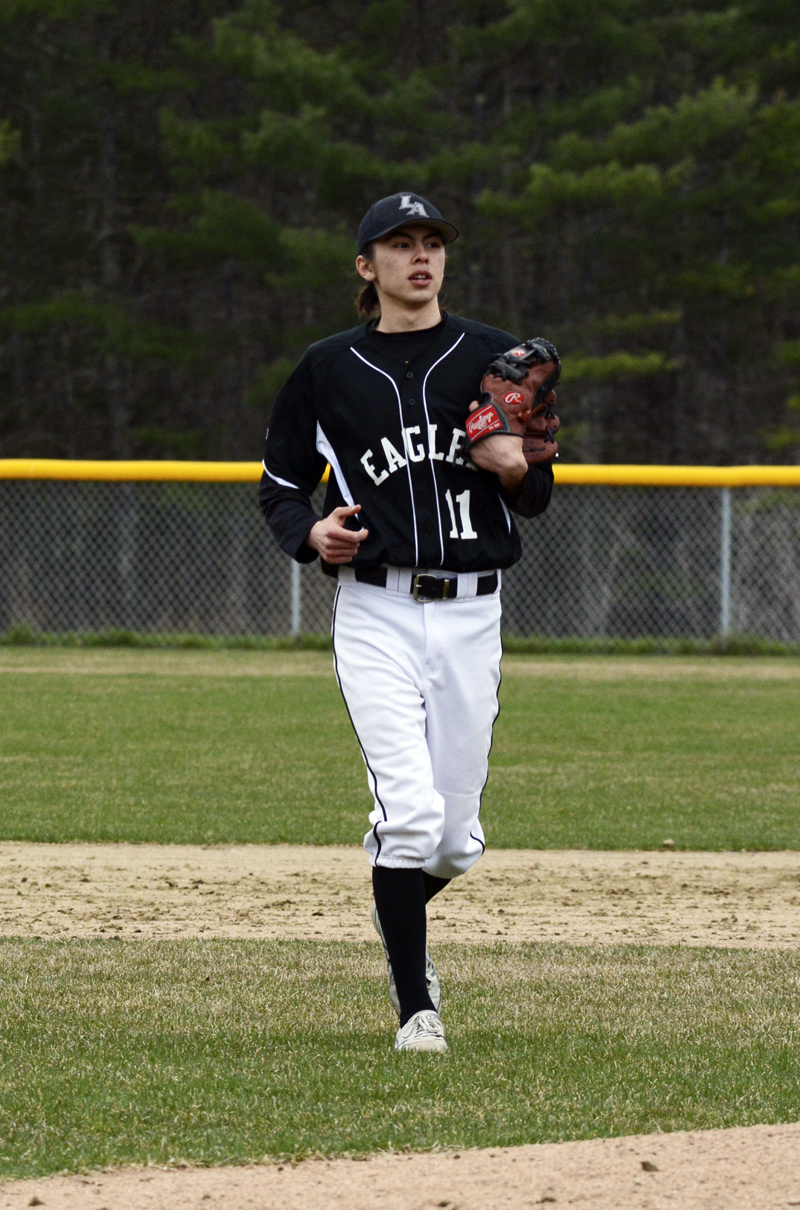 “First I found out there would be no Major League Baseball, and then the high school season was canceled. I wanted to have some baseball in my life. That’s when I pulled out the baseball cards.”

For Cumming, “pulling out the baseball cards” is no small project. He hesitates to estimate the exact size of his collection, but it numbers in the thousands. He has the cards his father and two uncles collected in the’70s,’80s, and’90s, as well as those he has collected since the early 2000s. “I figure we have almost all the cards from the last five decades.” And their worth? “Well, the value of baseball cards really peaked in the’90s, so not as much as it once was. But even if each card is only worth 25 cents, it’s still worth a lot. Put it this way: if this were a collection of quarters, we’d have a lot of quarters.” He does have a couple of cards that he figures have real value, including the 1991 Nolan Ryan card released to honor the player’s sixth career no hitter.’

“The blog sort of grew from there. I always try to make the stories interesting, even for people who don’t love baseball.” And as Cumming’s fans now number in the dozens, they are a dedicated bunch.

“I didn’t know anyone else remembered Jeff Burroughs the pro baseball player,” said Jeff Burroughs, the Head of School. “My father bought me a catcher’s mitt when I was a teenager, it was the Jeff Burroughs model, signature and all. I still have that mitt. Once Kelley forwarded me that installment of the blog, I was hooked.”

“Tiger’s writing is wry and a delightful mix of devoted fan and keen critic,” said Duffy. “He has an appreciation for both quirks of personality and details of data, especially when it comes to baseball. He posts a mix of personal stories and historical detail, and the combination is always entertaining and informative.”

Every day Cumming sorts through his cards and looks for interesting stories. If the story is about the card itself—as is the case with the 1975 Oscar Gamble card, where the player’s Yankees hat is an illustration added to the photo after Gamble was traded in the off season—Cumming has a personal rule that he must actually own the card. If the story has to do with an interesting moment in sports—as in the cancellation of the 2020 Women’s World Series depriving Japanese pitcher Ayuma Sato of her fourth MVP designation—he doesn’t mind pulling an image from the internet. “I don’t actually collect cards from the Japanese Women’s League, though that would be really cool.”

“Tiger is the perfect person to make an email blog like this,” said teammate and fellow LA senior Aidan McCullen. “In school I loved talking to Tiger about obscure teams in Australia and odd rules in football. Now, even though school is closed, I get to hear his fascinating thoughts about a huge range of baseball players.”

“Tiger has a natural ability as a storyteller,” said teammate Will Sherrill. “He gives a very personal background of each card before diving into the players’ history and statistics. While nothing can truly replace watching and playing baseball, Tiger’s blog gives me a daily reminder of how great the sport is.” 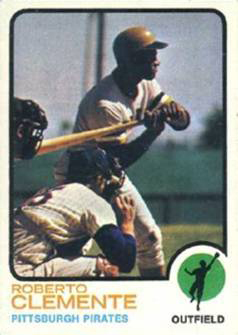 For the enjoyment of LCN readers, Tiger has willingly shared some of his daily blog excerpts with the newspaper, which are included below.

This is definitely one of my favorite cards in my collection. This is Roberto Clemente’s 1973 Topps card, and what is interesting about it is that he never played in the 1973 season. On Sept. 30, 1972, Roberto notched one hit, and that hit was his three-thousandth. It was also his last. Not intending to retire, Roberto was expected back for the ’73 season, so of course Topps printed his card. What Topps didn’t see coming was that Roberto would die in a plane crash while delivering aid to Nicaragua after an earthquake ravaged the country.

Roberto Clemente’s career ended with exactly 3,000 hits, and a .317 avg. Roberto was a 15-time all star, 2-time world series champion, 12-time gold glove winner, 4-time batting champion, NL MVP and World Series MVP. Roberto was inducted into the Hall of Fame by special election in 1973, with the standard five-year wait period being waived; it was the only time that has ever happened.

Because of his extensive charity work, the Roberto Clemente Award has been awarded every year since his death to a player “who has outstanding baseball playing skills and who is personally involved in community work.” I know a lot about a lot of different baseball players, but I only know about them as players. Roberto, as a person, was a really great guy from everything I have read. He got a shout out on the TV show “The Good Place” earlier this year saying he got into heaven.

A lot of people think baseball is boring and that’s not without reason. A person I trust once said to me, “Tiger, baseball is best enjoyed with a good book.” I get it. Thousands of MLB games are played every year, and many are never thought of again. But on June 12, 1970, the Pittsburgh Pirates and the San Diego Padres played a game that was definitively not boring, mostly thanks to all-around character Doc Ellis pitching a no hitter while under the influence of LSD. It was a Nolan Ryan special, no hits and eight walks. Doc claimed he couldn’t see the batters and at one point was under the impression that Jimmy Hendrix was batting and Richard Nixon was the umpire. Pitching should have been impossible, but he did it. Doc was also an athlete activist at a time when racial tensions were high, always speaking his mind and challenging team owners and their reluctance to start two black pitchers in the All Star Game. After his playing career, Doc checked into rehab and spent the rest of his life working with addiction recovery patients until his death in 2008 at 28 years sober.

Kirby Puckett was a ten-time all star and a six-time silver slugger. He was also shaped a little funny and always looked like he forgot his sunglasses. Kirby was 5’8” and 178 pounds—so a little short and a little round, but that didn’t stop him. What did stop him were his eyes. During spring training of 1996, Kirby woke up without vision in his right eye and was diagnosed with glaucoma, which put him on the disabled list for the first time in his MLB career. After numerous surgeries, his vision could not be restored and he retired in July of that year. 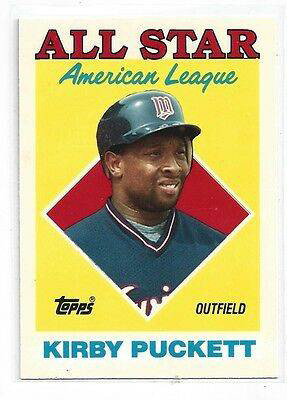 Because his career ended so abruptly, and while he was putting up all star numbers, Kirby was “robbed” of the typical 3-5 year decline a player normally has. I’m sure if you had asked him, he would have wanted to keep playing, but it did make his career stats look better. This established what my family likes to call the “Kirby Puckett standard” where we determine a player’s hall of fame worth based on their best twelve years. It is one of my go-to arguments when advocating for Dale Murphy. This is not to say that Kirby was not hall of fame worthy. In addition to his ten all star appearances and silver slugger, he was six-time gold glover and finished with 2,304 career hits, and had a good shot at 3,000 if he hadn’t been forced into retirement. The guy also won the World Series twice with the Twins. The Twins! Maybe it’s because I’m a 21st century fan, but that is inconceivable. In March of 2006, five years after being inducted into the Hall, Kirby Puckett died of a stroke at the age of 45. In the ten years between his retirement and his death, Kirby’s reputation was marred by a string of sexual assault charges, restraining orders, and death threats, which I had never heard about until I researched him for this feature. It was a little upsetting, as I had always thought of him as the cool underdog of the nineties, shaped funny, no steroids, and found success in Minnesota of all places. Never meet your heroes, I guess. Don’t even Google them. 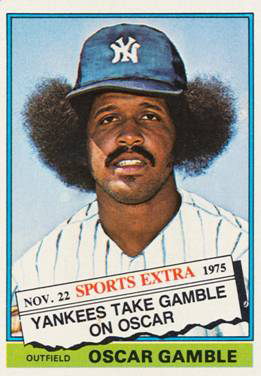 This is one of those rare instances where a baseball card is more famous than the player. For example, when you Google Oscar Gamble, this card comes up. Oscar had a respectable 17-year career with a .265 avg. and exactly 200 home runs. Thanks to this card though, his legacy lives on amongst card collectors and is a huge crowd pleaser at card shows all over the world. Because his trade happened during the off season, Topps had to paint on his hat. The Yankees have a strict policy that forbids hair longer than shoulder length and facial hair other than mustaches, and they made Oscar lose the afro so this card is all we get of the afro in a Yankees uniform. The series this card is from is a lot of fun. They all include recently traded players so there is awful airbrushing and they all have a unique headline like “Fergie Brings Fastball to Fenway” and ones that did not age as well like “Tribe Adds Pat Dobson to Wigwam.” After his playing days were over, Oscar retired to Montgomery where he went bald and opened a discotheque.

A lot of things have been canceled recently, and some of us are missing the MLB season, or the NBA playoffs, but one of the most exciting sporting events that got axed this summer was the women’s baseball world cup hosted by Mexico. Every other year, the best female baseball players compete in the most elite tournament women’s baseball has to offer, where the best teams in the world battle for the privilege of losing to Japan, the renowned best of the best. Japan is unstoppable. It has won the last six world cups in a row, and a big reason for its success is Ayami Sato. Ayami was named the tournament MVP in 2014, 2016, and 2018, with her ERA never going above 1.33. In 2014, her ERA was 0.00 at the end of the tournament. This summer we were supposed to see if she could win back-to-back-to back-to-back. In 2018, Ayami pitched a complete game 1-hitter against the host USA using only 88 pitches. She throws low 80s and her slider is filthy. 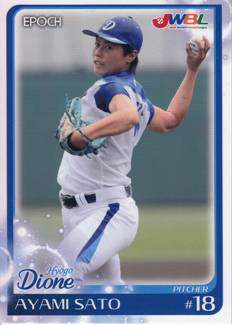 The baseball world doesn’t appreciate her as the “greatest of all time” yet, but odds are that Ayami will just keep winning until we have to pay attention to her. She has won the world cup five times, and it doesn’t look like she’ll be stopping anytime soon.