Lincoln Academy boys won the KVAC Class B track and field championship on May 26 at Mt.Ararat in Topsham. Steady rain fell throughout the day making for a soggy meet. Lincoln scored 91 points to beat out Cony by 10 points. Sam Russ scored 23 points for the Eagles, with two first place finishes in the 3200 and 1600 distance races and second place in the 800. Jarrett Gulden scored 20 points, taking second in the 1600 and third in both the 800 and 3200. Lauren Pusey-Nazzaro scored 14 points, taking second in the long jump and third in the triple jump. 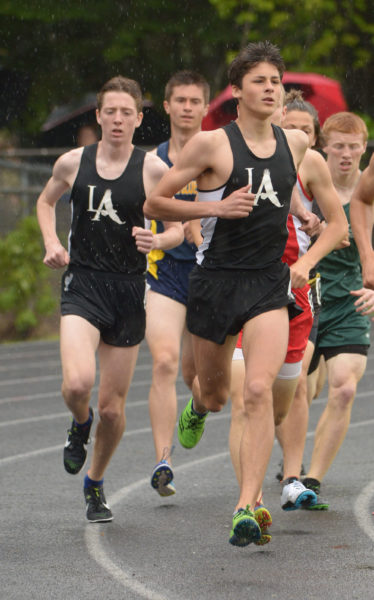 Sam Russ (left) won the mile run and Jarrett Gulden placed second for the Eagles in the KVAC championships on May 26 at Mt.Ararat. (Paula Roberts photo)

Lauren Pusey-Nazzaro flies to a third place finish in the long jump at the KVAC championships. (Paula Roberts photo)

A full report will appear in the May 31 issue.