Lincoln Academy and Oceanside girls soccer teams battled to a 2-2 tie in their KVAC opener on Sept. 1 under the lights in Newcastle.

After a scoreless first half, Chelsea Williams scored  to give the Eagles a 1-0 lead less than three minutes into the second frame. Hope Butler put in a rebounded Hannah Benner shot mid-way through the period to tie the game. Abby Veilleux gave the Mariners the lead with 17:49 to play on a direct kick from 35 yards out.

Tatum Hancock tied the game with five and a half minutes to play when she put in a rebounded Williams corner kick. 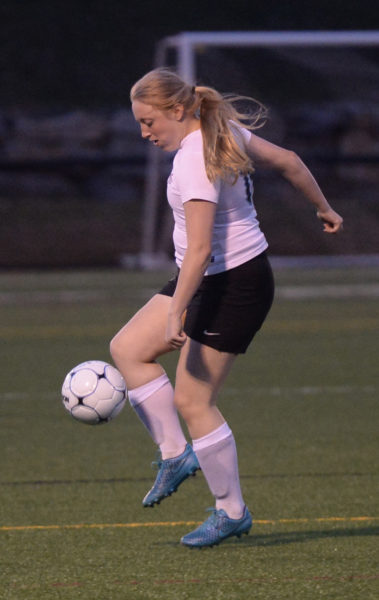 Paige Camp pushes the ball out to the wing in the Lady Eagles 2-2 tie with Oceanside. (Paula Roberts photo)