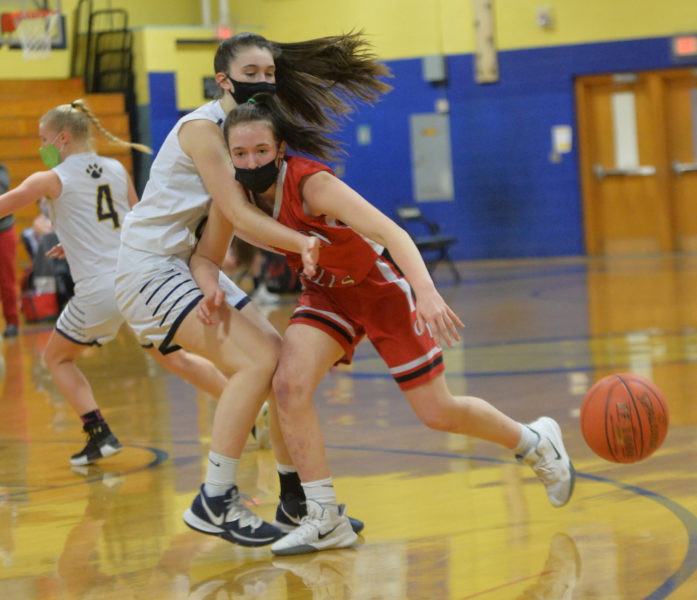 The Medomak Valley girls basketball team won a 56-53 overtime thriller over Camden Hills on Friday, Feb. 19 on the Panthers’ hardwood.

Medomak jumped out to a 6-0 lead when Addison McCormick crashed the glass for two straight baskets and Abby Lash scored on an Autumn Ripley pass after a Grace White steal. Camden scored the next seven points, beginning a 16-3 run, to end the quarter with a 16-9 lead. 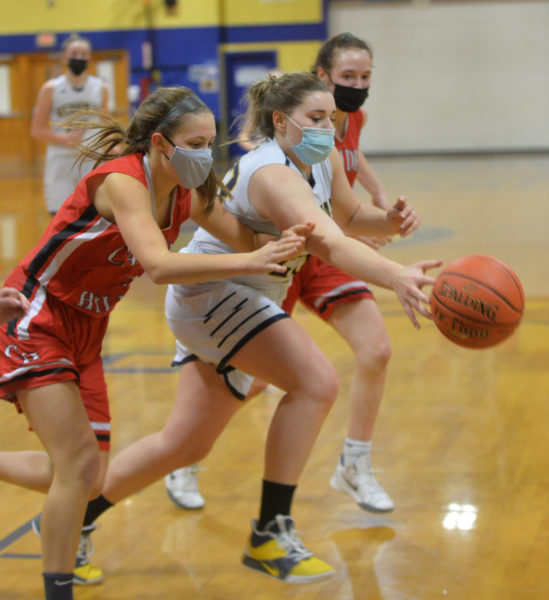 Amelia Johnson opened the second frame with a big 3 to boost Camden’s lead to 10. A 7-2 Panther run, led by two hoops from McCormick, cut the lead to five. Tessa Whitley hit a 3 for Camden to boost the lead to eight.

The Lady Panthers rallied for 10 straight points to take the lead with 53 seconds to go in the half. Julia Kunesh scored on a McCormick feed. Maya Cannon scored three straight hoops on a pass from Lash and off the offensive boards to tie the game. Lash hit two at the charity stripe to give Medomak the lead. Ella Powers hit a 3 for Camden before Lash sank a foul shot with time expired to tie the game, 27-27, at the end of two.

Lash hit two at the foul line to open the third with a two-point lead. Camden scored the next nine points, led by two baskets from Powers and a 3 from Molly Hixon. Down seven with four minutes to play, Medomak rallied with a 10-2 run to take a 43-42 lead at the end of three. Sara Nelson started the rally with a basket, Cannon hit two shots, Julia Kunesh settled two at the foul line, and McCormick scored to recapture the lead for the Lady Panthers.

Medomak opened the fourth with a 6-2 run on a basket from Cannon and two from McCormick to take a six-point lead. Camden cut the lead to two. McCormick hit back-to-back hoops off a Lash feed and a Ripley steal to boost the lead to six. Camden netted the final six points from Whitley, Molly Shook, and Amelia Johnson to tie the game at 53-53 and send it to overtime.

Neither team would score a basket from the floor in overtime. Lash made a foul shot three minutes into the five-minute period. Camden was forced to foul after Medomak steals by Cannon (35 seconds to play) and Lash (four seconds left). Ripley sank two of four shots to seal the win.