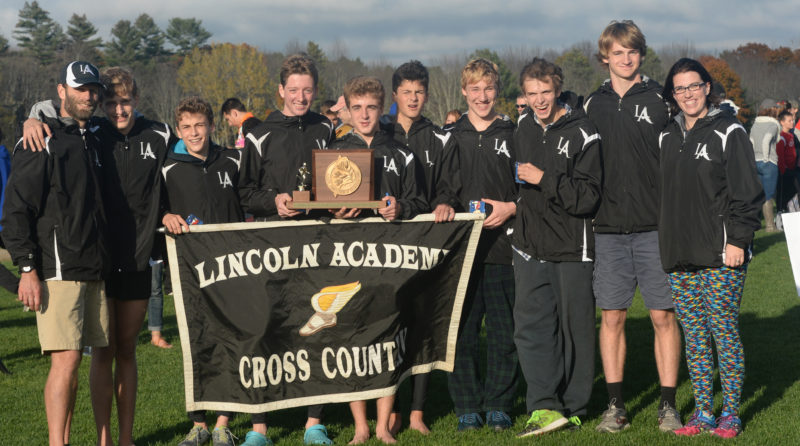 The Lincoln Academy boys cross-country team won the state Class B championship under beautiful, sunny skies Saturday, Oct. 28 at Twin Brook Recreation in Cumberland. The Eagles placed five scoring runners in the top 21 to win with 56 points. They won by a landslide, with nearest competitors Freeport scoring 114 and Yarmouth 115 points.

The last time Lincoln Academy won a state team championship in cross-country was 72 years ago, in 1945.

Both the girls and boys cross-country teams were presented with the South Class B Good Sportsmanship Award, which was the icing on the cake for the state champion Eagles. Coaches in each class vote on the award.

The Eagles’ five scoring runners took a combined 62 seconds off their times on the same course the week before when they won the Class B South regional championship. The state win was the completion of a a trifecta for the Eagles, as they have now won the KVAC Class B title, the South B regional title, and the state Class B championship. Lincoln Academy finished its KVAC season undefeated.

With the state championship win, the Eagles qualify for New Englands, to be held at Troy Howard Middle School in Belfast on Saturday, Nov. 11.

Junior Sam Russ paced Lincoln Academy to victory, placing fourth in a time of 17:11, two seconds faster than at regionals.

Sophomore Jarrett Gulden placed sixth in 17:15. Gulden shaved an astonishing 23 seconds off his regional time. Both Russ and Gulden finished in the top 10 to medal, and both placed in the top 30 for all classes to qualify for New Englands as individuals.

Senior David Barnum shaved 17 seconds off his regional time to place 11th in 17:37 in his best race of the season. Before the race, Barnum said he was “really excited” to win regionals, and “so glad we are going to states with a good chance of winning in my senior year. I love running with these guys and am so glad to be a part of it.”

All five of the Eagles’ scoring runners were recognized for finishing in the top 30 in state Class B.

Erskine Academy placed seventh at the North B regionals the week before to qualify for the state Class B meet. Four Erskine runners are Lincoln County residents. Osiris Marable, of Somerville, placed 46th in 18:52; Andrew Robinson, of Jefferson, placed 83rd in 20:15; Luke Hodgkins, of Jefferson, placed 99th in 21:03, and Zavian Marable, of Somerville, took 107th in 22:13. The Erskine Academy boys team was presented with the Class B North Good Sportsmanship Award.

“I’m mostly relieved at this point and happy for our boys,” coach Garrett Martin said. “They showed a lot of growth and improvement with their performances on Saturday and had certainly done the work over the last year to be in a position to win. The fact that they did so by such a wide margin was truly impressive.”

Martin said Lincoln has been ranked among the top teams in the state all season and “we proved that we were worthy of that ranking on Saturday. The fact that almost everyone ran faster than they did a week ago on the same course at regionals says a lot about the mental preparation and teamwork of our guys.”

Benji Pugh showed his toughness “by running through intense pain to finish as our fourth runner while running two seconds faster than last week,” Martin said. “Ultimately, our margin of victory on Saturday was greater than it was at the regional championships, which is an impressive feat since the state meet is more competitive than the regional races,” Martin said.

“We couldn’t be more thrilled to bring home Lincoln Academy’s first cross-country state championship in 72 years,” Martin said. “The support we’ve received all season from parents, the school, The Lincoln County News, and the community has been great. Thanks especially to the Lincoln County Sheriff’s Office and to the Damariscotta and Newcastle fire departments for escorting the team home on Saturday. That was unexpected and way more fun than any of us could have anticipated.” 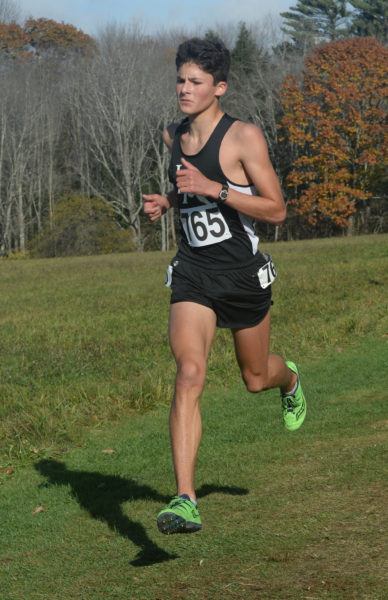 Martin thanked people in the community who have helped get young athletes interested in running cross-country, including Cindy Allen in Jefferson, Joel Russ at Great Salt Bay Community School, and Jason Bigonia in South Bristol. “Thanks in part to their efforts, the cross-country program at Lincoln Academy has a bright future. Hopefully we won’t have to wait another 72 years for our next title,” Martin said.

“To have a championship-caliber team, you need more than a few fast runners,” Martin said. “You’ve got to have depth and be able to perform when it counts. To do that, you have to engage kids who are willing to work hard, logging countless miles in relative obscurity over several years.

“No one typifies the work ethic of this team more than senior David Barnum. As a freshman, he barely broke 21 minutes and didn’t even qualify to run in the state meet. Now he is a vital member of a state championship team, placing 11th on Saturday in a time that was almost four minutes faster than what he ran on this same course as a freshman. That success didn’t happen overnight and is a direct result of patience, perseverance (he had to overcome a case of Lyme disease this season), and thousands of miles of running on local trails and roads over the last three years.

“Ultimately, winning in cross-country is about more than finding a few fast runners willing to grind out the miles on their own. It’s about building an inclusive community where everyone, regardless how fast he or she runs, is striving for excellence. As Steve Prefontaine said, ‘It’s not about where you finish, but rather how far you’ve come from where you started.’

“Everyone on our team – whether they ran on Saturday or not – helped us get to this point. I especially give credit to our seniors, including captains Levi McAtee, Emma Allen, and Grace Wehrle, for being instrumental in setting high standards and growing the program over the last few years. A state championship combined with two sportmanship awards and a record number of team members this year is quite a legacy for them to leave behind.”

Of qualifying for New Englands, Martin said, “This is the first time Lincoln has ever secured a spot in New Englands and gives our guys one last shot at laying down some personal-best times.” 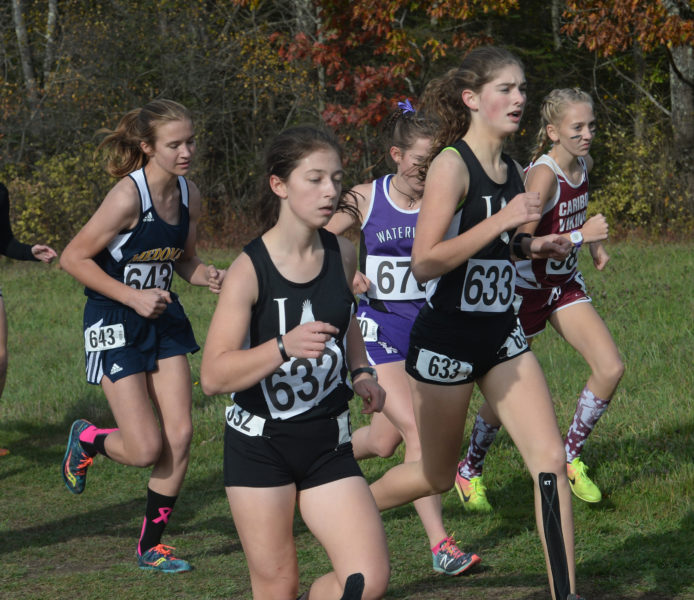 Medomak Valley’s Serena Blasius and Lincoln Academy’s Emma Allen and Ella Villeneuve run in a pack at the start of the state Class B championships. (Paula Roberts photo)

With four sophomores and a junior returning next season, Lincoln looks to make another run at the KVAC, regional, and state titles.

“Senior Emma Allen and Freshman Ella Villeneuve did a great job on Saturday,” Martin said. “In Emma’s case, she just missed qualifying for states last year and has been focused on getting back to the state meet after doing so as a sophomore. She ran a solid race to cement her legacy at Lincoln. Ella demonstrated that she has a bright future ahead, knocking 28 seconds off her time from last week and holding her own against very stiff competition. Outside of Essie Martin’s 32nd place at states in 2013, Emma and Ella secured the strongest finish for LA girls at states since 2009, when Nikki Leeman came in 12th.”

“The goal for our girls next year will be to break up the juggernaut of southern Maine schools and qualify for states as a team,” Martin said. “To do so, we’ll need to find some new recruits capable of filling in the holes in our lineup that will be left by the departure of Emma, Grace Wehrle, and Tahlia Mullen.”