Seeded ninth and one place out of a playoff berth, Medomak Valley boys basketball team needed a big win. They got it Thursday night (Jan. 31) with a 52-50 win over fifth seed Messalonskee in the Panthers den.

The game was a battle from the opening tip-off, with the two teams tied 11-11 after one and Medomak leading 24-22 at the half. Medomak opened up a five point lead after three, 38-33, before building their lead to nine two minutes into the final period. Tucker Charles scored seven straight points and Jacob Perry hit a three for the Eagles to take a one point lead with three minutes to play. Freshman Patrick McKenney hit four straight foul shots to give Medomak a three point lead. Noah Wood pulled the Eagles within one. McKenney netted one at the line for a two point Panther lead. Charles hit a big three for Messalonskee with 30 seconds left to give the Eagles a one point lead. Gabe Allaire drove inside for two and made good at the line for a three point play and two point Panther lead with nine seconds to play. McKenney stole the ball at the other end, and held on as the Eagles pounced on him to tie him up. The possession arrow was in the Panthers favor, and 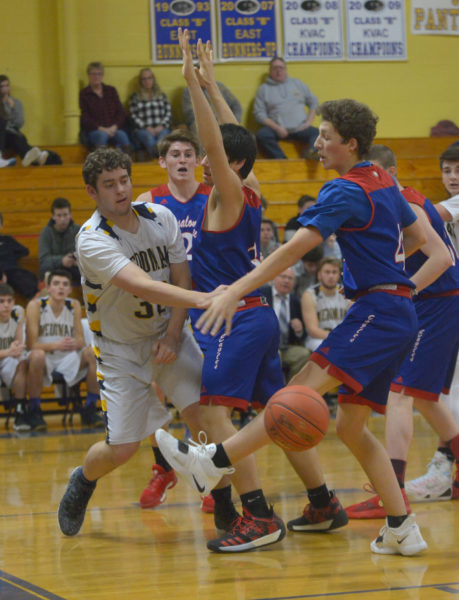 Nathan Emerson passes the ball outside in the Panthers win over Messalonskee. (Paula Roberts photo) 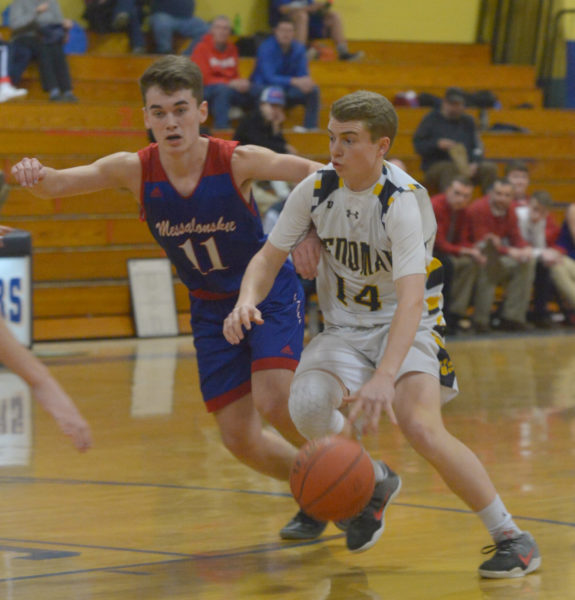 Patrick McKenney drives down the middle for the Panthers. (Paula Roberts photo)

they held onto the inbound ball for the win.

Medomak was led by Trevor Brown 13, and Allaire 11. Messalonskee was led by Charles with 22, Matt Parent 12 and Noah Wood 10.