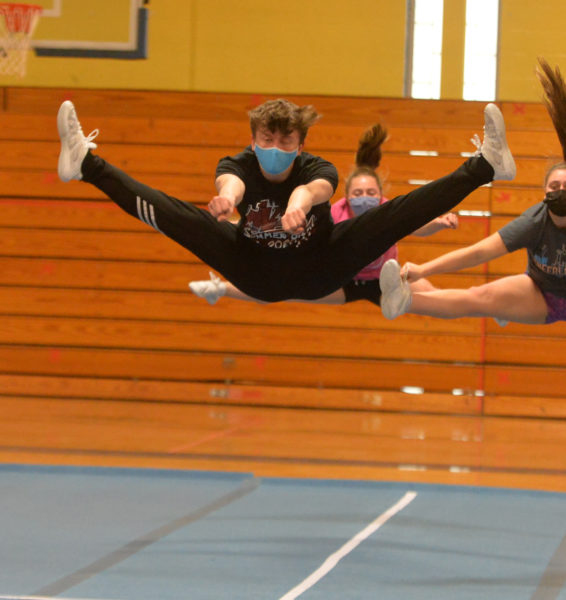 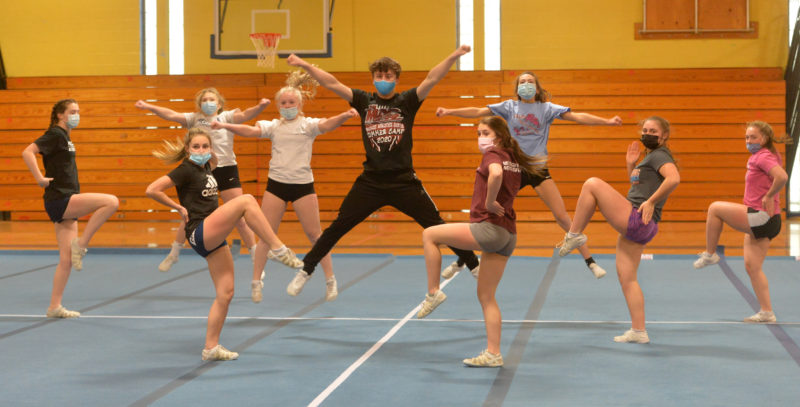 Medomak scored 61.2 points for second place and Hermon 64.4 for first. The Panthers squad has placed third at states the past four years, so coach Heather Simmons is excited to add to the team’s banners hanging in the school gymnasium. “They are going to have to move our banners to another wall. We are running out of room,” Simmons said.

Medomak cheering squads were State runner-ups in 2013, 2014 and 2015. They have won eight KVAC championships, 10 Regional titles and were Regional runner-ups once.

Teams and coaches had to adjust to a new scoring sheet this season, due to COVID-19 imposed restrictions on the sport. Cheerleaders were not allowed to do verbal cheers, or large group pyramids. Smaller partner stunts were allowed. In the state virtual meet, each team performed their routine in their home gym, which were videotaped and sent electronically to a panel of judges.

Medomak was down one athlete for their virtual state performance. Aaliyah Thompson stepped up to fill in at base. This is the second year Thompson has had to step in for a missing teammate. In 2020, she had one hour practice to fill in for Emily Mahoney, who broke her hand in practice the night before states.

In their 2021 State Class B virtual performance, Medomak performed their routine flawlessly. “We did a practice run through, then performed. It could not have gone any better,” Simmons said.

Medomak added more elite stunting skills to their routine “to drive their stunting scores” in an effort to challenge Hermon for the gold.

Simmonds said her squad worked on execution of their routine all season. “We knew after seeing the competition that we had to push a little bit. We said we were willing to take that risk and it paid off,” Simmons said of adding more difficulty to their routine.

The season of COVID, with rule changes, masks and new rules put added stress on athletes, including 10 day quarantines. “We had to quarantine on three separate occasions. Not the whole team. It takes months to get confidence and continuity. We were lucky to have Aaliyah. That just does not happen, usually you do not get that lucky,” Simmons said of having an athlete who could step in and fill a vital role on the team.

“We are very fortunate that our school board approved athletics. I was one who was pushing for athletics this winter. I knew just from having my own children. They were longing for something else other than looking at a computer screen. I applaud all the kids who participated on a team.” She sited COVID regulations like hand sanitizing, one at a time water breaks and masks as being disruptions in athletes normal routines. “You did not know if you were going to be in school week to week. There were so many inconsistency, sports was something to look forward to. It was beneficial to the kids.”

“If we could only get rid of the masks. It was hard for me to wear one, I can not imagine what the athletes went through. They were exhausted, but they did not complain and they always wore their mask correctly.”

Medomak has no seniors on the squad. “We are so excited for 2022. The kids are putting in a lot of effort in the off season. They are fired up to beat Hermon. They are only beating us in difficulty and stunts so we know where we need to push,” Simmons added.