Medomak Valley defeated Oceanside 60-45 in a physical match-up in the Panthers den on Feb. 26. The Panthers jumped out to a 19-9 first quarter lead thanks to an 11 point run. Medomak led 29-22 at the half and 41-36 at the end of three. Patrick McKenney had five assists in the fourth quarter, feeding Jacob Craig twice and Trevor Brown three times to spark a 19-9 run in the final frame.

Medomak was led by Craig with 18, Brown 16 and McKenney 10. Oceanside was led by Bohdi Ames with 10 and Everett Allen 9.

Jacob Craig goes inside for the Panthers. (Paula Roberts photo) 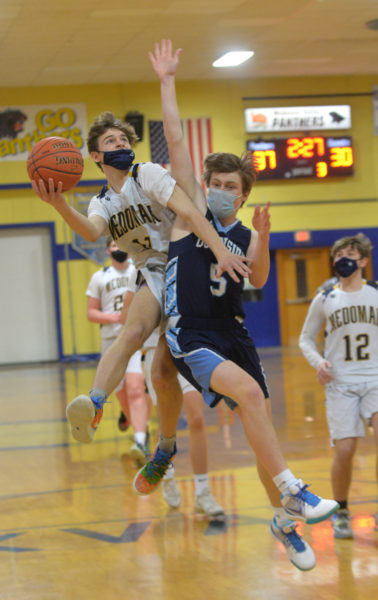