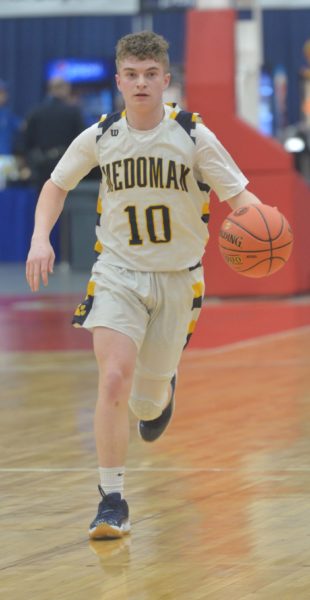 Patrick McKenney brings the ball up during a playoff game at the Augusta Civic Center. Two years after an aneurysmal bone cyst broke his right arm, McKenney is back at the top of his game. (Paula Roberts photo, LCN file)

Dec. 21, 2017 is a day that stands out in Medomak Valley sophomore point guard Patrick McKenney’s memory. It was a day when the seemingly healthy 13-year-old Great Salt Bay Community School eighth grader was brought face to the face with the reality that he might never be able to play basketball, the game he loves, again.

While playing dodgeball in physical education class, Patrick threw a ball. His shoulder moved forward, but the rest of his arm stayed behind him. His arm “flopped back” like a rag doll. “It literally snapped and bent backward at a 90-degree angle. I just grabbed it and pulled it back in position,” Patrick said.

“He was in a lot of pain,” his mother, Anni Pat McKenney, said.

“I almost fainted in class,” Patrick said. “Everyone was in such a shock, but only a few close to me saw it.”

Originally it was thought that Patrick had dislocated his shoulder, but after a trip by ambulance to LincolnHealth’s Miles Campus, an X-ray revealed that his humerus, the long bone in the upper arm, was broken.

Moran splinted the arm and ordered an MRI for the next day. Moran found the MRI results encouraging, but because there was so much swelling, he wanted to wait for the swelling to go down before doing more tests.

After another  X-ray, Moran could not tell what kind of cyst it was, according to Patrick’s father, Chris McKenney. Another MRI was done.

“Dr. Moran called and said, ‘We really cannot tell what it is; we’re concerned,’” Chris said. “He contacted people at Boston Children’s Hospital. They knew it was not the unicameral (bone cyst). Portland (Maine Medical Center) had never seen anything like it.”

“Dr. Moran was right on it and got us connected to Boston,” Anni Pat said.

An appointment was made for Patrick with Dr. Anderson, an orthopedic oncologist in Boston, at 9 a.m. the next day for a consultation.

It was a long night, as the McKenneys feared the worst — cancer.

“As we drove down for the biopsy, we were struggling with it,” Chris said.

“I asked Patrick if he was scared and he said, ‘A little bit.’ I said I was too,” Anni Pat said.

The next morning, Anderson looked at the MRI forwarded by Miles and immediately knew it was an aneurysmal bone cyst.

Having fearing the worst, the McKenneys breathed a huge sigh of relief. “It was the first sign of relief in a month,” Anni Pat said.

Patrick had three cysts in his right arm, his shooting hand. The  largest was 10 centimeters.

An aneurysmal bone cyst is a highly destructive benign bone tumor. It occurs in less than one in 100,000 people per year. The term “aneurysmal” refers to the explosive, expansile nature of the bone containing the cyst, similar to the enlargement seen with blood vessel or heart aneurysms.

The cysts usually appear only in children, with the most common locations being the arm, leg, pelvis, and spine.

It is believed that in the cysts, an oncogene, which is a tumor-causing gene, triggers the development of destructive tumor tissue. The oncogene also triggers production of an enzyme called matrix metalloproteinase, a protein that attacks and destroys the underlying structural matrix of bone. It also triggers the expression of vascular endothelial growth factor, a protein signal in the body that increases blood supply. Increased blood supply allows the destructive tumor to grow more rapidly.

Aneurysmal bone cysts historically have been treated by surgical removal of the diseased bone, or removal of the tumor by scraping it  out of the bone. Sometimes it is necessary for the bone to be supported by metal, bone graft, or cement implants. Sometimes the cysts can be made smaller with radiation therapy or medical therapy, but usually this does not cure the tumor completely.

The McKenneys were told about an alternative therapy for aneursymal bone cysts that kills the tumor cells, inhibits the growth of osteoclasts, inhibits blood vessel growth, and inhibits the destructive enzymes that destroy bone. The treatment also triggers the body to heal the weakened bone by stimulating the growth of healthy bone-building cells.

Faced with the real possibility that Patrick would never be able to play basketball again if they opted for traditional treatment, the McKenneys decided to go with the alternative route, so they could give Patrick the best possible chance of returning to the hardwood.

“Traditional surgery, where they go in, scrape the whole thing out, and sometimes do a  bone graft, is pretty invasive surgery,” Chris said.

The alternative treatment involved a series of shots of doxycycline every three months. Patrick was put under anesthesia during the treatments.

In this relatively new treatment, called sclerotherapy done by interventional radiology, doxycycline is injected into the tumor to shrink it so new bone can grow.

“They only do it in Boston,” Chris said.

During the procedure, “they drill into the bone and inject it in three places,” Anni Pat added. 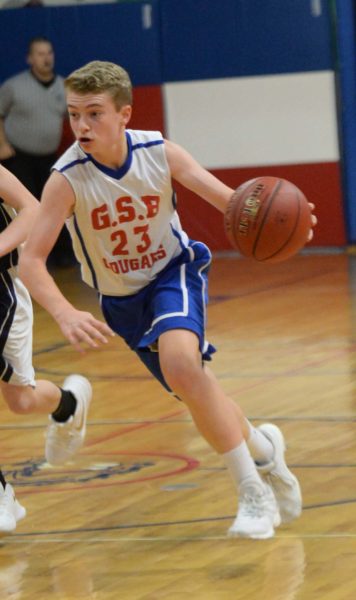 Patrick McKenney dribbles the ball up the court for Great Salt Bay Community School, just two weeks before an aneurysmal bone cyst caused the humerus bone in his shooting arm to break while he was throwing a ball. (Paula Roberts photo, LCN file)

So far, Patrick has undergone eight different treatments, his last in June 2019.

“The good part about it is, he can have an injection and as soon as he feels better, he can play,” Chris said. Patrick only has to miss one or two days to recover.

Patrick sat out for 10 months while he waited for the break to heal and the infection to clear up. “The first time (he had the treatment), the bone was so weak, they could put the needle right through it,” Chris said.

“I missed so much, not playing. I felt like I fell behind,” Patrick said of not being able to play basketball.

The toughest part for Patrick was not being able to participate in contact sports. He could shoot a basketball, but could not play because of the risk of more breaks, Anni Pat said.

“It was kind of heaven sent, he only missed junior high,” Chris said.

Normally with this type of cyst, it starts to hurt, so it is detected earlier. “If we could have caught it before it broke, it would have saved him six months,” Chris said of Patrick’s recovery time.

“He said his shoulder was kind of hurting. He plays a lot of basketball and puts a lot of shots up, so we thought it was just sore,” Anni Pat said.

Amazingly, Patrick had scored 28 points in a basketball game against Medomak less than 24 hours before his arm broke.

Patrick had an episode this past season when his shoulder started hurting and the McKenneys were fearful the aneursymal bone cyst had reared its ugly head again, but an X-ray showed everything was fine.

Patrick still has to have X-rays every three months, which he can have done locally in Damariscotta. His next one is this month, with a follow-up in Boston with an orthopedist.

“If it starts to pop up, we will set up an appointment and inject him.  We do not know how long he will have to go through this,” Chris said.

“It is amazing he is back to playing like he is,” Chris said.

Two years after the break, Patrick is a sophomore starter for Medomak Valley, which went 15-3 and was seeded third in North Class A heal points. He went from not knowing if he would ever play again to playing in the North Class A semifinals in February.

He  was named to the KVAC Class A first team and tied  sophomore teammate Trevor Brown for the most points scored by a Medomak player this season at 311.

“He’s a kid that’s just determined at what he loves to do, and that is to play basketball. He has gone through a lot of adversity, but he is a soldier. He battled back,” Medomak Valley boys basketball coach Nick DePatsy said.

“I am happy it’s OK. It could have been worse. I am happy to be playing again,” Patrick said.