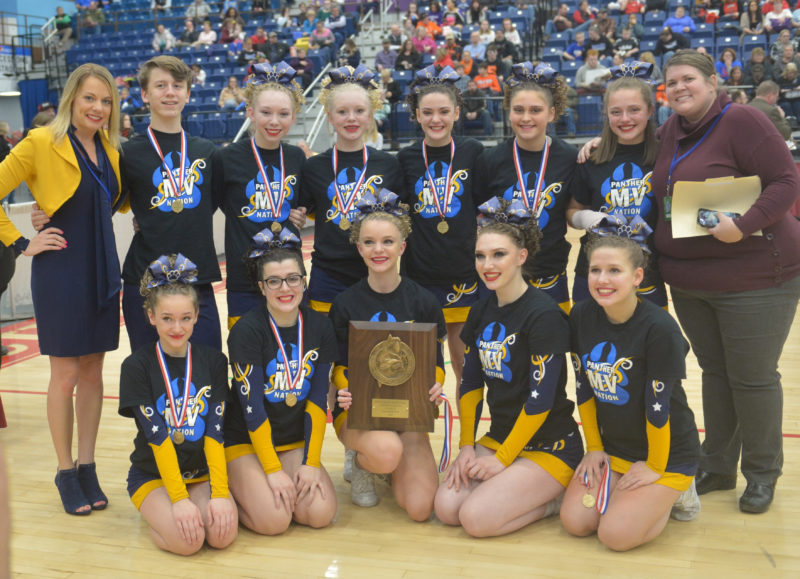 2020 South B Regional cheering champions, the Medomak Valley Panthers. The Regional title was the 10th straight for the Panther squad. (Paula Roberts photo)

The Medomak Valley cheerleaders won their 10th straight regional title on Saturday, Jan. 25 at the South Class B championships, held at the Augusta Civic Center.

The Panthers’ routine was not perfect, but it earned them 5.5 more points than at KVACs on Jan. 20, and it was good enough to beat the 2020 KVAC champion, Leavitt High School. Medomak scored 81.7 points to beat out the Hornets with 73.9.

The loss to Leavitt at KVACs “was great motivation,” coach Heather Simmons said. Twelve hours before the start of KVACs, Medomak lost one of its bases to a broken hand and had to scramble to rework its routine. The team had five days to prepare for regionals.

“We knew after Monday (KVACs) that we just had to focus and do it. We had our sad moment. We knew we had the talent. They were very driven and focused and put in the hard work. You can let a defeat eat at you or you can focus to get better – work on it to make the outcome different. Everyone is in the hunt for the trophy. You needed to be confident, and they certainly were,”  Simmons said.

Medomak worked on cleaning up its routine all week. “When Emily (Mahoney) went down on Sunday, (Jan. 19), we quickly came up with a plan to salvage our routine,” Simmons said.

“Regionals are very fast-paced compared to KVACs. We prepared for every situation. We try to put every situation out there. You have to be able to execute with mistakes,” Simmons said.

Simmons said the team’s motto this year was togetherness. She said putting a routine together “is a puzzle.”

“We put them in situations where kids have to step up,” she said. “At the beginning of the season, we said, ‘We are going to put out the best performance we can and do it with everybody.’”

Heading to states, which will be held Saturday, Feb. 8 at the Augusta Civic Center, Simmons said, “we are going to focus on being the best versions of ourselves we can.”

“We have a lot of support,”  Simmons said of administrators, parents, and the community. “There is a lot of school pride and pride in themselves.  I think that is half the battle.”

Of the team’s 10th straight regional title, Simmons said, “number 10 feels like the first time. It has been a tough week. We just prayed they could pull it out. It felt good.”

Lincoln Academy placed 10th out of 11 teams with 41.8 points, just two-tenths of a point behind its KVAC score. Coach Danielle Feltis was pleased with the score, considering the team had three bases out due to illness. Feltis said the Eagles reworked their routine at the Augusta Civic Center during their warm-up time, just minutes before competing.