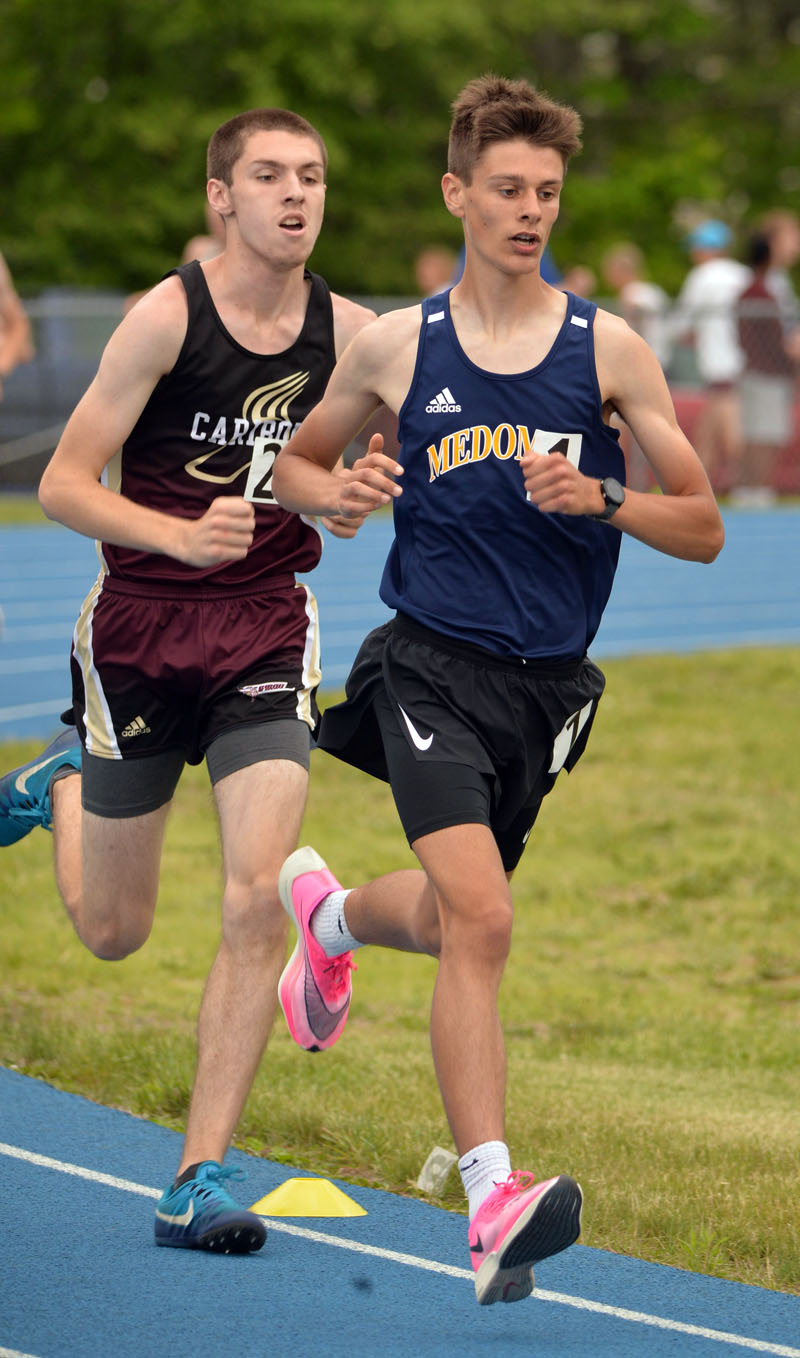 Medomak Valley runner Connor Daigle leads the field in the 3200-meter at the state Class B championship on Saturday, June 2. Daigle broke his own school record in the event in 9:42.61. (Paula Roberts photo)

Medomak Valley junior Connor Daigle was denied the opportunity to run for a cross-country state championship last fall due to a COVID-19 outbreak at the school, but he made up for it in grand fashion on Saturday, June 5 at the state Class B track and field championships in Bath.

Daigle blew away the competition in the 3,200-meter race. His time of 9:42.61 broke his own school record in the event and beat out nearest competitor Owen Perry, of Cape Elizabeth, by a whopping 15.84 seconds.

Daigle, who was undefeated during the regular season, took the lead at the start of the race and never relinquished it. Near the end of the race, one of the flaggers told Daigle he had a 200-meter lead.

“And that’s when I kicked it into high gear,” Daigle said.

Daigle scored all 10 of Medomak’s points at the state meet. MCI won the state title with 88 points, beating out York by four points.

“I am incredibly impressed by Connor Daigle’s work ethic and drive to become this year Maine’s top 2-miler,” coach Chuong Nguyen said. “We are excited to see where Connor can go with cross-country and next track season.”

Daigle was undefeated last fall in cross-country and a favorite to win a state title when the season got sidelined due to a COVID-19 outbreak at Medomak Valley.

“It was very disappointing,” Daigle said. “Going into that season I knew I was going to make a lot of noise and do something no other runner at Medomak Valley had ever done.”

To prepare for both cross-country and track seasons, Daigle ran 60-80 miles a week. With no indoor track season this winter due to COVID-19, Daigle had to motivate himself to stay in shape.

“I tried to run twice a day and hit the weight room three days a week,” Daigle said. “I did three hard running workouts a week — tempo, hills, and intervals.”

He ran outside all winter, wearing shorts in temperatures as low as two below zero. His parents bought him a treadmill for Christmas, which “helped out quite a bit.” Daigle said. He just about wore it out. “We definitely got our money’s worth out of it.”

Earlier in the track season Daigle placed third in the 3,200 at the KVAC championships. He said he had a “bad day” but still managed to shave seven seconds off the school record.

When asked how he kept himself motivated during the pandemic, Daigle said, “I just want to be the best version of myself I can be. Once you have that mindset, you want to apply yourself.”

Although the New England Track and Field championship meet has been canceled this spring, Daigle is thinking about competing in the East Coast Track and Field Championships in New Jersey. He is four seconds away from breaking Medomak Valley’s mile record, and would likely compete in both the mile and two-mile.

While he plans to run in college, Daigle still has a year to go at Medomak Valley and has his sights set on a state title.

“I am locked in for cross-country this fall,” Daigle said.