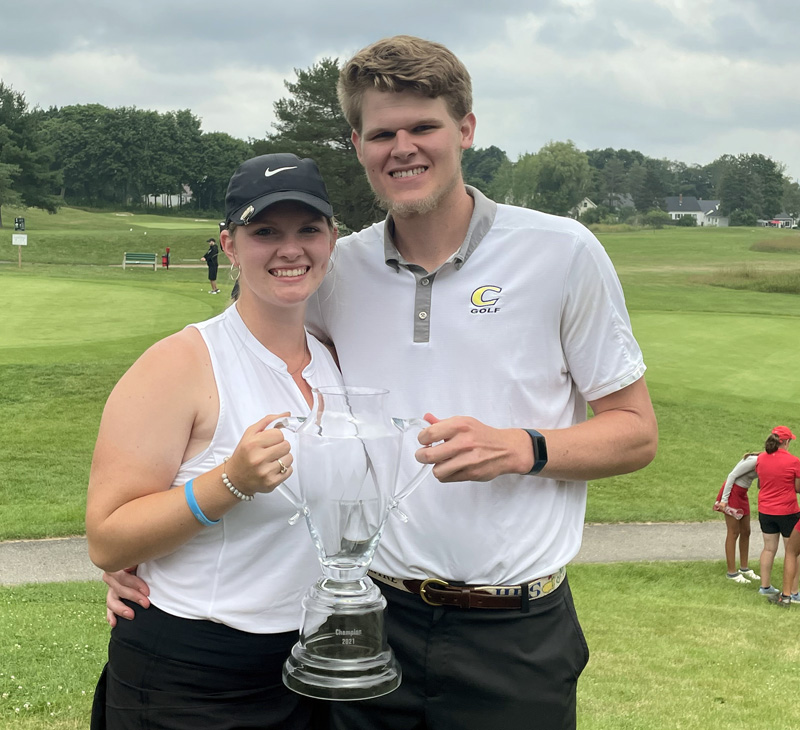 This was Plourde’s second Maine Women’s Amateur championship, having won in 2018. She was runner-up last year, losing in extra holes to Ruby Haycock. In all, Plourde has been runner-up in the tournament three times. She has also won “three or four” Maine Junior Tournaments. Plourde is also a three-time state schoolgirl gold champion and finished runner-up at states one year.

Plourde jumped out to a three-stroke lead the first day with a par 71. She led defending champion Haycock by five strokes and led Kristen Kannagieser, who was in second place after day one, by three strokes.

“I felt very good, confident,” Plourde said. She has spent most of the summer playing golf in Kentucky. “I have been working on my game and am more confident. I have focused on my own game.” 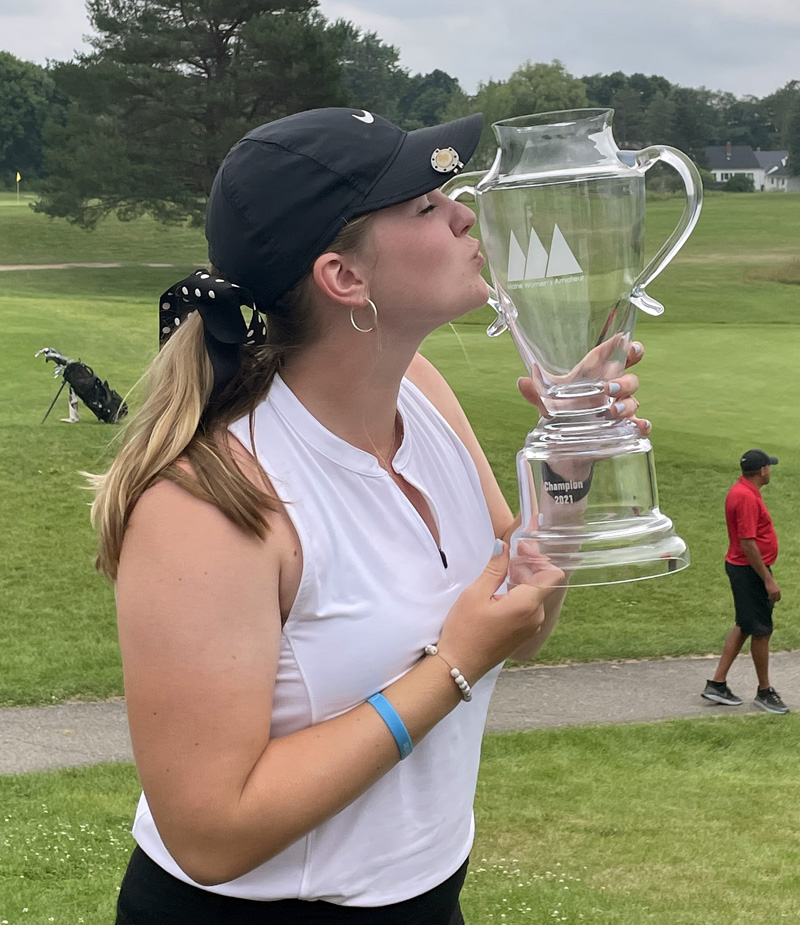 “I played pretty consistent. I had a couple of birdies and a couple of bogeys and ended up even,” Plourde said of her efforts on the first day.

On day two of the tournament, Plourde shot a one over par for a 72 and took a six-stroke lead. She bogeyed back-to-back holes on seven and eight. “I bounced back and came back strong,” Plourde said of finishing the back nine two under.

With a six-stroke lead on the third and final day of the tournament, Plourde said she felt really relaxed. The lead group was supposed to have gone last, but with impending rain, they were moved up to the first group of the day.

Plourde said going first kept her from getting nervous in anticipation of playing, and that a birdie on four helped her to relax.  At one point in the final day of the tournament, Plourde led by as many as nine strokes.

Her father Bob Plourde caddied for her on the first day and her boyfriend Hans Stromberg caddied the final two days of the tournament.

While holding her championship trophy and talking to her grandmother Barbara Wright, Plourde spontaneously held up the trophy and kissed it. Her mother Lynne caught the moment perfectly. 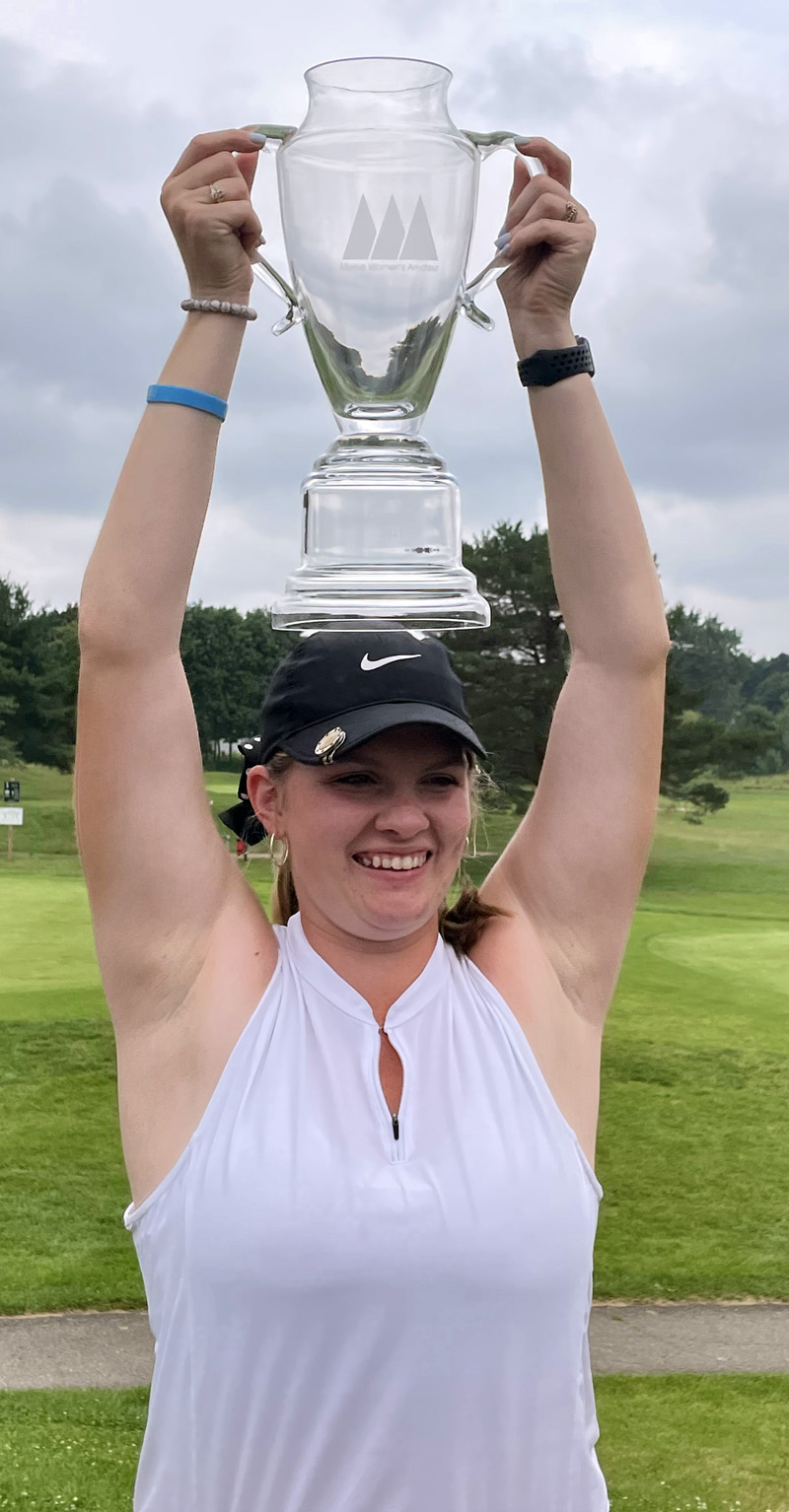 “It felt really good,” Plourde said of the victory, especially after a rough senior year at Centre College. “It just kind of happened.”

Plourde won the Golfweek tournament in Destin, Fla. and helped lead Centre to a national qualifying spot, which had always been a big dream of hers. She graduated this spring from Centre College with a bachelor’s degree in economics and finance.

Because of COVID-19, Plourde still has a year of eligibility, and possibly two. She will attend Berry College in Georgia this fall to get her masters in professional management. “And play golf,” she said.

Plourde said Berry plays in the same division as Centre and that they have always been competitive. With four or five new golfers entering the program this fall, Plourde said she is very excited to play at Berry.