Tom Justice, 81, of Jefferson, takes a shot at the CLC YMCA in Damariscotta on Monday. Justice plays men’s basketball during the CLC Y’s pickup games at noon with men a quarter of his age and up. (Paula Roberts photo)

Tom Justice, 81, of Jefferson, has been playing basketball on and off for 71 years. He moved to Maine nine years ago and started playing pickup basketball games at the CLC YMCA in Damariscotta.

When he moved to Maine, his son “begged him” not to run or ride a bicycle on the narrow Maine roads. He called the Y and asked Holly (Pendleton) Nelson if they had basketball for older people. “Holly said, ‘Sure, I’m 26 and I play,” Justice said. “I still laugh about it,” he added with a chuckle.

Justice has been a fixture at the noontime games at the Y in the summer months ever since. He winters in Texas, and on his last day at the Y before heading south, Borealis Breads owner Jim Amaral, another regular at the games, bakes him a goodbye cake.

Justice might not be the fastest or strongest player on the court, but he is a strong ballhandler and shooter. He keeps up with much younger players, including high school and college standouts.

Newcomers who think they can give the old-timer space regret it after he swishes his deadly set shot. “He’s money if he’s open,” fellow basketball player J.W. Oliver said.

Justice keeps active in the winter months too.

“I do a little running and bicycling down there. This was the first year I could not play basketball down there,” Justice said. “It has taken me awhile to get back into (basketball in Maine).”

He started playing basketball at the age of 10 at a YMCA in Niagara Falls, N.Y., where he grew up. He is a legend at his old high school, where he averaged 18.5 points a game his senior year and broke a school record with 31 points in a single game for the Cataracts. His high school team won its league championship and won the Western New York basketball championship in Buffalo his senior year, in 1953. 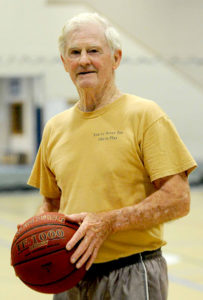 “We did a lot of fast-break scoring. Once we got the ball down the court, we played out front in a 2-3 zone. When they scored, then Don Dixon and I brought the ball up,” he said.

Justice made the all-city and all-league teams in football, and also received All-American honors. His senior year, the football team won its conference championship for the first time. His entire team made the school’s hall of fame.

He is a member of the Wooster College Hall of Fame, where he played halfback and cornerback in football in addition to playing basketball and pole-vaulting on the track team. “I was not a fast runner, very quick, but not fast in the long run,” he said. “I had to run a quarter mile in a relay once and it about killed me.”

An old girlfriend recently sent him a scrapbook of his playing days in high school and college, where he was a three-sport athlete, playing football, basketball, and track and field.

He attended Princeton for one year, then transferred to Wooster College in Ohio. He scored 40 points in a single basketball game his freshman year. He played varsity college basketball his junior and senior years.

He pole-vaulted in college as well. At Princeton, he cleared the bar at 11 feet, which earned him the most improved track man award. At Capital University in Ohio, he set a school record in the pole vault (with a bamboo pole) at 12 feet, 3 inches, although a newspaper account had him clearing 12’6″.

At 5’10” and 150 pounds, Justice was not your typical athlete. An article in his scrapbook written by Ernie Enfield, of a Wooster newspaper, described Justice: “Despite his lightning reflexes, he is slow afoot. Justice is a winner, an inspirational type who can play over his head.”

He attended two seminary schools and got a master’s degree in English. He taught high school English and coached basketball and ninth-grade football for a couple of years in Massachusetts.

He then had a “marvelous opportunity through the Ford Foundation” when he applied for and was granted a year’s sabbatical to improve education. He went to Leicestershire, England and studied at a school for grades five and six. He enjoyed working with the younger students, so he switched to teaching first and second grade in Waltham, Mass. for the last 11 years of his career. He retired at 62.

He continued to play basketball for 10 years after starting his teaching career.

At 40, he started running to get in shape. He read a magazine article about marathons, and realized his times were on target to run the Boston Marathon. So at the age of 45, he joined 8,000 other people on Patriot’s Day and finished in three hours and 12 minutes. He continued to run until he moved to Maine.

A divorce landed him in Lincoln County to be closer to his sister, and led him to playing basketball again. “There are a good bunch of guys over there now and (back) then,” Justice said of playing at the Y. He and his wife also participate in exercise classes at the Y a couple of days a week.

Justice, who, at 81, wears no knee braces or other supports, has been exercising all his life. “I think that is a key part of it all,” he said of staying young. “I tease people and say I came with this body and I’m going out with this body.”

He is a devout Patriots and Tom Brady fan. “The game of football has changed. (When I played), the point was to get someone on the ground, not injure someone. In spite of that, I still like to see Brady and company play.”

He used to watch the Celtics back in the days of Larry Bird. “I used to be an avid fan, but I don’t watch the NBA anymore because the game is so different. I watch March Madness and the pro playoffs, even though I cannot stand the referees.”

“I love the game, I really do,” Justice said of basketball. “It got rid of a lot of my aggression. A lot of aggression made me play well.”