The undefeated Oceanside girls basketball team held off the Lady Panthers to win the Kno-Wal-Lin tournament championship on March 11 in Rockland. Medomak led 10-7 at the quarter, led by two 3-pointers from Alyssa Creamer. After only scoring two baskets in the first frame, Oceanside got their offense going in the second to take a 19-15 lead into the half. The Lady Panthers took the lead with just under three minutes to play in the third period on back to back hoops from Julia Kunesh and Creamer. Aubrey Mackie hit a three and Abby Waterman scored to put the Mariners up by four. Autumn Ripley hit a big three with  30 seconds left to make it a one point game after three.

Oceanside opened the final quarter with a three from Mackie and a hoop from Ahlivia Morris to take the lead. Medomak pulled within one on a Abby Lash basket, Creamer foul shot and Maya Cannon basket off the glass. Foul shots from Anna Kingsbury and Mackie put Oceanside up by four. Medomak tied the game with four minutes remaining on two foul shots from Grace White and a basket from Ripley.

Woodman hit a big three  and Medomak was forced to foul. Mackie went four for four at the charity stripe in the final 35 seconds to seal the win. 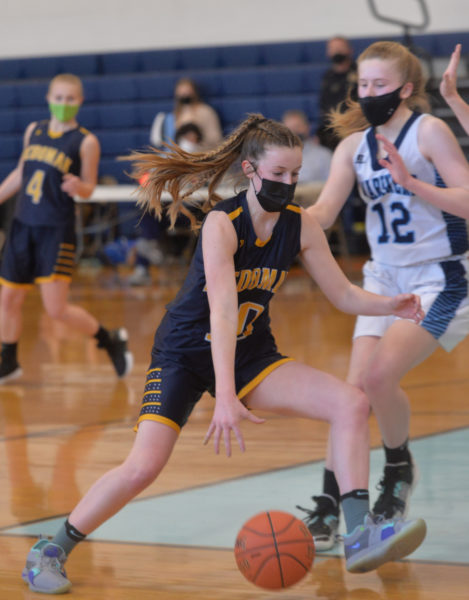 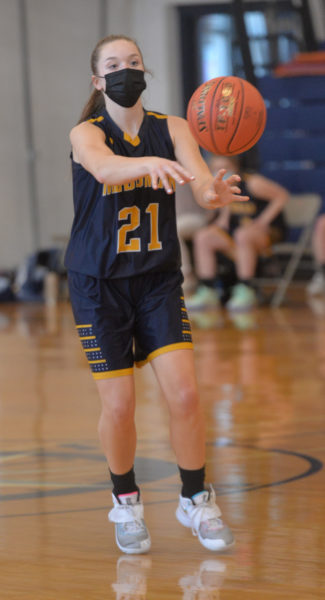 Alyssa Creamer passes the ball up the court for the Lady Panthers. (Paula Roberts photo)

Oceanside was led by Mackie with 23 and Waterman 10. Medomak was led by Creamer with 13 and Lash 7.