Oceanside girls basketball team handed Medomak Valley a 36-33 loss on the Panthers home court on Jan. 17. The two teams were tied 8-8 at the first quarter break. The Mariners scored the first seven points of the second quarter to take the lead for good. Oceanside built a 10 point lead early in the fourth quarter, before the Lady Panthers clawed their way back, pulling within two 1:15 to play. Emily Sykes settled two foul shots with 42 seconds to play to put Oceanside up by four. Abby Lash scored on a Sadie Cohen pass with 26 seconds left to pull within two. Grace Woodman hit a foul shot for the Mariners. Medomak was able to get off two 3-point attempts, but fell short. Medomak was led by Cohen with 14 and Kayla Donlin 9. Oceanside was led by Aubrey Mackie 14 and Woodman 11. 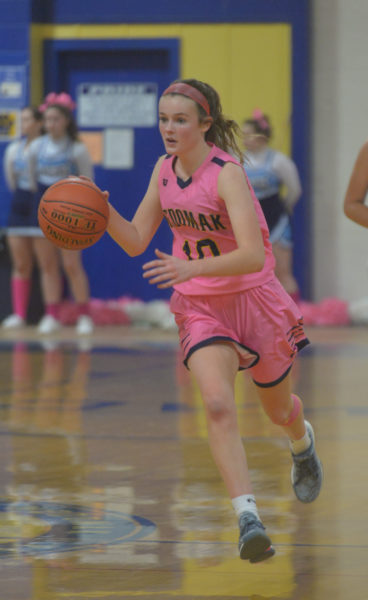 Abby Lash brings the ball up the court for the Lady Panthers. (Paula Roberts photo)