Medomak Valley baseball defeated Morse 1-0 in a pitchers dual on May 11 in Waldoboro. Matt Holbrook went the distance in the shut out win. Gavin Baillargeon pitched a one hitter in the loss.

Medomak scored the winning run in the fourth, when Garret Hutchins drew a walk, stole second, went to third on Blake Morrison ground out, and scored on a passed ball.

Isaac Simmons had the only hit for Medomak with a sixth inning single. Hitting for Morse were Gabe Morrison with two singles, and Jason Bussey, Calin Gould and Jansen Morrison with a single each. 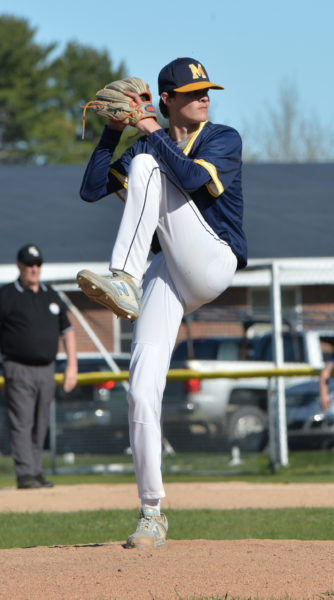 Matt Holbrook winds up for a pitch in Medomak Valley’s 1-0 win over Morse. (Paula Roberts photo)