Medomak Valley boys basketball team rallied from behind in the fourth quarter to pull out a 64-58 win over Lincoln Academy on Jan. 6 in the Eagles’ nest. Kory Donlin led the comeback charge with 13 of his game high 27 points in the final period.  Donlin sank nine of 12 foul shots. Lincoln led 19-17 at the quarter, 30-27 at the half and 44-39 at the end of three. The Eagles led by as many as 9 points in the third quarter. Gabe Lash added 18 points for the Panthers. Lincoln was led by Tucker Stiles with 20 points and Lucas Houghton 16. Medomak held LA’s leading scorer Gabe Hagar to six points.

Medomak girls defeated Lincoln Academy 54-33 in a KVAC girls basketball match-up of Jan.6 in the Panthers den. Medomak was led by Addison McCormick with 21 points and Kytana Williamson 10. Lincoln was led by Mariam DeLisle with 10 and Maggie Thompson 7. 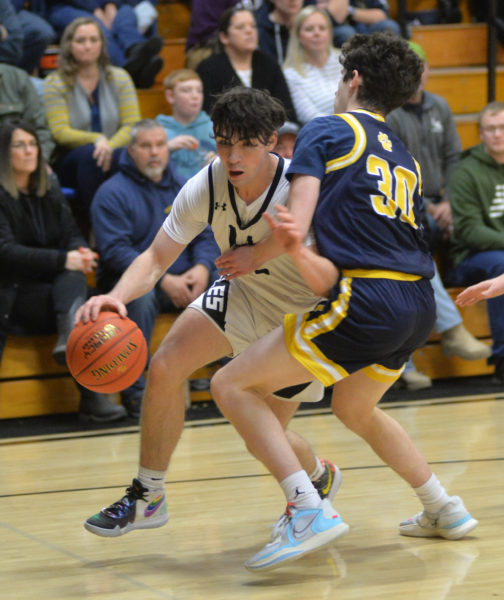 Kory Donlin goes inside for to of his game high 27 points in Medomak Valley’s come from behind win over Lincoln Academy. (Paula Roberts photo)