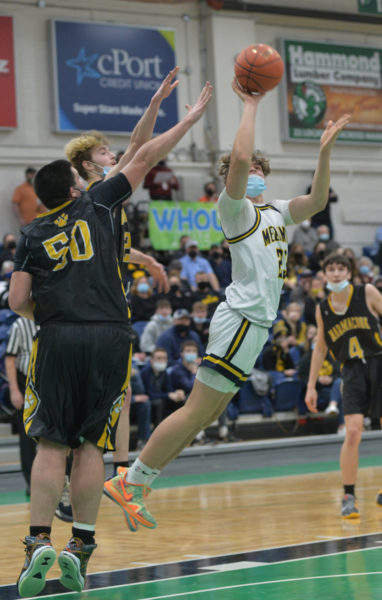 Finn Parmley connects on an off balance shot in the second quarter. (Paula Roberts photo) 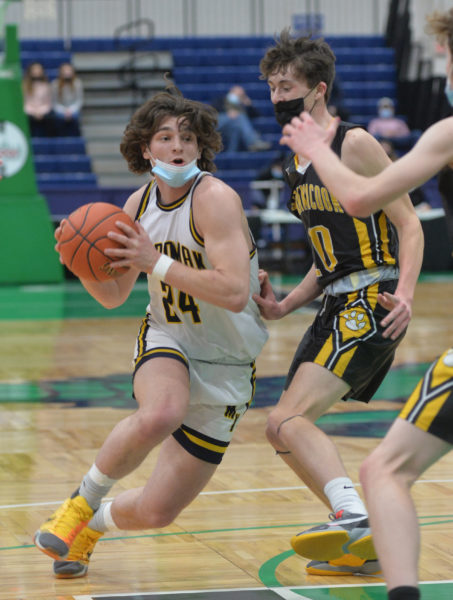 Medomak Valley boys basketball team defeated Maranacook 77-49 on Feb. 22 in a South Class B Regional semi-final game at the Portland Expo. With the win, the Panthers advance to the South B Regional championship game, to be held on Friday, Feb. 25 at 3:45 p.m.

Medomak jumped out to a 22-8 first quarter lead, including scoring the first seven points of the ball game. The Panthers held the Black Bears to single digits in each of the first two quarters, and led 37-16 at the half. Jake Bickmore went down with an apparent knee injury less than a minute into the second half. The Bears played a much more aggressive third quarter, but it was not enough to catch the Panthers. Medomak built a 28 point lead in the third, and led 54-30 at the end of three. Medomak’s bench saw plenty of action in the final period. Freshman Gabe Lash netted all 10 of his points in fourth. Medomak was led by Patrick McKenney, Lash, Bickmore and Trevor Brown with 10 points each. Maranacook was led by Tyler Hreben with 17 and Brayden St.Pierre 10.