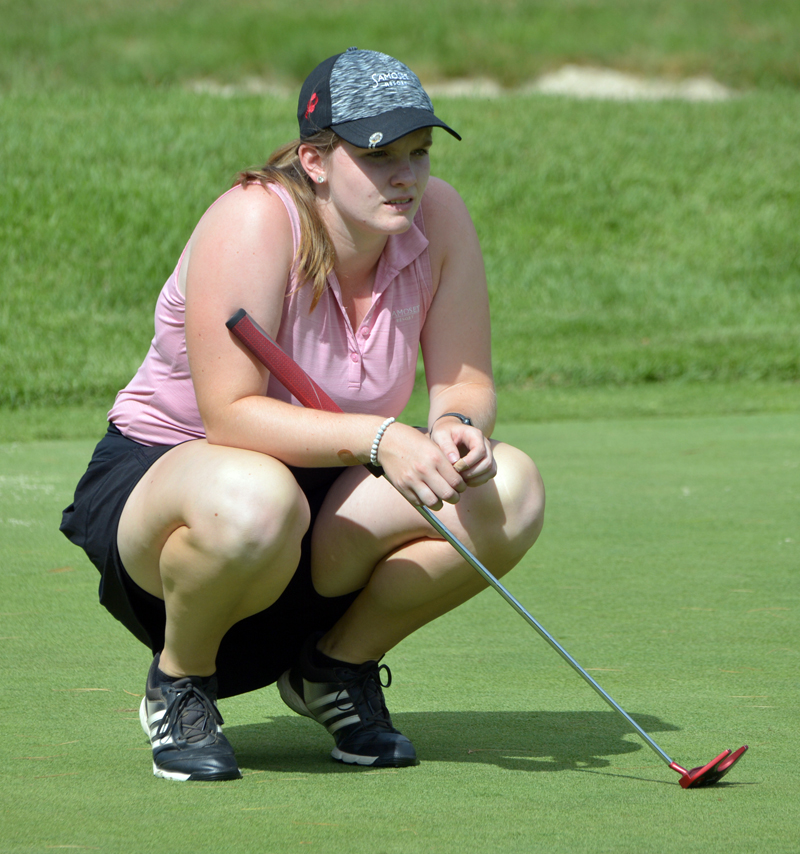 Bailey Plourde lines up her putt on 18 on day two of the Maine Women’s Amateur golf championship. (Paula Roberts photo)

Bailey Plourde, 21, of Newcastle, sits in second place at the Maine Women’s Amateur golf championship, after two rounds. Plourde, out of Sheepscot Links in Whitefield, jumped out to a 3-stroke lead on day one of the three-day golf championship, Monday, July 20 at Augusta Country Club.

Plourde, the 2018 Women’s Amateur champion, sat out last year because she was doing an internship in Kentucky. She wasted no time  getting back on top of the leader’s board, carding an even par 73 to take the lead.

Plourde sat at 4 under par after 11 holes on the first day, thanks to  birdies on one, seven, and 11 and an eagle on four, a par-5 hole. She had a couple of bogeys on late holes to finish the day even.

Golfers battled sweltering heat and humidity throughout the first round. Temperatures were 10 degrees cooler on day two.

Plourde struggled in the second round on July 21, shooting a 5-over 78. Haylock hit for par to take a 2-stroke lead over Plourde. Smith sits 7 strokes back.

Haylock, down by 3 strokes after day one, chipped away at Plourde’s lead. They battled even on the first three holes. Plourde triple-bogeyed on four and Haylock doubled to cut the lead to 2. A double bogey from Plourde on six drew the two players even. Haylock took the lead on seven with a birdie, then finished out the field with five more birdies and two eagles. Plourde finished with five birdies and just missed an eagle on 18, which would have pulled her within 1 stroke of the leader.