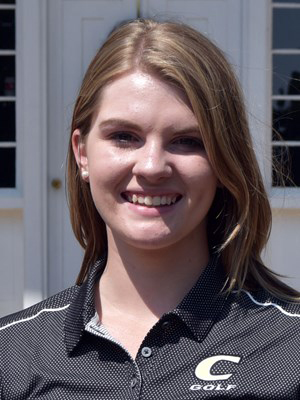 Centre College sophomore Bailey Plourde was named to the All SAA First Team after placing third in the conference championshhip. This is the second year Plourde has made the First Team. (Centre College photo)

Centre College sophomore Bailey Plourde, of Newcastle, has qualified for the NCAA Division 3 National women’s golf championship, to be held May 14-17 at Bay Oaks Country Club in Houston, Texas.

She is ranked number one out of the six individuals nationwide who qualified for the championship match.

Plourde has been selected to the Southern Athletic Association 1st Team for the second straight year. Plourde earned First Team All-SAA distinction after finishing third at the SAA Tournament on April 26 at Greystone G.C. in Dickson, Tenn. She shot an even par 73 on the second day of the tournament.

Plourde placed in the top five in all but one of her tournaments during her sophomore campaign, including three different tournament victories.

She collected a five stroke victory at the Transylvania Spring Invitational in early April with a 73 and 72 for a two day total of 145. Her scores marked the fourth time this season she has shot par or better.

Plourde finished the season with the lowest average round in program history.