Bailey Plourde, 18 of Newcastle, won her fourth straight Janet Drouin Memorial Golf Tournament, with a two under par 70 at Natanis in Vassalboro on Tuesday.

Plourde held a two stroke lead over Mia Hornberger after day one on Monday with a 72, and she held a five stroke lead over Liz Coffin going into the second and final day of the 36 hole tournament on Aug. 14.

Plourde hit for five birdies on day one of the tournament, including four on the front nine to score an even par.

On Tuesday, Plourde brought her A game, hitting a two under 70, including scoring 35’s on the front and back nine. Her two day total was a two under 142. Plourde shot six birdies on the day to beat nearest competitor Hornberger (153) by nine strokes on the day, and 11 strokes overall.

Coffin and Elizabeth Wilshire tied for third with 157’s. 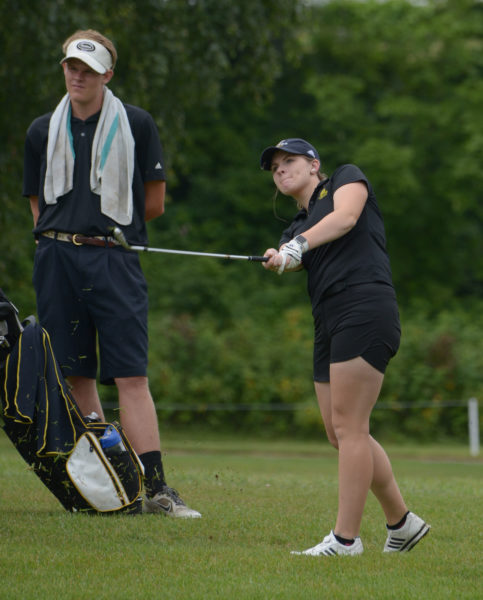 Bailey Plourde chips onto a green in Rockland earlier in the summer. Plourde won her fourth straight Janet Drouin Memorial Golf Tournament on Tues., August 14 with a two under par 142 in the two day tournament. (Paula Roberts photo)