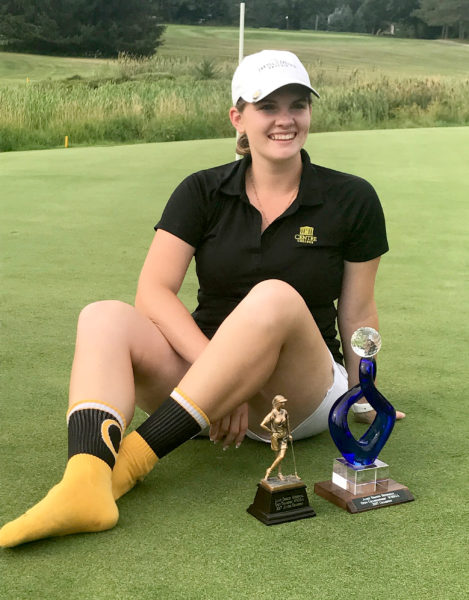 Bailey Plourde, of Newcastle, won her third straight Janet Drouin Memorial Open Championship on Aug. 14 and 15 on the Arrowhead course at Natanis in Vassalboro. Plourde has been crowned both the overall champion and junior champion for the past three years.

Plourde was tied with two former champions, Micki Meggison and Liz Wiltshire, for the lead after day one, with a seven-over 79. She struggled Monday, only hitting five out of 14 fairways, and finished with one eagle, two birdies, seven pars, six bogeys, one double bogey, and one triple bogey.

Plourde rallied on Tuesday, stroking a one-under 71 to capture a three-stroke victory over Natanis Golf Club owner Wiltshire. She hit 11 out of 14 fairways and finished with four birdies, 11 pars and three bogeys.

She has won three state schoolgirl golf championships (tied one year) and was runner-up a fourth year in her four-year career at Lincoln Academy. She has won the Maine Women’s Amateur Junior Championship four years in a row and has been runner-up overall the past two years.

Plourde heads off to Centre College in Danville, Ky. this week, where she will be a freshman and play golf. She is the daughter of Bob and Lynne Plourde, of Newcastle.