Mark Zaccadelli, 22, of Bristol, could always hold his own on a wrestling mat at Lincoln Academy (class of  2013) and on a dirt track in motocross. On Saturday, April 29, he shattered 11 Maine powerlifting records and unofficially set a American record in the bench press. The record is unofficial only because there were not three national judges present to witness the lift.

Zaccadelli came in first and set the Maine records at 59 kilograms at the 2017 USA Powerlifting New Hampshire Championships for Juniors ages 19-23. The USA Powerlifting meet was held at Contoocook Valley High School in Peterborough, N.H.

Impressive numbers, considering his small 130-pound frame and the fact he has only been lifting for 14 months.

Zaccadelli knew going into the competition that, barring injury, he was going to break the Maine records. His lifts from all three events (bench, dead, and squat), were added together, and using the Wilks coefficient (a formula based on the participant’s weight), he was crowned the overall champion for juniors.

He trains at Resolution Fitness in Waldoboro. Although he lifts on his own, his best friend, Nick MacPhee, of Bristol, and Ryan Martin, of Bath, “push me along and answer any questions I have. Every once in awhile we get together to work on form. Form is everything,” Zaccadelli said.

“I can’t thank Nick and Ryan enough for everything they have taught me,” Zaccadelli added. Additionally, he gives “special thanks” to Natashia McBurnie and his father, Mark Zaccadelli Sr., for supporting him in his ventures. Fans Nick Pease and Cadisen Willis drove to New Hampshire to help cheer him on, for which he was both surprised and thankful for their support. 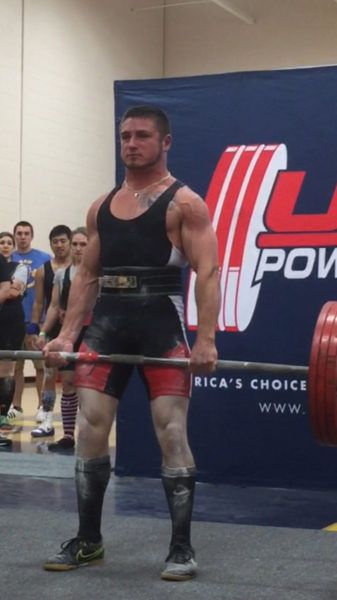 He competes in RAW, meaning he uses no equipment to help support his body, except for a lifting belt. Zaccadelli stopped lifting five days before the competition to rest his muscles and stopped eating carbs two days before the event. Additionally, he cut four pounds of water weight to trim down for competition.

Zaccadelli is hoping his win in New Hampshire will qualify him to advance to a regional meet in August. “You have to be invited,” Zaccadelli said.

The USA Powerlifting Federation is the biggest powerlifting federation in the country. They have strict rules and prohibit any steroids and other performance-enhancing drugs. Zaccadelli had to provide a urine test after his championship win. “I was tested so I will probably get invited,” he said.