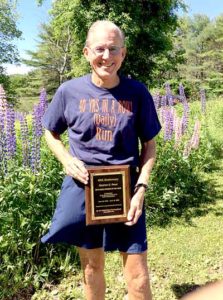 Every day for the past 40 years, Dr. Stephen D. Reed, of Wiscasset, has laced up his running shoes and gone on a 3-mile run. Reed reached the 40-year milestone Thursday, June 16. His streak is the ninth-longest of its kind in the world, and is at the top of the charts for Maine.

While most streakers run a minimum of 1 mile a day, Reed set the bar higher for himself and runs a minimum of 3 miles. As of June 16, he has run 3 miles a day for 14,611 straight days. “I felt it gave the streak more credibility,” Reed said of running 3 miles a day. “I have been fortunate over the years.”

Thirty-eight of those years were spent entirely in Maine, running through sleet, freezing rain, and snow in the winter. For part of the past two winters, he has run in Florida.

Reed started running around the time he started his medical practice. He ran in high school at Lincoln Academy and at Bowdoin College. “I kind of got away from it in grad school,” he said. He decided he needed to start some kind of exercise program, so he started running. Before he knew it, he had not missed a day in over a year.

Of his 40-year running streak, Reed said, “for the most part it has been a pleasure. There was an addiction quality to it.”

Reed’s streak will likely come to a close in late July, when he plans to have hip replacement surgery on his left hip. “I can change my mind, but I don’t think so,” he said.

Two almost unbearable runs are among Reed’s worst days pounding the pavement, and on both days he could not even see the hardtop. The first was during a blizzard a couple of winters ago. “I kept waiting for conditions to improve, but they didn’t. The roads had not been plowed. There must have been 6 inches of snow on the ground. One of the local policemen came around, rolls the window down and looks at me, and says ‘I have no idea what you are doing out here, but you are my hero.'”

His worst running experience came in New Orleans a couple of years ago. “We had a rainstorm and the streets were flooded. There were 5 or 6 inches of water along the streets,” Reed sad. Once again Reed tried to wait out the storm, hoping the water would recede. When conditions did not improve and daylight was waning, Reed sloshed his 3 miles in a half-foot of water.

“Those were a couple of bad weather days. For the most part (the days) were all do-able. There were a couple of other snowstorms and icy conditions that were hazardous. Fortunately I did not fall down. The rain and heat were not a problem.”

When he first started his streak, he could run the 3 miles in 20 minutes or less. Today it takes him closer to an hour thanks to osteoarthritis in his left hip. A recent X-ray showed the degeneration in his hip was a nine on a severity scale of one to 10.

Reed has run with significant pain. “It is amazing what you can get used to,” Reed said of his built-up tolerance to pain. “With dedication and a little (obsessive-compulsive disorder), I manage to get it down.”

Overall, Reed considers himself a very lucky man when it comes to health ailments. He sprained his ankle badly and refused to get an X-ray, because if it was broken his streak would end. Instead he ran 12 ragged laps on the Wiscasset High School track. A month later an X-ray showed the ankle was not broken.

He ran with pleurisy, an inflammation of the lining of the lungs. “That was painful. The slightest deep breath would catch me and almost drop me to my knees. I managed to get in 3 miles, but I don’t know how I did it.” Neither colds, flu, nor intestinal ailments stopped Reed from his daily devotion. “Overall I have been very fortunate. I have not had anything that would prevent me from the streak.”

“I am relieved I got to this point. It has been a benchmark of mine. I think I knew in the back of my mind, if I could get to 40, I could savor it and get the hip thing done,” Reed said.

Reed is a dual streaker. Besides his 40-year running streak, he has run 27 straight Boston Marathons. In his 68 years, he has run a total of 70 marathons. Of his 40 years of running, he has run 35 competitively. He estimates he has run over 1,000 road races, including 5K, 10K, 5-mile, and 10-mile races, as well as half-marathons. He gave up road races after developing hip problems. “I missed the fellowship more than the race,” he said.

Reed said no one comes “remotely close” to his dual streak record.

After hip replacement surgery, Reed hopes to continue his Boston streak. “I could continue to go down there and torture myself. If I get the hip repaired, I should be able to complete Boston in the time constraints.”

When he met with a surgeon on June 15, the doctor did not rule out running a marathon. “I think that kind of sealed the deal. I think that makes it easier for me to give up the daily streak, that I can do the Boston thing in the foreseeable future,” Reed said. Reed’s goal is to extend his Boston streak to 30 years.

Reed said he does not know whether anyone has run the Boston Marathon with an artificial hip.

His T-shirt reading “27 in a row” was a crowd-pleaser at Boston last April. “There was amazing crowd support. People really cared. They could tell I was impaired. It was a distraction from the pain, high-five-ing people.”

“I think running has kept me younger, both in body and in mind,” Reed said. “It added another dimension, doing something good for myself and the good emotional aspect. It fit well with my profession, was handy and easy to do, and only needed a pair of running shoes.”

While his 40-year streak is near and dear to his heart, Reed is at a point where he has to make a quality of life decision. “It is a new chapter for me,” he said.

Looking back over the past 40 years, Reed said “it has been a wonderful experience. It has not been without turmoil or toil, but overall it has been wonderful. I cannot think of a better extracurricular activity for myself. It was a really good fit, with the socialization, the people I met, and the friends I have made through the years.”

Would he do it again? “Yeah, probably,” he said. “Ninety-nine percent of the time it was a pleasure to do it.”